One of the best parts of gardening is digging! It's hard, or can be, it's messy, or can be, it's hot sweaty work, or can be, but it's fun! At least when you are done you can feel you've actually had an effect on something. Not like spending 2 hours on the computer trying to pay your phone bill (this morning's entertainment, not) or glazing pots in the studio (good useful work but no payoff until they are fired) or phoning people who really don't want to talk to you... just get out there and dig something up!

It was gorgeous today, sunny, cool, leaves turning red on the maples over my head, and I just felt I had to work off some of the cobwebs I'd picked up the last few days. So I attacked the bit of terracing at the back of the Hillside Garden today. The path, at Studio level, takes a right-angle turn around the Studio to the bottom of the Sand Hill Garden with a steep slope to the left. Under this bit of slope is the huge granite intrusion the builders found when they were digging for the Studio footings. In fact, this lump of granite is why the Studio is slightly off-square in relation to the house. It was either move the rock, tricky since it is attached to China, or move the Studio. Anyway, there isn't much soil there and what there is, I brought in, by wheelbarrow.

Right at the beginning of making this garden I stuck some rescued Yucca plants up there - they seemed to suit. And they've been very happy there, blooming magnificently in June and July and being a good dark focal point in the border. Unfortunately, some Lily-of-the-Valley pips must have come with them and they have been happy there too. Not to mention some seeded in Asters, Japanese Anemones, one lonely Helenium, and any number of weeds. A spurge of some kind went a bit mad there too. So it was a mess, not to mention that a rather nice Bearded Iris, with a soft yellow flower, was looking sad and neglected in among the jumble.

It took me a few hours, but a small section of this area now looks much better: 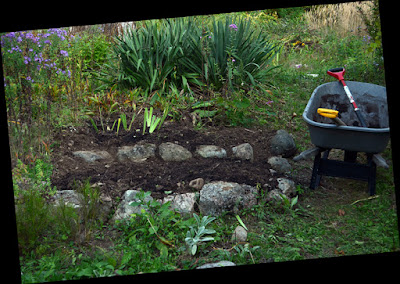 The bit I planned to work on is the lower of the two dug-over strips you see here. It was about 6' long and 2' wide, so not huge. It was hard going, though, because the soil there is solid heavy clay and it was packed with Lily-of-the-Valley pips and roots. My plan was to get it ready, then lift the Iris and re-plant it in the new space. But when I came to do it, I realized it would look wrong anywhere but one level higher up, so I had to dig over a second bit the same size. I had a time getting the rocks out, but they lined up nicely and they'll hold the soil back just perfectly. Remember that under all this there is a huge rounded granite outcropping!

Now tomorrow I'm planning to move a brighter yellow Iris over to the left of the pale one, behind the aster you can just see, and then maybe, maybe, add in a bit of a beautiful white Iris I have. Not sure if that won't be entirely too pale, but it might also be quite dramatic. Then I need to think of some short leafy things to put in between the irises and the other things for next year. I don't like looking at the iris foliage in the summer, too shabby. I hadn't planned on having any Bearded Iris, told myself, definitely NO IRIS. But then a friend arrived and said she was splitting her Irises (she's serious about Iris) and here were my share... (She also brought me a pail of strawberry plants and I dutifully planted them and they were doing fine but a bear came and ate the plants so that solved that problem. Bears don't seem to eat Iris.)

Now just so you don't worry that I might run out of digging opportunities, here's a view of the whole 'bit': 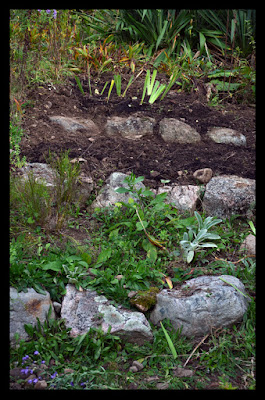 Two more levels to do! But no more Lily-of-the-Valley, whoo hoo!
Posted by Lis at 6:03 PM 2 comments: 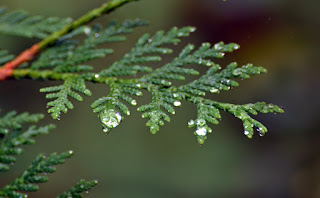 We walked our woods,
Cedars stitched with rain,
Pines edged in mist.

You had today, and were content.
I, still having yesterday,
wanted tomorrow too. 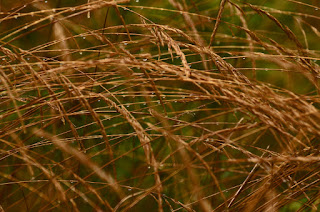 We walked our fields.
Arches, steeples, songs and bright windows,
All were grass.

The pale wind brings,
And takes away.

These Words for Kip are for my beloved dog, Kip, whose life ended yesterday. Good-bye, dear companion, your today was too short.
Posted by Lis at 5:50 PM 4 comments:

Two Solidagos and a Turtle

Well, a Turtle-head. Chelone glabra, White Turtlehead, seems to be having a good year. Not sure if it is a perennial or not, but most years I only see a few along the marsh edge, and this year there are many. One of the best plants is this one: 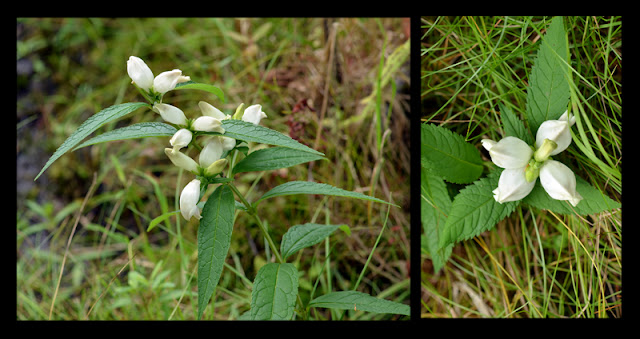 You can see the water to the left - these things are tricky to photograph if you are wearing sandals. There were actually a number of stems and each had quite a few flowers, but I was reluctant to step into the water. I just did not want to risk sinking to my knees and losing my sandals on the way out! The name, which is a little puzzling, could be a reference to the flowers' profile, but looking at this group of four flowers, I'm wondering if it isn't really a reference to the shape of the flowers as you look straight down on them. Don't you think they look a lot like tiny white turtles heading off to the four different directions?

Chelone glabra, and its (non-native) cousin Chelone lyonii, are both good garden plants. White Turtlehead needs a bit more water - a damp area will keep it happy - while Pink Turtlehead does fine in normal conditions. Both like a sunny spot and both are about 30" tall.

In a shadier area, two Solidagos are starting to bloom. One is S. caesia, Blue-stemmed Goldenrod. 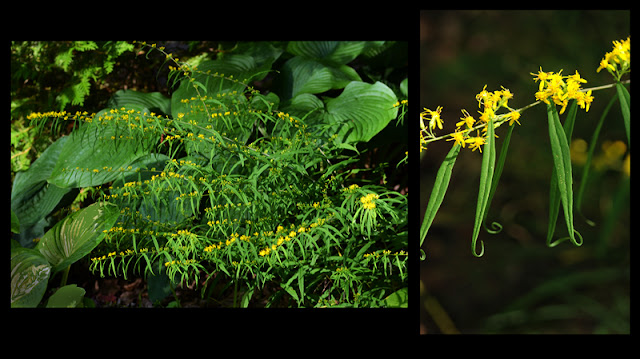 One plant I put near some hostas has filled in beautifully and is starting to show real presence and personality. I love the way the stems arch over to fill their space, and the way the leaves hang down below the flowers. The tiny curls on the ends of the leaves are charming too. S.caesia is easy to grow - a dependable perennial, not fussy except it doesn't like too much sun (half a day, or dappled by a high tree is fine) and not too 'spread-ish'. It does expand, and it does offer a few seedlings now and then, but it is easy to control. A mature plant will be about 2' tall and will fill a space twice that wide.

Solidago flexicaulis, Zig-zag Goldenrod, on the other hand, will attempt to monopolize more real estate than you might wish to allow it. 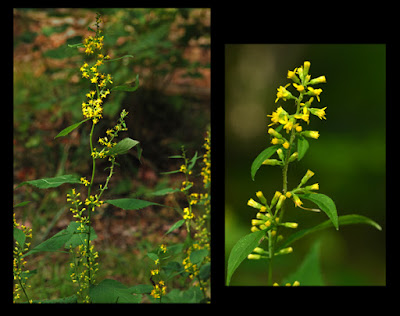 The plants don't seem to self-seed much, but they keep getting wider... and wider... and wider. You just have to be more determined than it is, and chop it back in the spring. The big thing about this Goldenrod is that it does well in solid shade. The plants are about 18" high, dark green, and healthy looking all summer. In September it is covered with typical Goldenrod flowers held high on ziggy-zaggy stems.

Both of these 'Goldies' are worth having in the garden - interesting form, bright flowers at a time when flowers are becoming scarcer, and extra 'garden points' for having something unusual!
Posted by Lis at 12:50 PM No comments: