Drought. A word to strike fear in any gardener's heart, and especially in the heart of one who has acres of woods and loves ferns.

We haven't had any real rain since early in May. The woods are crisp-dry, which, combined with all the trees down after the wind storm a few weeks ago, brings to mind another word, even scarier than the word 'drought' and that word is 'fire'. Pine Ridge is a rocky ridge, with very little soil, and other than the beaver pond and the marsh, it is very quick to dry out.

The drought in 2012 did a lot of damage, particularly in the soil, and I was just starting to see some signs of recovery. Before 2012 there were Grape Ferns and Mushrooms and Indian Pipe plants... after 2012, there were none of these. The Botrychiums, the Mushrooms and the Indian Pipes all depend on in-soil mycorrhizal fungi, and I believe the drought decimated these. I was hoping they would recover and that new Grape Ferns and such would develop. The fern spores at least would still be around and would grow again. That's why this spring I was happy to see a few new Rattlesnake Ferns, small but coming, and a few of those small red mushrooms.

Sadly, the ferns have withered, and I haven't seen any more mushrooms. Rosie and I just went to a long walk in the woods (actually more a climb over/duck under, push-through-branches kind of a scramble) and we didn't find any. To add insult to injury, the ticks, which are supposed to be busy with other things in July, were out in force. I picked several off my pant legs, and one off my hand where it was scouting for a good drilling site.

I guess I'm feeling worse about the current dryness because I was hopeful that things were getting back to normal. Isn't that what we gardeners do? We're always convinced: 'next year will be better': next year the wind won't smash down all the Bearded Iris, next year the Roses will bloom for the garden tour, next year the resident Bear won't eat all the strawberries, plants and all, next year it will rain... but sometimes the spirit flags and a feeling of defeat sets in.


On the up-side, I have about 6 Monarch Butterflies wafting around the garden, there seem to be heaps of birds, including a comical family of 4 young Eastern Phoebes which swoop through the Studio and back out making twittering noises the whole time, and there's a small flower bud on one of my hardy cacti.

Canada Day - 37 Degrees in the Shade

It being ridiculously hot, unbelievably humid, and the day of my Canada Day party (later, later), Rosie and I went for a slow wander to find things to appreciate on this festive day.

We admired the Siberian Iris. These very dark purple ones are always a lot later than the other ones, and the colour is amazing. I once parked a small clump of them beside the driveway and they have become a decent sized patch. They like the same conditions as the Wild Lupines which also like this damp spot. 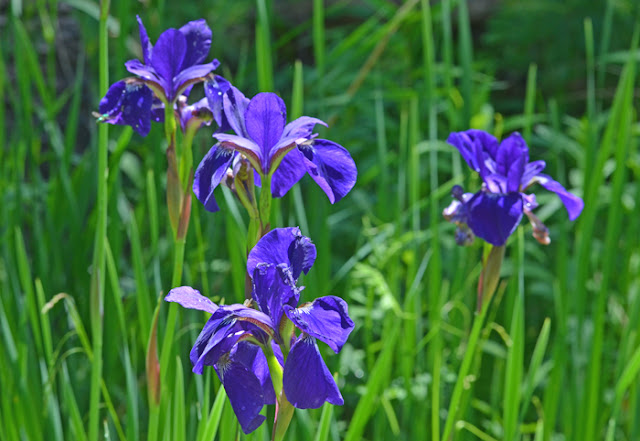 I really must move some of them into the Hillside garden where they'll give a much-needed jolt to all the yellows there. 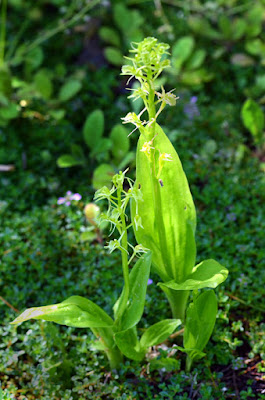 My little orchid has re-appeared this year, still in it's mat of Thyme.

It's probably, at least I think it probably is, Listera loeseli. The flowers are green (the yellow ones are old and past their prime) and tiny.  Loesel's Twayblade isn't uncommon, but I've never seen it except where it came up in my Rockery a few years ago. 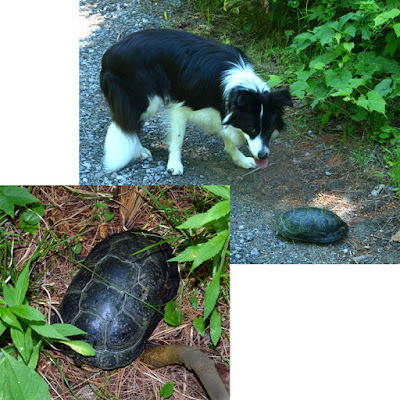 She didn't dare get too close, and watched me until I caught up. When you spot something weird and possibly dangerous, you need The Boss nearby! A nice, rather large Blandings Turtle. She refused to stick her head out, and because I was expecting someone to drive in, I moved her off the gravel into the edge of the woods. We get a lot of turtles coming inland from the marsh to lay eggs. So far this year we've seen about a dozen Painted Turtles, one Snapping, and one Blandings.

The Wild Geraniums, Geranium maculatum, are in bloom. Some are whishy-washy mauve or pink, others are deeper mauve or a lovely bright white. They are very much a woodland edge plant, always seeding themselves along the line where the woods give way to the fields. In my garden, that means along the fence row. I've moved them back into the Sampler Garden several times, but those never seem to thrive and every year new ones, which do thrive, appear at the edge. 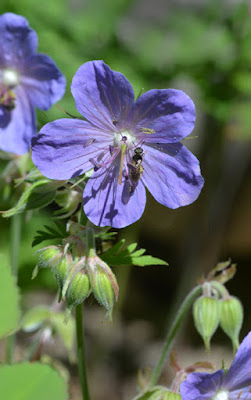 There are still some Milkweeds near the end of the driveway. There used to be a lot of them, and they used to attract Monarch butterflies, but over time the area has become too shaded and most of the Milkweeds have disappeared. When the house was being built we had two large storage trailers parked there and it was amazing to see the Monarch chrysalises attached to the trailer sides. They were turquoise green and all attached at about 3' above the ground.The few Milkweeds that are left are beautifully budded today, and I love those  strong muscular shadows. I've only seen one Monarch this year, but there may be more later. 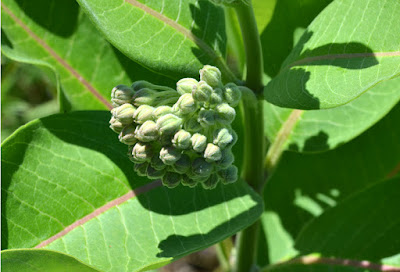 Milkweeds smell wonderful when in bloom, a smell that always means Summer to me. Soft sweet milkweed scent, buzzing bees, a whiff of freshly cut hay, the drone of small planes  in the distance as they practice their landings and take-offs on the Ottawa River nearby, all these mean Summer to me.

And heat, of course. Which we certainly have today.

Back home, Rosie and I check on our Swallowtail caterpillars. I have seen Yellow Swallowtails here, usually during Lilac time, but no Black Eastern Swallowtails. When a friend announced he would have some Black Swallowtail caterpillars for people to adopt, I asked for one. He probably meant children... but, hey, I'm a child in here somewhere. Of course, one would only give me one butterfly, and establishing a population takes at least two, and the right two, so I was delighted when he gave me a whole bunch of them. The only part I hadn't properly thought through was what to feed them, but I'm thinking now that if they all pupate quickly, I'll have just enough Dill and Parsley to see them through. I have lots of Rue, which the Yellow Swallowtails seem to like, but very little Dill. With luck my remaining Parsley plants will recover enough to feed the ones that will hatch from the eggs the current ones will lay after they turn into butterflies, and maybe I can get some more Dill plants. Otherwise they'll have to eat Rue.... 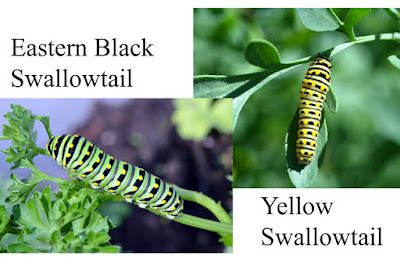 The Eastern Black caterpillar, on the left, is much greener than the Yellow one, which makes entirely too much sense but seems to be true. One other thing I found out, neither one will eat greenery that has been picked. I tried to feed them just a leaf of parsley but uh, unh, they would only eat it when I pulled up the whole plant and put it in the box with them. Now two of the caterpillars (Eastern Blacks) have pupated and another one seems about to do so as well. They go through, according to The Butterflies of Canada, four or five 'instars' or stages, from an egg to a butterfly. Here's the pupa stage: 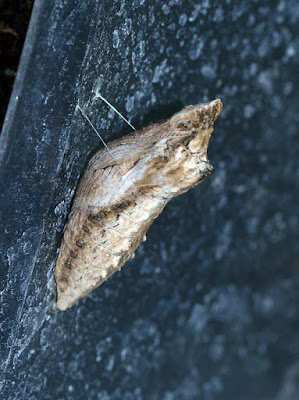 Odd looking thing. I admire the guy wires! While I was watching it, I saw it give a big wriggle, almost as though the creature inside was re-arranging itself. The guy wires held!

Being Canada Day, I then picked a few red and few white Roses and arranged them in a small bowl. 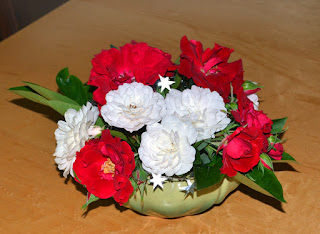