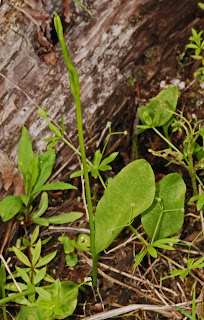 Northern Adder's Tongue Fern, Ophioglossom pusillum, is a very small, 'un-fern-like', fern, which is not often found because it is so hard to see among the grasses and low vegetation it typically grows with. I have been a bit keeping my eyes open for it but never really expected to find it.

Last Sunday I went to one of my favourite natural areas, the Eagle's Nest Trail near Calabogie, and trudged up the trail well past the actual lookout. I was determined not to slow down until I was past the lookout because every other time I've gone up there I've gotten sidetracked by the rock face and the Woodsias and such and never gotten past them. This time I kept going, in spite of the heat, the big and hungry deer flies and the lure of the many small cliffs all along the way. I did side-track a bit, following a small side trail to what is likely a blueberry picking area, but didn't see much there so went back to the main trail. After a couple of hours I was getting a bit bored! The trail is actually somewhat barren because the ATV-ers damage everything in their path, and what they don't destroy they cover with mud, so very few interesting plants survive there. Anyway, by this time I was hungry and decided to stop at the next possibly interesting spot and have my sandwich. I came to a tiny bog and pushed through the undergrowth to get to it. There were some orchids, not in bloom yet, and a nice tree to sit on for lunch. The deer flies were so bad I sprayed my hands and neck (the only exposed parts of me other than my face) again, figuring that if nothing else, they might get their feet stuck in the spray, and unwrapped my sandwich. I took one bite and glanced down at my foot and saw something. 'What did I step on?' I wondered. 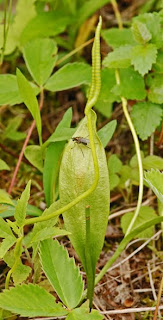 I looked more closely and discovered I was in a fairly large patch of Northern Adder's Tongues. What a surprise! What a shock!

The plants were mostly quite small, only about 4" high, but some were taller, and the fertile fronds extended up to about 12" in some cases. There were many plants in about three large patches. I counted to 50 in the first patch and stopped counting. They were growing  in the crevices in rocks which stuck up just above the surface of the tiny bog, and among various grasses, sedges, orchids, Twinflower and other low things. They were indeed hard to see because of being the same colour as the grasses.

I don't remember what my sandwich tasted like.
Posted by Lis at 9:31 AM No comments: 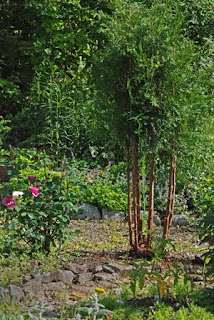 What the heck is this? Good question!

A couple of years ago, a little Eastern Cedar started to grow at the corner of my herb garden. It was kind of cute so I left it. Over the next few summers it got bigger and bushier and by this spring it was crowding the rose bush on the one side and the lungwort on the other... I looked at it for a while and couldn't make up my mind what to do. I didn't want to completely remove it because it did nicely define the corner of the garden, but my rose and other things needed more light and space. In a moment of, perhaps, madness, I trimmed the lower branches right off and sculpted the rest of the bush into a sort of teardrop shape. Not sure if I like it or not, but so far it's kind of growing on me.

It's either a very large and clumsy bonsai, or a very small hedge-on-sticks!
Posted by Lis at 1:27 PM No comments:

I looked at that title above, Bracken Fern Attack, and thought, 'oops, that's ambiguous. Does it mean I attacked the Bracken, or that it attacked me?' Then I decided both were true so I'm leaving it like that!

Part of my Fern Trail through the woods winds along between the edge of the marsh and the steep slope of the ridge. Every summer the Bracken surges up and threatens to engulf the entire trail, the ferns along it, and the trees and such on the slope. The only thing I can do is pull it. One good thing about Bracken, it apparently contains a bit of a natural herbicide. You can throw the pulled-out fronds on the trail and they act as a mulch and growth suppressant. I've done this every year for a decade now and while there is never any less Bracken, at least doing this keeps it from competing too much with the other ferns. It's a bit of a job, and one that needs tough gloves, but it works.

The other attack today was on the poison ivy patch on the new spring hillside garden. Naturally, as soon as I opened the area up by removing a lot of the small maples and such, the Poisonous One moved right in. I sprayed it with the last of my Poison Ivy Killer. Normally I am totally opposed to stuff like that, but I am so allergic to PI that it has put me in the hospital twice and I just can't risk it again. I once lived beside someone who insisted on burning it, and the fumes carried the oil into my lungs and I was sick for a year. My doctor couldn't figure out why my lungs were so inflamed. This was the same neighbour who built a beautiful deck on the back of his house, beautifully stained and finished, and then got out his chainsaw and cut down a huge poplar which fell, you guessed it, across the new deck.

Anyway, the trail is walk-able again and the PI's days are numbered... heh, heh, heh.
Posted by Lis at 6:01 PM No comments:

This morning I went to the Native Plant Sale at the Fletcher Wildlife Garden to sell some of my baby ferns and wildflowers. The Sale is a fund-raiser for the Garden. You can bring plants and swap for others, or buy from people like me. The Garden itself is behind the Interpretive Centre and features many native plants. You can see how they can be used in a typical home garden. There's a small pond and a winding path..... a woodsy trail, bird houses and so on. I didn't have time to walk around there this morning so I'll have to plan a visit soon.

The Sale was quite busy, lots of visitors. I talked and talked! Dorothy Dobson from Connaught Nursery gave me a tray of baby Pitcher Plants, Sarracenia purpurea, to sell for her. (Check out their website - they sell bedding plants and vegetables as well as native plants, and have a native plant garden you can visit -  www.connaughtnursery.com) which I picked up at the Carp Farmers' Market this morning. Going out with them I walked by a vendor named David who sells wonderful cut flowers and he looked at the tray and asked me what they were. I said 'baby Pitcher plants, aren't they as cute as puppies?' and he studied them and looked at me and said, 'Well, actually, they're kind of ugly'. This made a great story to tell the people who looked at them at the Sale! Who can resist an ugly puppy?!


It was a lot of fun to catch up with other keen native plant gardeners, some of whom I haven't seen since the Fletcher Sale last year. A great boost to the gardening enthusiasm. I'm thinking we should have some sort of a native plant gardening/photographing/studying network in our area. So if you happen to be in or near the Ottawa, Ontario, area, let me know and we'll figure something out. It ought to be easy in this day of websites and email lists. Not that I know how, but I'm open to suggestions. I know we have naturalists groups here, in fact, I belong to a couple of them, but they do tend to be interested  mostly in 'fauna'. It's not that I'm not interested in birds or insects or whatever, but they seldom have programs of particular interest to us plant fanatics.


Speaking of fauna, I just saw an amazingly beautiful Leopard Frog in the rock garden. Big, and his markings were crisp and clear. Green, brown and a kind of brown-y gold. I ran in and got the camera, but unfortunately, he (she?) had moved on by the time I got back there. Maybe I'll see it again tomorrow.
Posted by Lis at 2:55 PM No comments: