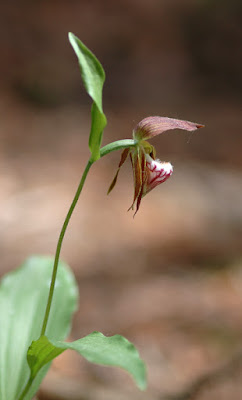 Suitable only for the tiniest, lightest and most dainty of fairies... hidden under the dark skirts of Spruce and Cedar in the cool forests of the Canadian Shield, Ram's Head Ladyslipper is a lucky find for a hiker in the woods.

Not common anywhere in its range, Cypripedium arietinum is the smallest of the Ontario Ladyslipper orchids. It occurs in cold woods around bogs and marshes,  usually in well-shaded and damp spots. It's tiny slippers are only 3/4" long, hardly longer than the mosquitoes which are often seen sitting on the fringed edge of the 'shoe'. Plants are mostly less than 12" high.

Growing C. arietinum can be difficult. In some situations it does very well and may even become a sizable clump, but in most gardens it is a reluctant and short-lived visitor.

Rather larger, Yellow Ladyslipper comes in two sub-species. C. parviflorum ssp. 'Makasin' which is  slightly larger,  and C. p. pubescens which is a good deal larger. 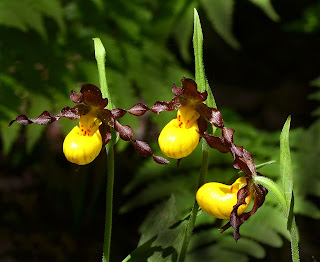 This is C. p. 'Makasin', with its tiny slippers held up in the sun in front of some ferns. Each slipper, or 'lip', is barely 1" long. The other petals, three sepals and two petals fused into one structure which looks much like the sepals and curves under the lip, are very red, and wonderfully curled. 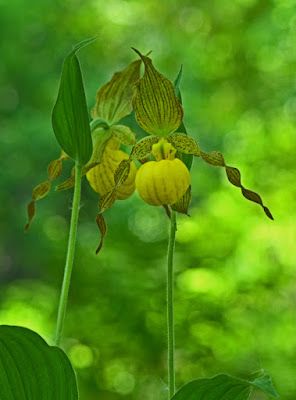 C. parviflorum ssp. pubescens is the other sub-species. It is larger in all respects, with the slippers 2" or more in length and plants up to 18" tall.

You may find this one in several different habitats. It is frequent on alvars, in dry sunny banks above lakes or rivers, and in the shade along marsh or bog edges.

Growing the two Yellow Ladyslippers is not too difficult. Neither one is overly demanding, although like all orchids, they do not tolerate crowding or trampling.
Pink Ladyslipper, C. acaule, is the fussy member of the family. It seems to require very specific conditions, particularly the presence of certain soil fauna, in order to thrive. Even then, colonies or groups may persist for some years, then suddenly vanish. They may also suddenly re-appear! When several large Pines blew over in 1997 at Pine Ridge, two years later there were many Pink Ladyslippers in the new clearing. They grew and bloomed there for 18 years, then they disappeared again. 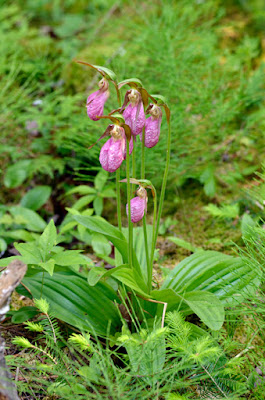 Certainly, this Slipper doesn't like too much shade, and it needs good drainage as well. It it practically impossible to grow in the garden, so enjoy this one in the woods!

The largest of our Ladyslippers is of course the Showy Ladyslipper, C. reginae. 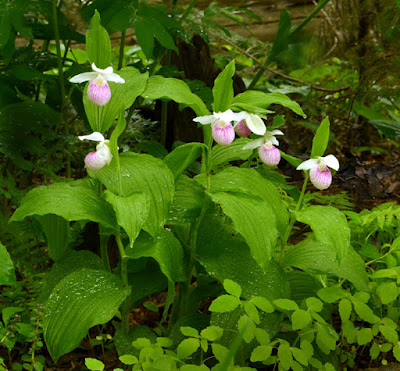 It forms large clumps of its 2' high stems, carrying one or two of its 3" slippers at the top of each one. It likes water at its feet, and it especially likes fresh, moving,  water at its feet. It is found in swamps, bogs and fens. Occasionally it grows in dryer conditions, which is lucky as it means we can grow this one in our gardens. A slightly shady spot with good humus-y soil and adequate moisture in the early summer is all it takes. 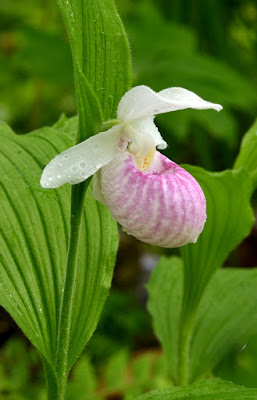 Now is the time to see C. reginae. It is just coming into bloom now, and will soon be at its peak. A great place to see them is at Purdon Fen, which has quite an interesting history. The site, which is West of Almonte in the Lanark Highlands and is administered by the Mississippi Valley Conservation authority, hosts literally thousands of Showies and comes complete with visitor information and boardwalks.