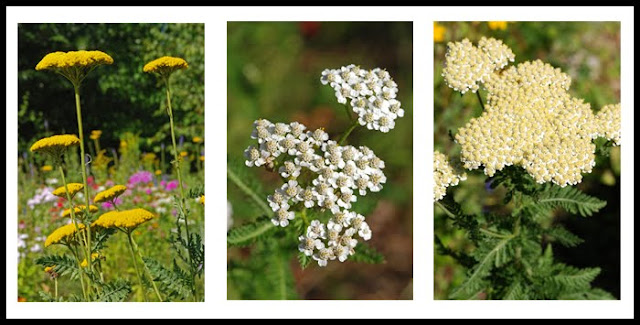 The pink, red and rust coloured Yarrows, by the way, are of quite different parentage, and behave very differently, at least for me. They are much shorter, need to be divided every year to keep them from running out, and do not do at all well in a drought. I keep one clump going in the Herb Garden just to be able to say I have Yarrow.
Posted by Lis at 6:00 PM No comments:

A Word from the Trowel

Hi Folks,
This is Lis's Trowel speaking. If she's going to leave me out all night with my head stuck in the sand in the Cactus Patch, well, no more Ms. Nice Trowel, I've kept my mouth shut long enough. Who do you think does all the work around here, anyway?And don't tell me not to be bitchy, I'm blunt at one end and sharp at the other so what do you expect?
What's with this Cactus Patch thing, anyway? Doesn't She know that this is zone 4? Cactuses (yes, I know the La-di-das say 'cactii', but that's not us, is it?) are desert plants. They do not grow where snow covers them about half the year. They like to be hot, not cold. This is not a desert, except maybe a cultural desert. Mind you, She does listen to the CBC in the Studio, maybe that counts for something, but given how little classical music is left in their programming, I'm not sure that it's much. It's so bad that in the afternoon She turns the radio off, which leads to Her humming while She works.... not pretty, I assure you. But I digress. My point is, it's not cactuses that want to grow here.
Bugloss wants to grow here. Viper's Bugloss, Echium vulgare. A perfectly good plant with no airs or graces. It has nice blue flowers, too, which you can't say cactuses ever have. Oh, and it's prickly, too. So, why does She insist on pulling it out and leaving those Opuntia fragilis wusses in the ground?
Opuntia fragilis 'Potato'. Sheesh. Who ever heard of a plant called 'Potato'? Except maybe a potato, I guess. A lumpy green thing, that's all it is. Never a flower, nooooo.
Another thing that wants to grow here is Bladder Campion, Silene cucubalis. Now, there's a name for you. Sounds like another vegetable, doesn't it. Anyway, She keeps trying to get rid of it but it's pretty smart. It has its roots down way deep and they're kind of grippy so it's impossible to pull them up. Hee hee. Even spraying them with a nasty weedkiller doesn't bother them too much. They come right back. I like those guys, tough is the word. Not like that Opuntia polyacantha that She keeps fussing over. It shrinks every winter and looks like s..t in the spring but thanks to all the fussing it does look a little better by about now. It did bloom once, too. For about three minutes early one morning before anybody was out of bed to actually see it.
Crown Vetch, Viccia cracca, wants to grow here too. It gets pretty cosy with Opuntia basilaris var. aurea, which is smart because She can't hardly get it out from between the prickles without pulling out most of the cactus pads. At least that thing blooms. Large yellow flowers, which I think look pretty good with the blue Vetch flowers. Fetching, in fact.
Oh, apparently Crown Vetch, Bladder Campion and Bugloss aren't 'native', whatever that means. Well, excuse me.
Oh, oh. I hear we're going to weed the Cactus Patch this afternoon. Ow, my poor skin.... ow, my handle, ow.... 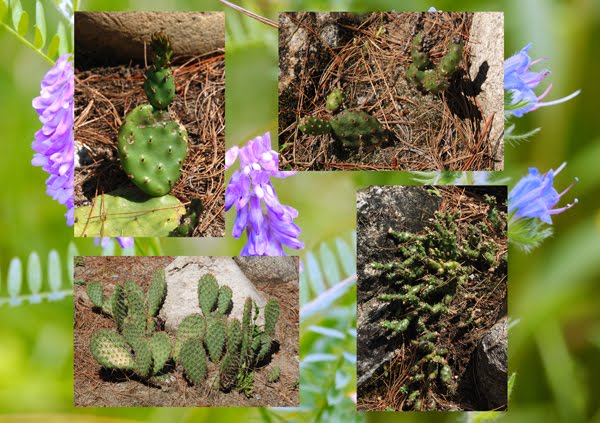 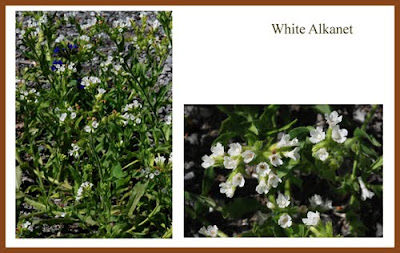 (If anybody would like some seeds of White Alkanet, drop me a line.)
Posted by Lis at 7:45 AM No comments: