First, let's just get that frog down*.

Long story short, I ran into trouble with the planned William J. Cody Memorial Fern Garden back in 2012. Partly my fault, partly politics, but work came to an abrupt halt. Much discussion, thinking, committee work later the Emerald Ash Borer did an end run and destroyed the Ash Woods and the Fern Garden with it. While what happened to the Ash Woods was rather awful, this did open the door to a new plan for the Fern Garden and late this summer it was decided to have it as the back of the Backyard Garden. This area was just being reclaimed and a Fern Trail looked like a good fit.

Here is what the area looked like in August: 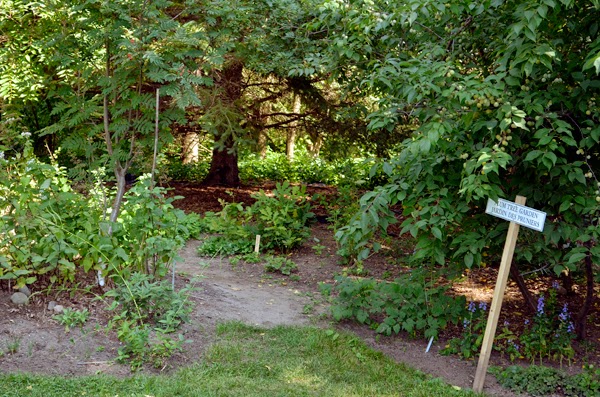 Undergrowth had been cleared but the space was pretty empty and undefined. The view above is to the east. The view to the west included the slope up to the upper pond: 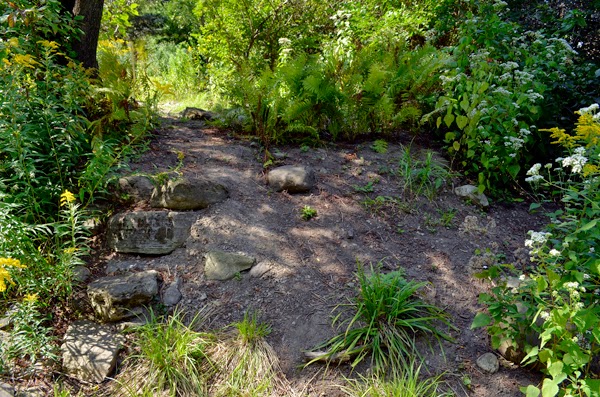 The obvious steps were an invitation to kids of all ages to rush up to the pond, poke around annoying the frogs, trample the Ostrich Ferns and then step on the planted sedges on their way back down.

Isabelle Nichol, the Model Backyard Garden Manager, arranged to get the spruce tree's lower branches trimmed back, and for a couple of Algonquin landscaping students who wanted to work some volunteer hours to  remove some old black plastic and wheelbarrow in lots of wood chips to make a mulch barrier at the back of the space. It was wonderful how much better the space looked after that was all done! I spent a couple of hours one rainy Saturday and used white and yellow rope to mark off spaces to plant ferns.... then the students dug these over and added compost. 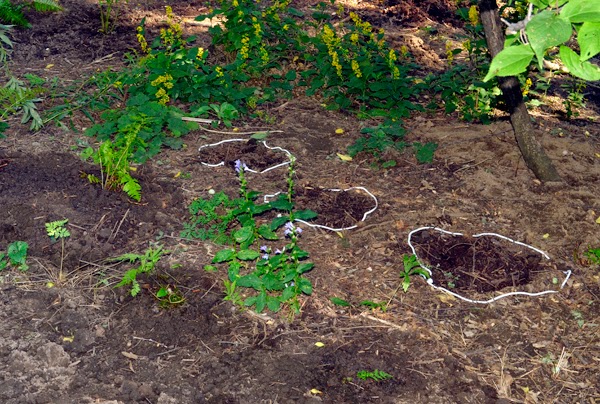 Joan Darby came and together we moved almost all the ferns from the Ash Woods into their new homes. 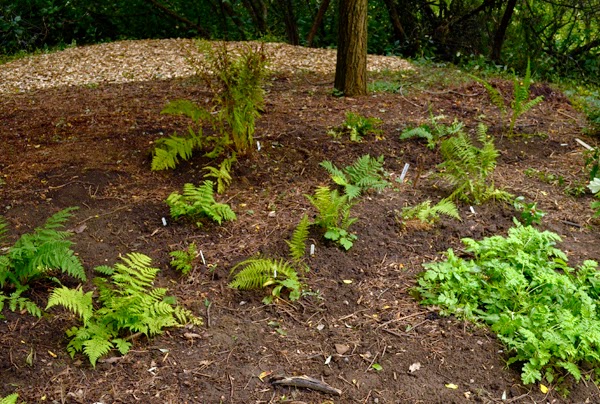 A day or two later, Jay from Jaydell Landscaping came with his crew and installed a wonderful stepping stone path. 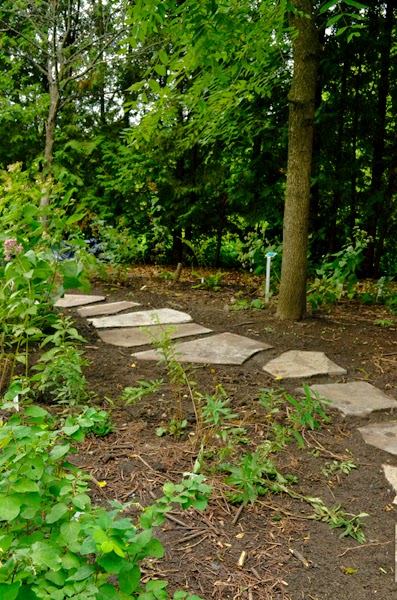 The next area of attack was the slope to the upper pond. We moved the sedges.... collected rocks from the Dept. of Ag's massive rock pile.... dug down to solid ground for the lowest row of rocks and made a rock wall: 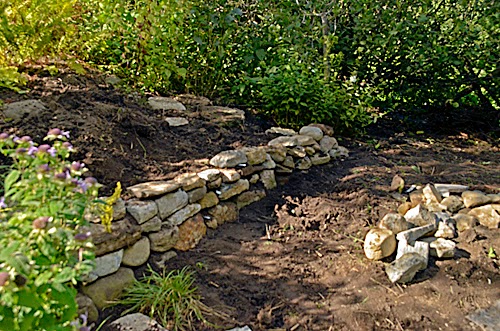 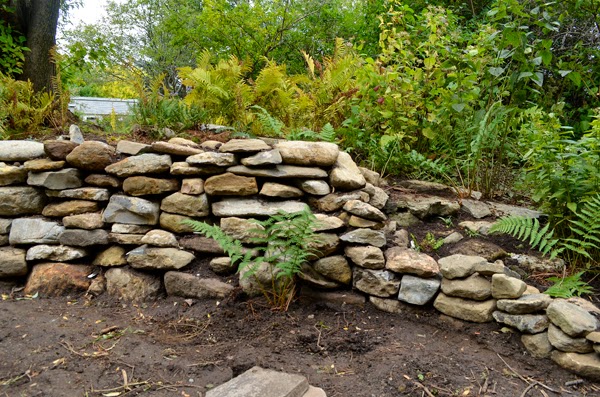 I would have liked more slab-shaped rocks, but by back-filling the wall with other smaller rocks and tightly  packing soil in behind it is probably pretty sturdy. Here you see it with some of the rock-loving ferns planted. Marginal Wood Fern is scattered around and some Polypody Ferns are installed at the top (hard to see here). On the right there are a few Walking Ferns and others which need shady rocky spots. We'll see if they establish before winter, but if not we'll re-plant in the spring.

The students moved the Ostrich Ferns, Malcolm ("I'm the shrub guy") pruned a huge overhanging shrub, and we re-planted the sedges. 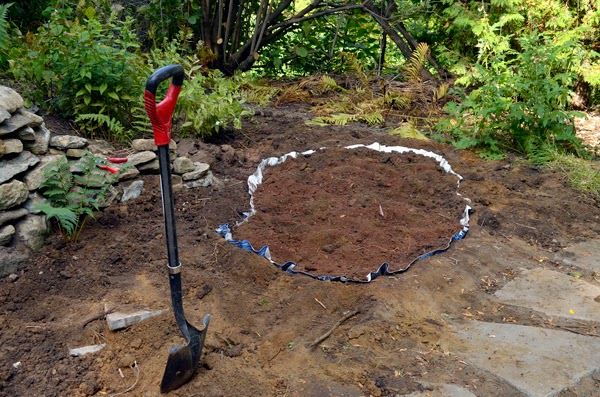 What you see here is the start of the Wet Boggy area. I dug out the oval you see, about 2' deep, then laid down old pond liner. I poked a couple of holes in the bottom and a few more about 6" down from the top. Then I re-filled it with a mixture of the sand from the hole, peat moss and topsoil. This is an invention by someone called Holman, so is called a Holman Bog. It's a trick to provide a spot that stays damp (even wet) in an area that would normally be dry. After re-filling, you cover the edges, plant and water well. You can't really see it, but the plants thinks they are growing in a bog. Here you see some Marsh Ferns, Crested Ferns and a few other things which I hope will 'take' before winter: 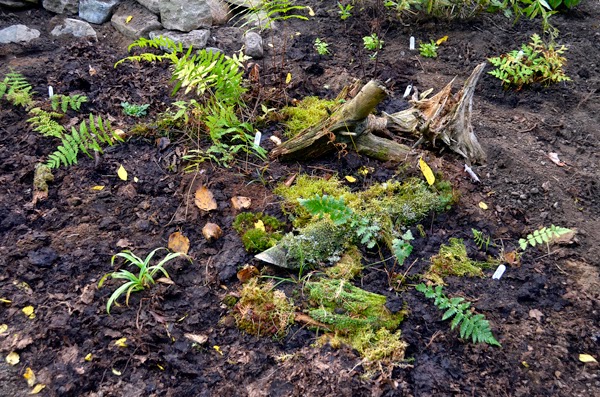 Meanwhile, I had impulsively mentioned to Isabelle that a stump would be a nice focal point for the middle area and she loved the idea. I knew when I said it that I had such a stump, but now I was in a quandary - I liked that stump in my own garden! I looked all over my place for another one, but they were all huge and wet, or had trees still attached, and were too heavy or too far away to move. I mulled it over for a while, but just when I'd almost decided there was nothing for it but to give away my lovely stump, I realized it was in the way of a path I wanted to make anyway. Then I was happy to find it a new home! Gordon, another of the Fletcher volunteers, came and helped me move it into my truck. Here it is: 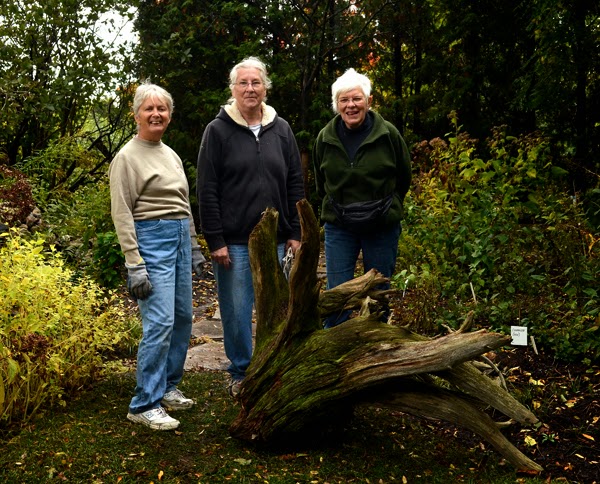 That's me in the middle, with Joan Petit on my left and Joan Darby on my right. You can see we're pretty pleased with ourselves! 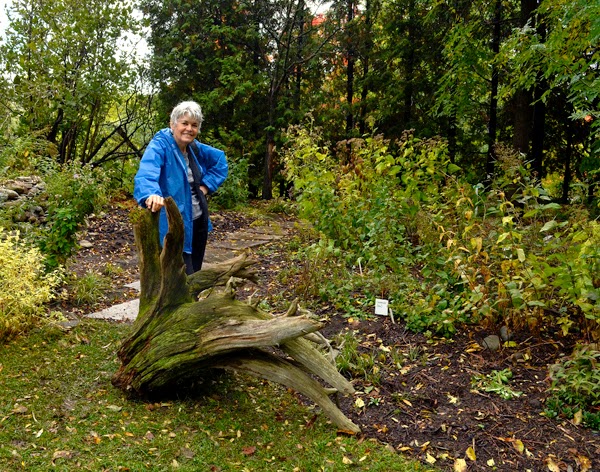 Isabelle came to see how things were going - she's pretty pleased about the stump, too!

Team Joan dug two more bogs, one of each side of the stump in the centre bed: 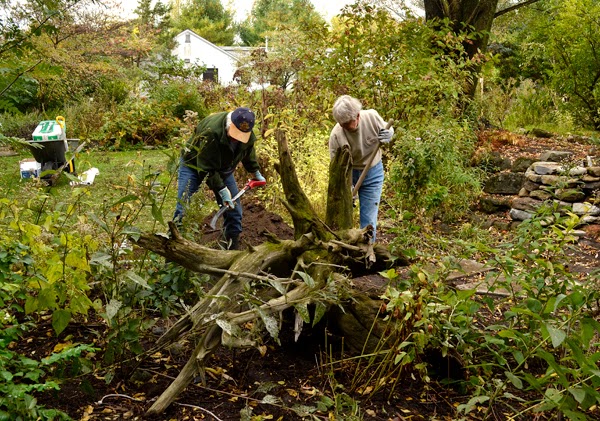 Eventually there will be three Cinnamon Ferns in front of the stump and three Interrupted Ferns behind it. Some of these were donated by Dan Faber, an early supporter of the project, and I'm happy we were able to rescue his plants. 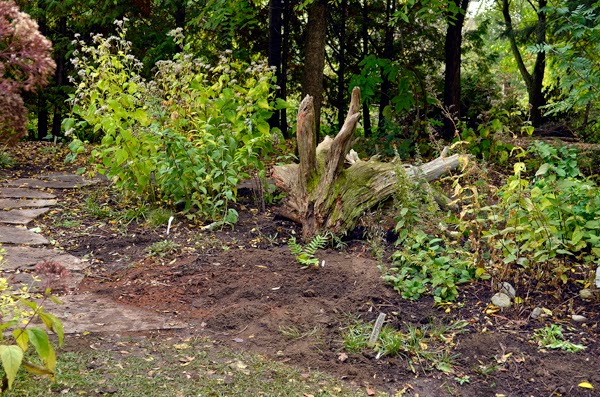 * Mark Twain once said that you should start every day by swallowing a frog. Once you'd done that, your day was bound to improve!