Every year, the July garden astounds me. There is so much bloom I can hardly imagine what will be left to bloom in August... or September. We've had a very 'grow-ish' summer so far, rain just when we needed it and not too much heat so the flowers are the happiest I've seen for a long time.

One could almost ignore the weeds. Not quite, but almost. Parts of my garden aren't too bad. The Sampler Garden, which is a shady woodland filled with ferns and spring wildflowers, looks fine. A few stray Fleabanes, a small patch of Enchanter's Nightshade, a rambling white-stemmed Rubus that needs to learn to behave itself, but overall it is in good shape. If anyone came to see the garden today, I could take them there and not be embarrassed.

Elsewhere, however, it's a different story. Behind the Studio the horsetails and the primroses are engaged in deadly battle and the Baptisia has taken over more real estate than many a small city garden. The Hillside, while spectacular, is dense with seedling Foxgloves, errant Phlox, and Coneflowers. But such Coneflowers!

They all started from one plant of Echinacea purpurea purchased years ago. It promptly seeded and I soon had a whole patch. The patch included some lovely white ones (and I'm a pushover for the white version of anything) which are nicer than the white one usually sold as White Swan. White Swan seems, to me, rather stodgy. The flowers just don't have grace, and a Coneflower is all about grace.

Below the pink flower you see a yellow Coneflower. This is E. paradoxa. I grew it from seed. A whole package of seed exchange seed gave me one plant, but it has become large and energetic. The flowers have unusual drooping curved petals in a shiny clear yellow. They have elegance as well as grace.

Two years ago I got four seeds from one of the heads on E. paradoxa. It either doesn't set seed much, or else the birds beat me to them. Anyway, I planted the four seeds and the following spring three of them germinated and grew into good-sized plants. I planted them out and this spring two of the plants returned. One bloomed, and I was amused to see that the flowers have the gracefully drooping form of E. paradoxa, but the colour, more or less, of E. purpurea. Actually not quite the colour, it is a bit more yellow, almost a peach colour. The plant is also tall, has narrow leaves, and flops. We can tell which block this chip is from! 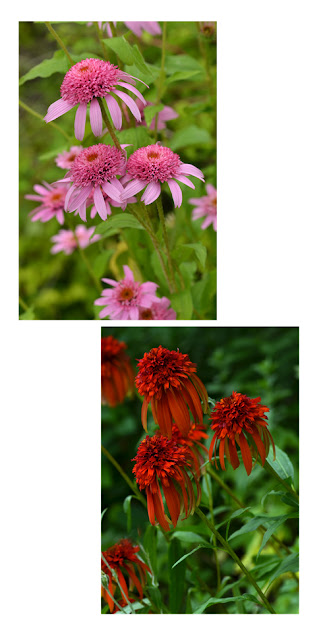 The nurseries have had great fun with Echinaceas, putting such cultivars as these on the market. I like this soft pink 'fluff butt' one, but I'm not so sure about the reddish one. There are a whole swarm of orange/rust/red Coneflowers, many of them named after hot foods like Cherokee Pepper or Hot Lava, well, I guess that's not a food. I think this one is called something with Paprika in the name. It's attractive, but even harder to fit into a colour scheme than the usual Coneflowers. I'm thinking of moving it next to some yellow Daylilies. Since those are blooming up a storm now too, I can walk around and pick the one that needs a little Paprika in its life.

One good thing about these garden Echinaceas, they have fibrous roots and are easily moved. There are a number of other species, such as E. pallida, E. simulata, E. tennesseensis and others, which are quite hardy here and have seeds which the small birds relish, but they have tap roots and you'd better be very sure of where you want them before you let them get large. I tried to move an E. angustifolia and not only did I have trouble getting it out of the ground, my efforts were rewarded as they so often are and I haven't seen it since.

In addition to the E. paradoxa cross, I also accidentally got a lot of plants which I surmise are crosses of E. purpurea with E. pallida. The latter is very tall, has stunning large flowers with drooping, twisting petals, and very narrow leaves. The patch of Coneflowers which came up beside my Crabapple Garden (I probably left some gone-to-seed stalks there and the seeds tumbled out) is a grand mixture of all different plants!

The top picture is of a plant which has uniformly 'dance-y' flowers. They open flat and stay more or less so, but the petals twist a bit. The plant is fairly short (for this group) and compact.

The next one I like because the flowers are darker than most and the stems are a beguiling dark red.

The bottom picture is of a plant which has soft pink and white blooms.Their petals never droop, it stays with the crisp daisy shape throughout the flowers' lives. This one will look very good with a pale yellow Daylily and some Shasta Daisies, of which I also have about a million. They seed too, but there isn't a lot of variation in the offspring.

Shastas are a large part of the chaos of the July garden. They don't bloom for long and you'd better deadhead them as soon as they turn shabby or you'll never get to the end of them. Looking at the patch of them on the Hillside I see that discipline will be required, not in the flowers, but in the gardener. I'd better get those seedheads off and not get side-tracked into general weeding.

And now, just to relieve all that pinkness, here's a picture of one of the bluest flowers I know. I'm going to call it Willow Gentian because there is no hope of me spelling its botanical name. No matter, it's a wonderful plant, and unlike my Coneflowers, never clashes with anything. 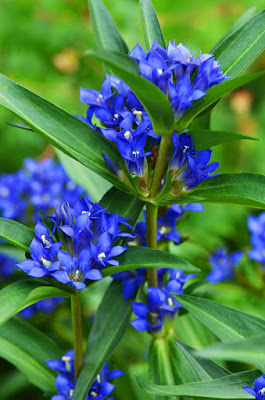