No, not a corsage ornament for a lady with a questionable job choice!


But an actual orchid,  Platanthera Hookeri, or Hooker's Orchid. It is a not-uncommon find in the woods in our area, although there are rarely very many plants. Most 'colonies' consist of one to a few plants, but luckily they tend to be long-lived.  Like many of our native orchids, it does not deal well with competition, so you will normally find it in bare and shady spots under such trees as Eastern White Cedar or White Spruce. On occasion you may find it under deciduous trees as well. 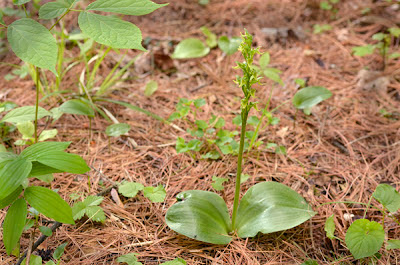 This shows the plant in my woods in a very typical situation - under some pines, in a bare spot, well-drained, but shady and cool, and accompanied by such typical companions as Violets, Wild Lily-of-the-Valley, Solomon's Seal and Wild Sarsaparilla.  The two large leaves immediately tell us it is one of the 'pad' orchids, which are in the Platanthera gang, and the green flowers tell us it is P. Hookeri. By the way, when a botanical name is a person's name, you may give it a capital letter or not, as you please. I like the capital, it reminds me that the plant was named after a real person. 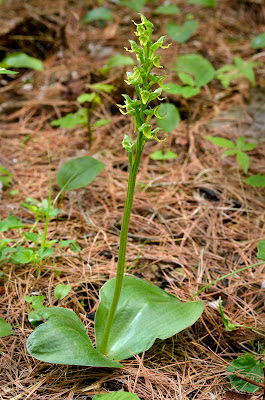 There are two other 'pad' orchids in our area: P. macrophylla and P. orbiculata. Neither of these have green flowers. Both have larger leaves, and the leaves of P. orbiculata are, as the name implies, quite round. 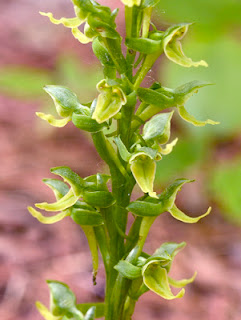 Here you can see the long spur, typical for the Platantheras, and the 'hooked' shape of the lip. I don't think John Lindley, another prominent early botanist who named the plant, intended the pun!

These are not orchids to grow in your garden. If you happen to find one, photograph it, admire it, salute Sir Hooker, and move on. Who was he?

Sir William Jackson Hooker was a botanist, botanical illustrator, lecturer and organizer who was active in England during the mid 19th. century. He put much effort into amassing an enormous herbarium, one that became very well-known in his time. He is credited with having helped to revive Kew Gardens, and it is noted that his son, who succeeded him at Kew, was as popular and successful as he was.

My reference makes no mention of the state of  his morals.
Posted by Lis at 7:13 PM No comments:

Went for a short walkabout in the garden this morning (after a night of very welcome rain) and was surprised at how many purple things were in bloom. I remembered going through a purple phase many years ago, and with a smile and pang for my youthful self, realized that I still like purple.