As expected, the snow did come. It was beautiful, white, fluffy, did its usual sitting-on-top-of-seed-heads-looking-cute thing, looked picturesque on branches and shrubs, generally made the world look like a new place, and so on, but we are going to skip right over all that and take a look at a few plants that flower very late in the season.

You can't of course do anything about them this year, but you can make a big note, and underline it, in your garden notebook, to get them for next year. 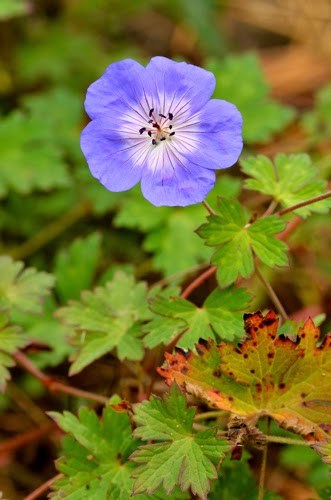 My first suggestion is Geranium 'Rozanne'. Whatever its ancestry, it probably does not include the dreaded G. sanguineum, so you don't have to worry about it taking over the world, er, your garden. It sprawls, usually gracefully, draping itself around the legs of taller perennials. It looks wonderful twined in with one of the taller ornamental grasses, or around a clump of Siberian Irises. You do want to place it at the front where you will be able to admire its large flowers.

'Rozanne' starts blooming in June, goes on all July, takes a short break in August, and surges back with a burst of fresh blue flowers in September. It is still in full bloom in November. After a frost its leaves develop attractive yellow and red edges and the flowers, which are, in my opinion, already bluer than the other 'blue' geraniums, are bluer than ever.

She's best in a well-drained spot and fairly lean soil. 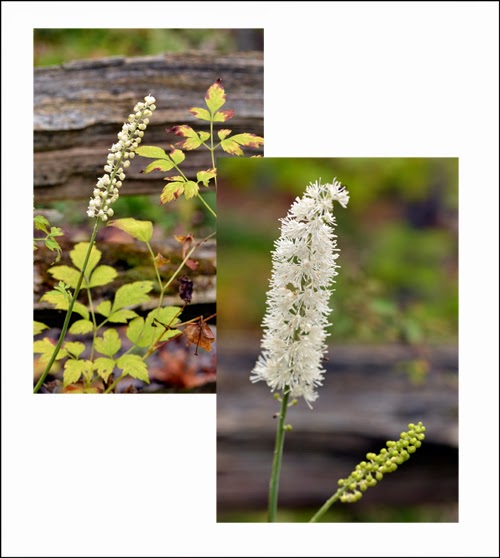 My second suggestion for the very late garden is a Bugbane. I am  embarrassed to admit that I've totally lost its label so have no idea what the nursery called it. I just went through a whole box of old labels - labels whose plants have died, duplicate labels, labels I simply didn't want to have to look at in the garden, in other words, labels sans plants of all kinds, hoping to find a clue to this one's name but with no luck.

I was surprised to see how many labels I have called $39.99.

Anyway, this 'Bugbane' is a form of Actaea simplex, and you won't have any trouble recognizing it at the nursery or in a catalogue. The foliage is yellow/green, the plant is fairly short at less than 3', and it blooms late. So late that you will be surprised to see it blooming at all. The frothy bottle brush flowers are held above the foliage and appear just when the glorious red leaves of the Maples are floating to the ground. As I recall, the plant itself sits quietly at the back of the low border all summer, just looking yellowish green and bushy, then in September you will notice spikes of what looked like pale green pearls held above the leaves. You may think they are seedpods at first, but no, they are buds. A week later, well into October, the plant will be furnished with a good number of white spikes. 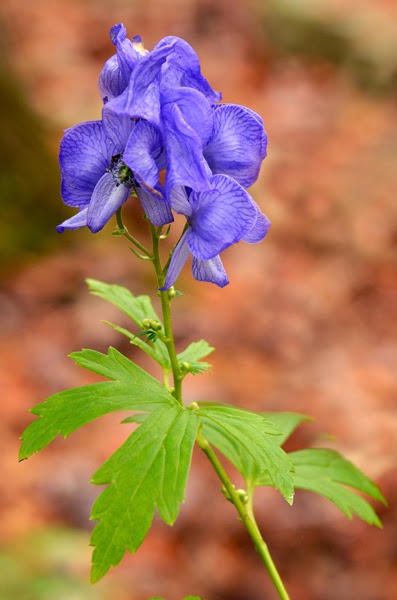 My third suggestion is Aconitum Fischeri. It is the only Aconite I know that isn't 'miffy'. It doesn't disappear for no reason.... it doesn't get smaller and smaller every year until you can't find it anymore... it doesn't forget to bloom in years with an August in them....

The fleshy or tuberous roots are easily enough divided, which is a good thing as this plant looks best in a substantial patch. It will take shade, but prefers some sun.

A. Fischeri gets to about 3' tall, and the flowers tend to be in clumps rather than spikes like those of other Aconites. The colour is a pure rich blue, warm, but not purple. The foliage is clean and medium green and looks good all summer.


My three fall bloomers look wonderful together, or associated with good foliage plants like grasses or ferns. All are adaptable and easy-going and make October and November much easier to get through.
Posted by Lis at 1:24 PM 2 comments:

There is a hush over the woods today - no wind, nothing moving, the birds still. Across the beaver pond a small mist hangs among the tops of the tall pines. The pond itself lies quietly in its hollow between the rocks, the reeds not moving, no ripples, and no ducks today. Kip, in the lead as always, stops and waits for me to catch up. He's staying close today.

We are waiting for the snow. 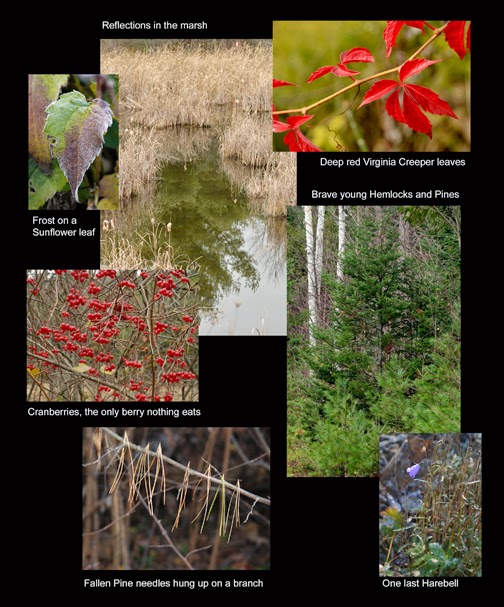