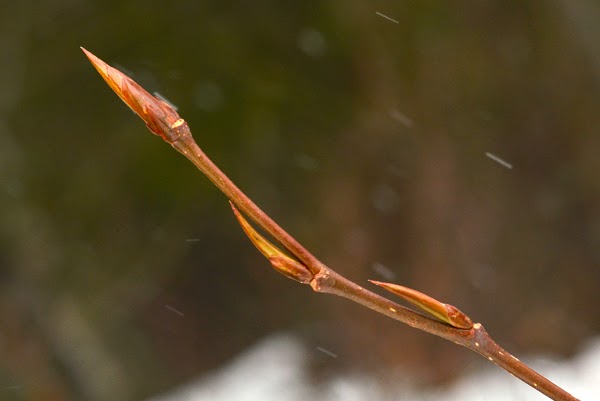 Of Sunday and Seeds and Spring and a Stump....

I'm having that spring time feeling, you know, where you don't know whether you want to dash out and do something wild and ambitious and energetic, or go have a nap....

It being Sunday today, with the sun shining warm for the first time in months, I figured I'd do a few chores and then go for a walk in the snow. For us self-employed people, days 'off' are never all that 'off'..... so I unloaded and re-loaded the kiln, trimmed a few syrup jugs and put handles on them, eyed the Aquilegia mugs with a critical eye and admitted that there had not been any overnight miracle, they were still duds, and by then it was lunch time.

After lunch, Kip and I ventured out. The snow was still hard enough under the trees to make snow-shoeing easy and he mostly stayed on the path as well. Like his owner, he's soft from a winter of being stuck inside.

As you can see, he wasn't entirely delighted, but game. 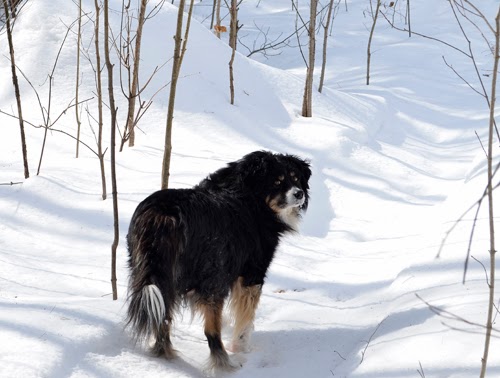 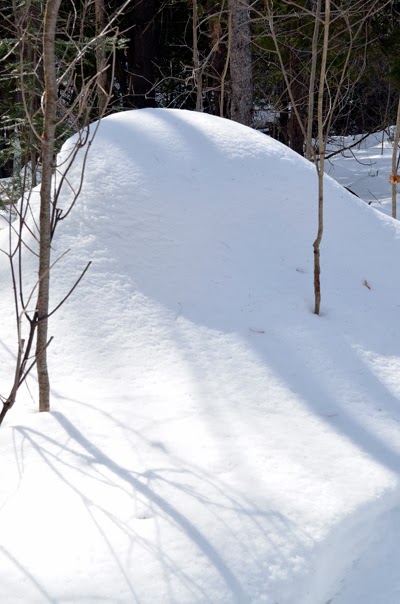 I took the path that leads to the stump I'm going to be following. Here it is. Our Stump. Hmmm. Not too interesting right at the moment.

I studied it for a while and found myself thinking it really ought to have a name. My inner imp immediately offered up 'Sir Stumpie'.... or 'Herr Stumpf', or, no, never mind, you don't need to know the others.

I wonder what life is like under its blanket of snow. Are the mosses growing? Are there insects stirring? Perhaps a small mouse, running along its tunnel around the back? I do know that it isn't dark under the snow, so it must be a strange world of light filtering down through icy crystals.

On the way home I plowed through the snow to a plant of Swamp Milkweed (Asclepias incarnata) which had some rather ragged seed pods still hanging on. To my delight, one of the pods was unopened and full of seeds. Will seeds that have been frozen like that still germinate? Only one way to find out: 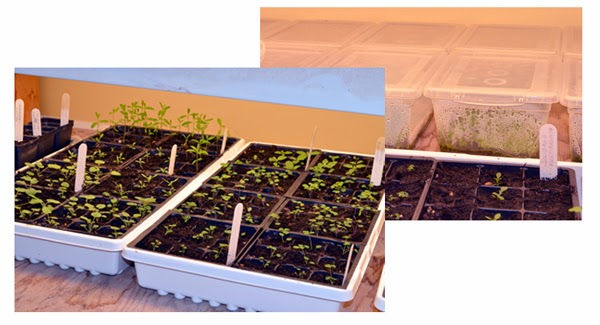 I planted them. What you see above is some seedlings already growing under the lights in the Studio. I had about 20 packages of old seeds in my stash and planted them a few weeks ago. Some were several years old, having been comprehensively forgotten in the rush of other work, but all but a few germinated. They are mostly rock garden plants (what the heck is Elmera racemosa??) but there were also seeds of a few natives. The tall ones you see at the back are Apocynum cannabinum, for example.

There were two packages of Jeffersonia diphylla, and they have not germinated. I've had seeds of that a few times now, and have never yet germinated any. Actually, one set did, but they turned out to be J. dubia. Nice enough, but not our native. If they don't do anything in the next week or two, I'm going to dig a hole in the snow and put them down there and see if that will wake them up. Twinleaf is a neat plant, and I would really like to have it in my garden. The flowers, like those of Bloodroot, last about 15 minutes, but the leaves are interesting. I know where there is a huge clump not far from here, but I have never seen any seedpods on it.

On the right in the upper picture you can see a few of the plastic boxes I am using to germinate some ferns. The green you see is the tiny fern gametophytes, in their zillions. I'll have to do some thinning.

Right after that nap.