Small Incidents in a Large Garden

Sometimes you just have to ignore a few things. Ignore the weeds. Ignore the plants that are in the wrong places. Ignore things chewed to the ground by the deer... just ignore everything except the beauty in whatever is in bloom.

A few days ago I equipped myself with a nice cup of hot coffee, freshly made, dialed my 'Ignoring Ability' up to 'High' and set off to wander around my garden for a bit. Nothing really amazing was in bloom, but there were rewards nonetheless. 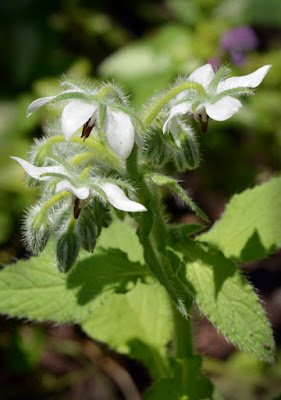 One of the first things I saw, unfortunately growing in my front steps but what the heck, we are ignoring that, right, was a white Borage. I've had this version of the usual blue Borage for quite a few years. It seeds itself under the Crabapple trees and can get quite huge - three feet tall is not unusual. The flowers are glistening white. But will it grow in my Herb Garden? Of course not. Never mind, this one in my front step is blooming beautifully and I can always step over it. 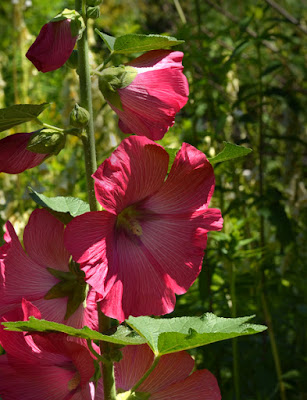 Not too many Hollyhocks left this year. I really like the very dark one (which they call 'black' but of course it isn't, it is really dark red) but its seedlings tend to be lighter shades of red. This one has held down the corner of the Herb Garden for quite a few years now. 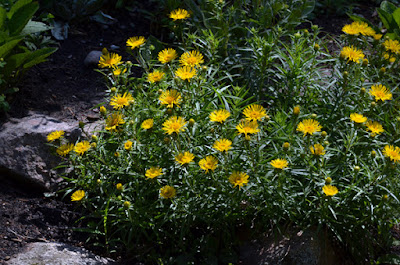 Moving down the driveway to the Rockery, I see that one of the many yellow daisies is in glory. This is, I think, Inula ensifolia.The foliage is very bristly but it is a great plant for the larger rock garden. It fluffs itself over the rocks very nicely and blooms for several weeks. 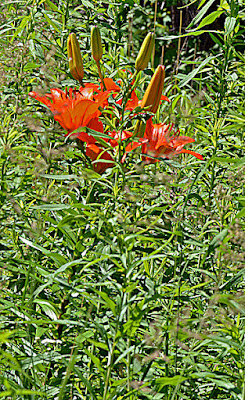 Looks like the deer left me one lily. The picture looks a bit impressionist - some day I'll learn not to take photos in full sun. Not today, though! 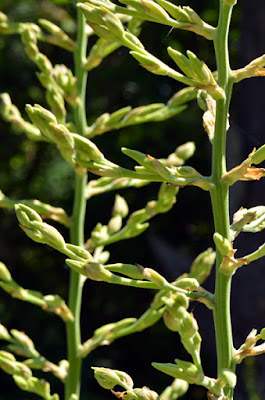 Actually, this photo kind of works. The Yuccas are getting ready to bloom and the flowering stalks made a nifty pattern against the dark trees behind them. 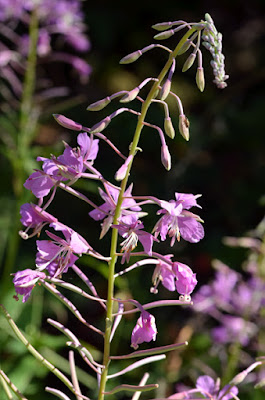 The Fireweeds are pretty well finished, but I was interested to see that most of the flowering stalks drooped over at the top. I've never seen this before, so it must be because of the dry summer we are having. We've had some rain in the last few weeks, but what with the very hot days and the low humidity I think the soil must be very dry. For sure the Marsh is very low this year. The beavers are having to drag trees a long way, maybe soon they will have to import water too.

Echinacea paradoxa is doing well. It must like dryness. I grew some of the seeds from this plant a few years ago and the variety in the seedlings is amazing! I thought they would all be yellow, but some are peach and one is quite orange. Of course all the seedlings are growing in the path... must mark the good ones and move them. 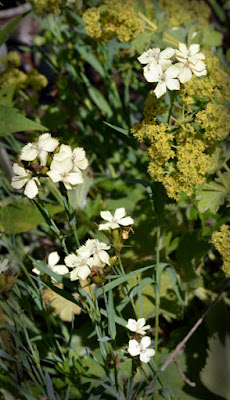 Did you know there is one yellow Pink? This is Dianthus knappii. Not a very bright yellow, but pretty anyway. It looks better than this picture shows, I took that in full sun too. It's about 18" tall and undemanding. 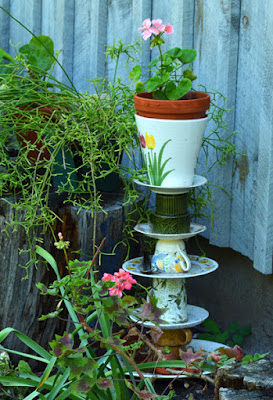 Up against the Studio wall I like the way the geraniums are filling in around my dish totem. It was made by a friend and she calls them 'totems'. Since I make tableware pottery, it has a lot of meaning for me. Plus I just like the way it looks. 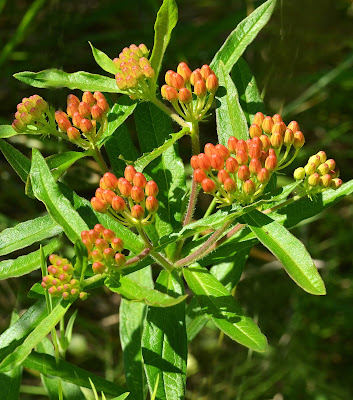 Orange Milkweed is about to bloom. I'm really happy to see more plants, it is finally spreading. I've got it in pure sand, very dry, full sun. Awful conditions, just what it likes. 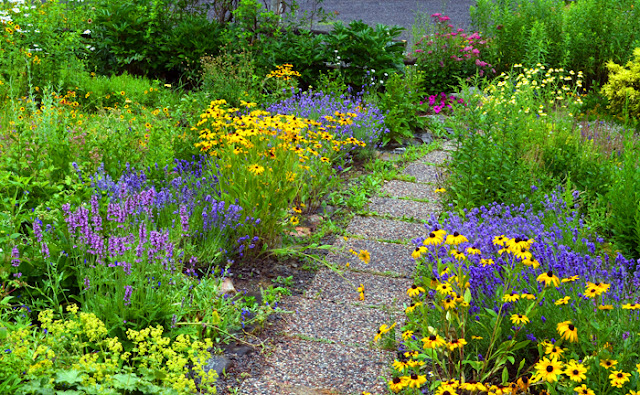 Coming back through the Herb Garden, I'm struck by the colour combinations. The Lavender, Stachys, Rudbeckias, Coreopsis, all are set off by the bright purple-pink Petunia you can just see at the top of the picture. The Spirea is the same shade as the Petunia but has almost finished blooming here. I don't much like Spirea bushes, but rescued this one because I liked the deep rose colour. Anyway, the Herb Garden path looks pretty good here, and we can't see those weeds moving in on the paving stones, can we?
Posted by Lis at 8:46 AM 1 comment:

As some of you may know, my dear husband, Robert has been ill for some time. In May of this year, his health became even more precarious.

I miss my companion of over 50 years more than I can say. Even though he was never himself involved in my garden, he was always ready to admire a new planting or listen to my enthusiasm about a newly discovered plant or critter. He didn't much like hikes, but he did enjoy exploring our property here. Somehow, this helps me feel that his spirit is still here.

It has been a difficult couple of months, but I plan to get back to writing and working in my garden and my pottery studio.

We have finally had some rain, the sun is shining, the roses are blooming... we will carry on.