A quiet note sounds in the distance. A light breeze, a hint of song... 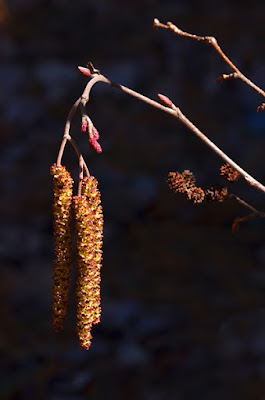 Along the edge of the marsh, the deep and dusky notes of catkins on the Alders. The catkins sway in the breeze below the much smaller red cones of the female flowers. Last years cones persist.


Buds are enlarging, ready to sing of leaves.


A thrilling run of deep notes of purple from Iris Reticulata sound. One of the first flowers to bloom and a sustained note  in the cool weather. 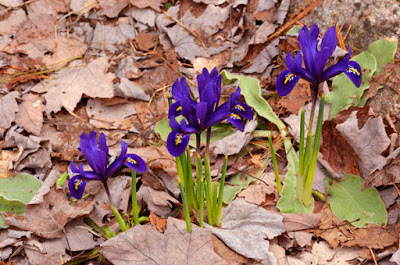 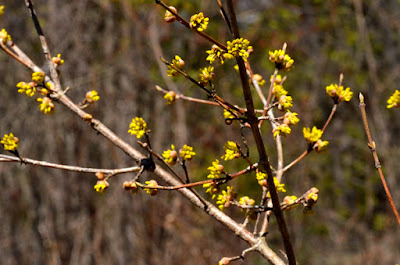 A throb of yellow becomes just audible as the Cornus Mas shrub covers itself in its curious small flowers. 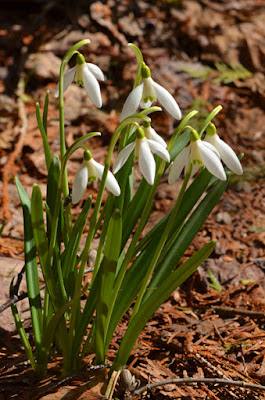 Snowdrops appear above the leaves on the forest floor, introducing the opening notes of the garden's theme.

Light high notes, rising briefly, so briefly, above the deeper concerns in the background.


The Iris hands off to the bright blue-purple blooms of Anemone Blanda. 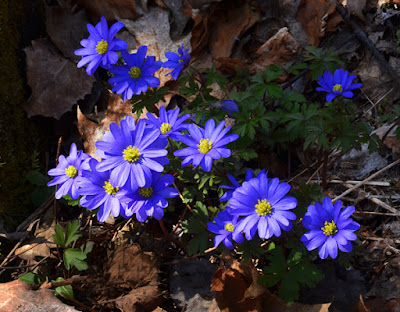 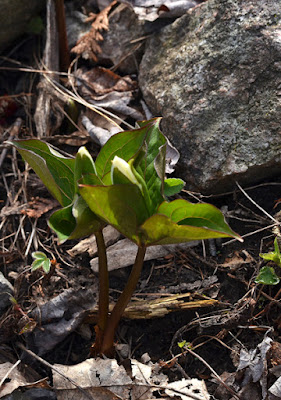 Bloodroot doubles them along the fence row. 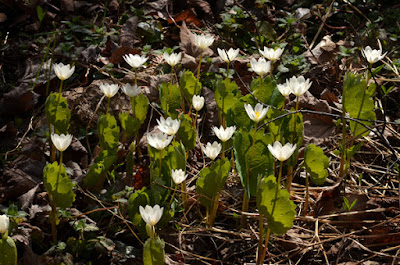 A quiet counterpoint of fiddleheads begins beneath the theme. 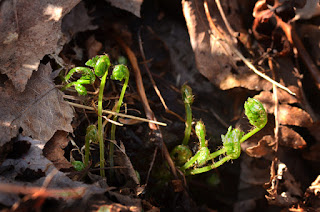 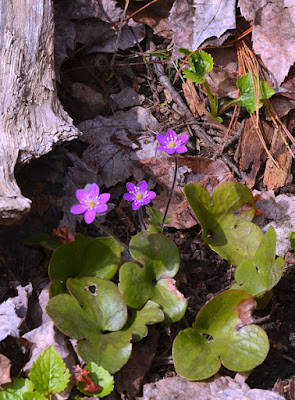 Hepaticas, delicate and ephemeral, join in.

Trout Lilies nod over their contribution. 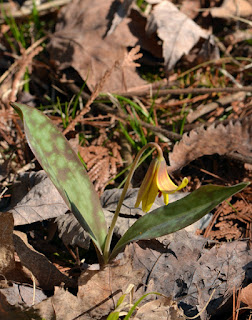 In a garden, deep in the woods, Spring begins.

Every Spring I go through the same thing: a period when I both want to take a nice long nap, and want to go dashing off in some direction to do something energetic.

Best thing to do is go for a walk, but there is still a lot of snow, very icy snow, in the woods and around my garden. Out in the open, the snow is basically gone, but under the trees winter hangs on for at least a week longer. I was able to walk everywhere in front of my house, but was stopped by a 3' high pile of ice crystals at the back. Maybe that was just as well, as not all the news was good. 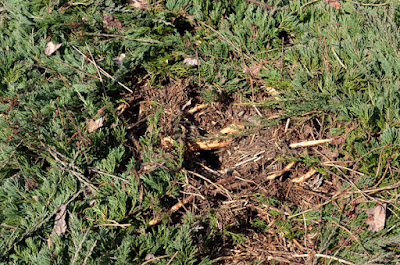 I saw that the mice have really chewed on my prostrate junipers. There is a whole swath of them along the front of the house and they do a great job of being a very low foundation planting. I did have to evict a mouse from the house earlier this year - she had moved into my kitchen dresser and started a nice nest in my favourite napkins - and, not knowing what else to do, I had tossed her outside. (It was on one of the warmer days.) Maybe this is her revenge.

And garbage, garbage, garbage. Where does it come from? I know  Snowblower Man had an unfortunate encounter with a bag of garbage I must have left out (the results were not pretty), but I don't smoke so where do cigarette butts and other stuff like that come from? Is there a Garbage Fairy? 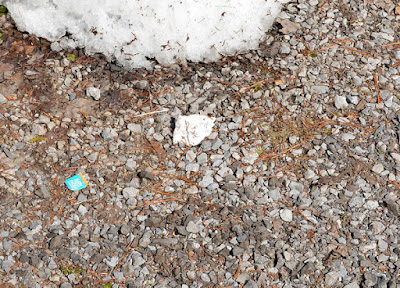 It always surprises me how flat everything gets under the snow. Logically I expect it, but when I see it, it is still a shock. Sort of like when someone you know gets his hair cut. You know what it will look like (usually) but when you see it you still feel jarred. The leaves blown onto the garden are packed flat, stems of perennials I didn't cut down are flat, even the garbage I was talking about is flat. 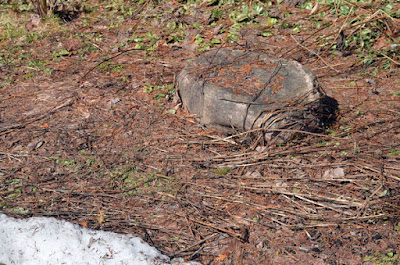 The small pines in the woods are comically bent over, having been under the snow for months. They look dire, but I know they'll soon straighten up.

Speaking of trees, I looked up and didn't see that the buds on the Maples were much enlarged yet. Only the one Red Maple near the house showed fat buds, and these Lilac bushes. 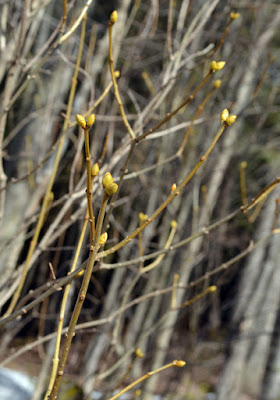 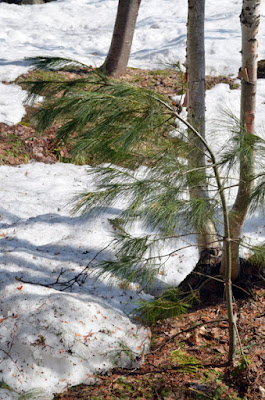 
Daffodils and Peonies are showing their noses above ground. 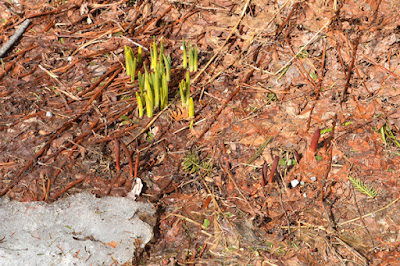 Down near the marshy bit, Ranunculus ficaria, a thug of the first degree, is growing and ready to burst into bloom. The shiny bright yellow flowers are attractive, but the little bulblets help it to spread like the dickens. There is no such thing as one Lesser Celandine! 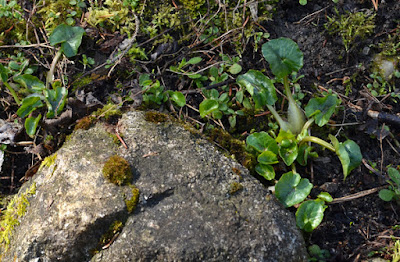 Snowdrops! The Snowdrops are out! 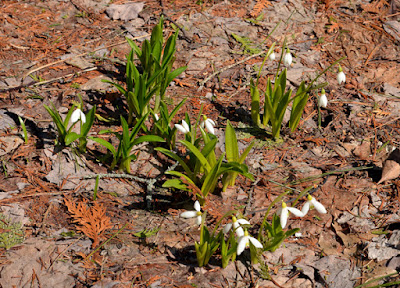 These are Nivalis morrowii and they are in a spot where the snow melts early. I noticed that the little knob on the top of the flowers, where the stem attaches, is green in most plants, but yellow in the one in the foreground. I'll have to keep an eye on that and see if it stays that way.

I also see this blog needs a new Spring header. Hmmm.... maybe after I have a short nap.
Posted by Lis at 6:55 PM 2 comments: