In Praise of Sloth

Occasionally, only occasionally, sloth pays off. Usually, by this time in April, I have the leaves all or mostly raked off the various garden beds. This year, however, in spite of the warm days we've been having, I have hardly begun to rake. I've cleared the worst of the leaves (and the gravel thrown up by the snowblower doing the driveway) off the Rockery, but everywhere else they still lie thick and heavy. And tonight and tomorrow night, we are supposed to be getting several degrees of frost,  with the possible added excitement of snow flurries. So for once my laziness is paying off!

Not that I'm really being lazy. A gardener cannot afford to be lazy. It just seems that Spring, real Spring, is so slow this year that we might as well still be in March, and one doesn't rake leaves in March.

Meanwhile, I took a wander around and found a few quite nice things in bloom in spite of the weather. 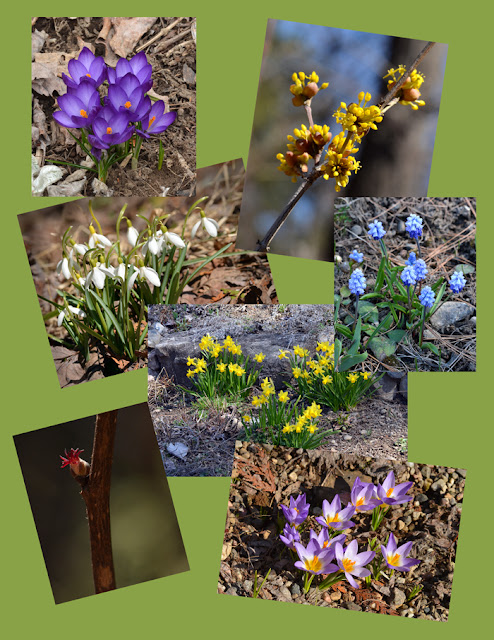 The dark purple Crocus at the top is Ruby Giant. Not particularly ruby-coloured, and not all that giant, but a sparkling beauty none the less. I have it in among silver-leaved Lamb's-ears, but Ruby Giant deserves better. Lamb's-ears are very shabby early in the season. I read somewhere that the squirrels don't dig up Ruby Giant, and it might be true because it is the only one that is spreading.

Beside the Crocus are a few of the flower clusters of Cornus mas. This, with me, is a rangy shrub, about 8' high so far, which blooms heavily and for a longish period, usually over a week. The rest of the season I don't even see it, it disappears into the general tree and shrub background.

Snowdrops you know. They haven't been that good this year, perhaps I need to divide them. Or perhaps the deep snow pack discouraged them.

The Muscari is the variety called Valerie Finnis. I love it's soft blue with the darker blue tips. Its flowering stalks are shorter than the other Muscari, but it is seeding itself into a big patch so you don't really notice that. It can seed itself all it likes for me.

The Daff is Tete-a-tete. The name is probably because most, if not all, stems carry two of the small but perfect Daffodil flowers. It too seeds itself around.

That weird red thing, which is really very tiny, only about half an inch across, is the female flower of Beaked Hazelnut. Tiny red stars... sprinkled all over a loose shrub about 6' high, which lead to pairs of hazelnuts encased in bright green 'sleeves' which lead to squirrel joy because they eat every one. The male flowers are tiny braided catkins. The stems of the Hazelnut seem to only live for one or two years, then new stems take over. You have to rake the dead ones out every year, not hard to do, but odd for a shrub.

The last Crocus is Crocus seiberi, the Three-colour Crocus. The squirrels left me a few this year. These flower very early while everything around them is still grey and winter-dreary, but so brightly! A rock garden Crocus, it does need good drainage.

So if it really does snow tonight, I'm going to be smug about not having the leaves raked off my garden, and I'm going to look at the picture of the spring bulbs and not the snow!
Posted by Lis at 6:28 PM No comments:

Yesterday, late in the afternoon when the light was yellowing as the sun sank behind the pines, I finally, finally, saw a Crocus blooming in the garden.

I parked my tea mug on the path and hurried to get my camera. 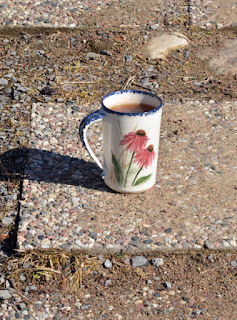 And then I took 47 pictures of the two tiny crocuses blooming under the crabapple tree. This is the one called Cream Beauty, and seems to be one the chipmunks don't eat. It's not spectacular, it is charming. 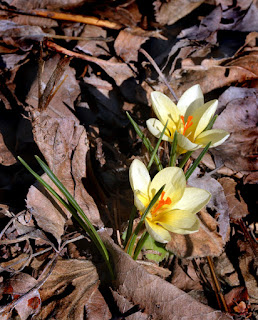