They say April is the cruelest month, but for me, February is. The weather is dreary, the fun of fresh show has worn off (very worn off), the sun don't shine... the month just seems long and dull.

So I do oddball things just to make the month go by faster. Like making weird arrangements to decorate the house.

Now, those who know me will point out that I have no flower arranging ability to speak of, and I'll be the first to agree. Years ago I was at a lecture by an ace arranger, and he ended his talk by describing what he called 'the Dutch Bunch'. 'The Dutch ladies', he said, 'just go out into their gardens and look around. Oh, they say, here's a lovely blue flower, and they cut it and jam it into their left hands. Then they find a yellow thing and cut it and jam it in their left hands. A red rose, a blue Delphinium, a white Daisy, all get jammed into the left hand. When their hand is full, they go in, stick the whole thing in a large jar, and voila, the Dutch Bunch.' Best part of the lecture, for me.

So I grabbed my trusty secateurs (yes, I was able to find them, unlike the trowel which I really need as I'm planning to transplant a bunch of baby ferns, anybody seen it lately?) and ventured forth. It was kind of gloomy out, a bit of drizzle happening, the snow deep all around, but not cold. Just a wander down the driveway and I found all kinds of nice dried weeds. 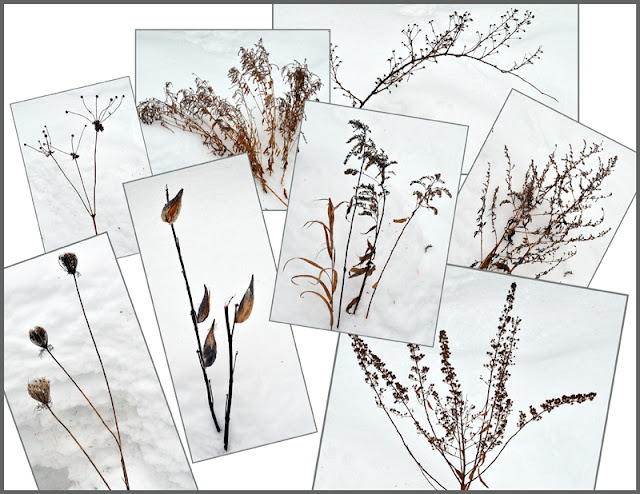 A Spirea bush donated a stiff stalk, much branched, the Motherwort plants that have taken over a patch near the road were a lovely deep brown, there were Queen's Anne's Lace 'nests' a-plenty, Milkweed pods, of course, Ggrasses, Goldenrods, Asters, even a rather goofy Japanese Anemone stalk.

I gathered them up and jammed them into my left hand.

Stuck the whole bunch in a tall vase (a wider one would have been better), and placed it artistically on my hall table. I did cheat a little and added some bulrushes from last summer, but that was the extent of it. 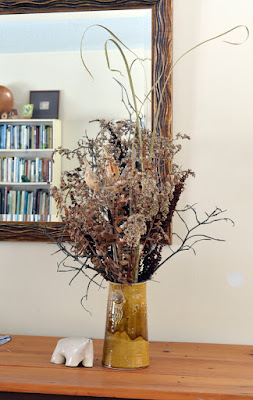 BTW, if you want to have bulrushes for arrangements in the Fall or Winter, try to get the small ones. There are two species and the most obvious difference is that one has much smaller 'wands' than the other. It grows all along our roads, just keep an eye out and you'll see them. Pick them while they are still green and let them dry upright in a cool spot. They won't burst and spew fluff all over the room, and they'll look good in arrangements all winter.

You can of course, also go out and buy a flower or two. Here's another of my 'arrangements' using some purchased Chrysanthemums and a piece of Balsam Fir branch blown down by the wind. 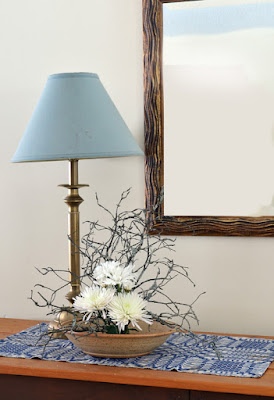 I apologize to those who really do know how to arrange flowers, particularly those who do Ikebana. I admire it, but it isn't in my skill set.

Another fun way to use wild stuff to decorate your burrow in February is to bring back one small twig or branch or stem every time you go for a walk, and stick them individually in a collection of small vases.

I just happen to have a fine new narrow shelf rail in my dining room, and of course, being a potter, I have plenty of small vases to choose from.

And no arranging required! 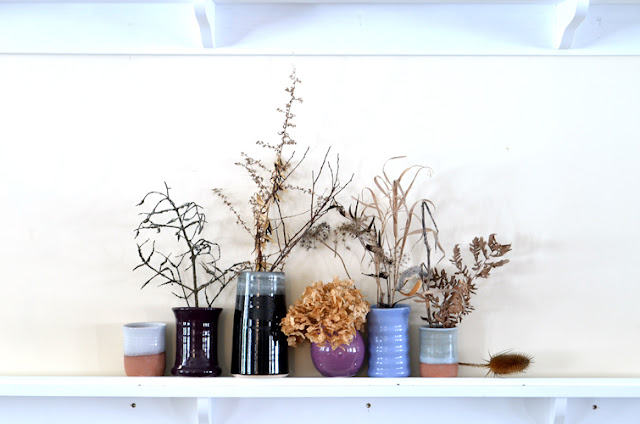