So far, the signs of Spring are few and far between.

The buds on the Maples, one of the key things I look for to see if Spring is around the corner, are only just barely starting to swell.

The stems of the Red-stemmed Dogwoods are not very red yet, although the stems of the yellow-stemmed one do look brighter than they did.They got buried in a huge drift of snow by Snow Blower Man so it may just be relief at having their heads out again.

And speaking of snow, there's still plenty of it in the woods. In the morning it is frozen hard and Kip can run all over on top of it, but by afternoon it is softening up and he keeps falling through. It's funny to watch him, but the wild turkeys are even funnier - every time they go through the crust they give a little jump to get back on top, then they lift their feet high as though they think that will help. Of course it doesn't and down they go again. There are three males here that seem to be hanging around the bird feeders. If they think that they've discovered something the girl turkeys will admire them for I'm afraid they are going to be disappointed.

But...... the driveway is muddy, some of the rocks are showing through in the Rock Garden, there are hundreds of Red-winged Blackbirds in the Marsh (making a heck of a racket!), and I found some snowdrops! 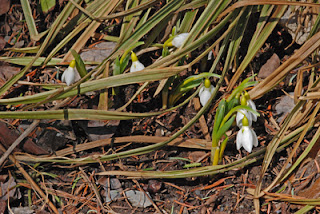 Shivering Snowdrops, but Snowdrops none the less.

Obviously, we are having a late Spring. And just as obviously, when it does finally come, it will come in a rush. We'll go from snow lurking under the trees to weeds a foot high in about 15 minutes. Tulips, Daffodils, Crocuses and all their cousins will  bloom for 5 of those minutes. I'll be able to park my lawn chair between the Hillside Border and the Rock Garden, and enjoy an entire flowering season during a (short) coffee break.
Posted by Lis at 6:24 PM No comments:

A google search on these names didn't turn up any sources of these, no surprise. So I checked my favourite seed company, Gardens North, and no luck there either. The beauty of getting seeds from Gardens North, for me, is that many of the seeds Kristl Walek sells are collected in Ontario, so if she has them, I figure the plants will have a more-or-less local genome. Not that I am that fussy about that - I'm not planting them as a restoration project, just in my personal garden.

What I did turn up: the North American Native Plant Society, which is the somewhat-revived former Canadian Wildflower Society, has a seed exchange. I signed up as a member right away! Some mixed feelings about it, I must tell you. I was one of the first members of the CWS, and took the group very seriously. It was focused on Toronto, of course, but I had hopes that they would start chapters in other areas. They had a terrific magazine, Wildflower, and at one point they seemed to be growing steadily. Unfortunately, they made some bad decisions (yes, I squawked loudly), such as devoting too much of the magazine to plants from areas we Canadian types just weren't interested in, spending too much of their resources on the magazine to the detriment of any other activity, and, worst of all, renaming themselves the North American Native Plant Society. There would have been a roar of outrage, if they'd had enough members left by that point. I didn't renew my membership either and I guess they pulled back to only a small, Toronto-based club.Now they seem to showing new life again.

Their website (new) also mentions that they are having a plant sale May 7th. Wish I could go! But it's the opening day of my local Farmers' Market, and the day of a local crafts sale called Handmade Harvest and I'll be selling my pottery at both. How will I be at two events simultaneously? No, I haven't managed to clone myself - my long-suffering spouse will be at our booth at the Market. He's an excellent salesman - his Irish ancestry is a real asset sometimes!

I'll be looking for these violets this summer.They are listed as occurring in few locations where one can go hiking, within driving distance, and I'll focus on looking for them. Maybe, just maybe, I'll find them. Then I'll go back and hope for seeds....

And send some to the NANPS seed exchange. Maybe.
Posted by Lis at 8:43 AM No comments:

Or should that be 'Jacks-in-the-pulpit'? No, that would imply many Jacks in one pulpit, and it could get crowded.

I'm thinking of these rather oddball plants now because somebody asked a question about them the other night. I was giving my fern talk to a local garden club, and one of the pictures I showed included a Jack. She basically asked if she could grow them in the City and I said, 'why not?'. Her question reminded me of my husband's late great uncle, Alfred (whose brother was named, yep, Wilfred). We were once invited to dinner at his place, and he invited me to come out back to see his garden.

It was a pretty typical inner city yard. About 35' by 30', with a board fence across the back, a cedar hedge on one side, and the garage wall on the other. The garage wall was completely covered with a climbing rose, which, this particular day, was in bloom. And what bloom! I looked in awe at a  30' long wall of gorgeous, deep red, velvety roses, every one of them facing us as we stood there looking up at them. Alf told me he planted it in 1920, just after he got home from The War.

'It's not hardy here, of course,' he said. 'So every fall I loosen the roots around the top of the crown, dig a trench from there to the end of the wall, and carefully bend the rose over to lie in the trench.'

In the spring he would dig it up, stand it straight again, and re-tie all the canes to their lattice support. The tie-ing in alone must have have taken days!

The rest of his garden was one bed, I would guess about 4' deep, running the length of the fence. And it was filled with Jack-in-the-pulpits. Hundreds of them. The ones at the back were the tallest, some of them over 3' tall, and the ones at the front were the shortest, from about 6" up to 12" or so. There were many flowers under the leaves, and they varied quite a bit in colouring. Some were all green, with slighter darker stripes, some were white with purplish stripes, and some even had hints of pink. Alf explained that the Jack-in-the-pulpit, Arisaema triphyllum, grows from a tuber very much like a tuberous begonia does. The tuber keeps getting bigger, and you can, if you wish, divide it to make more plants. He didn't, he said. He liked to see big tubers.

'Those tubers at the back, now,' he said, 'they are as big as your two hands together.' He went on to say that the flowers would give way later in the summer to stalks carrying large shiny red berries. Each berry could have up to 8 seeds inside. He cut them off, he said, because he didn't have room for more plants, and even so, he would always miss a few and they would come up under the bigger plants. If he liked the flower, he would move it to the front to grow on, and then if he really liked it, he would make room for it further back.

Yes, you can grow them in the City, Barbara! Just give them decent soil, not too dry, not too soggy, a bit of shade, and stand back. In about 40 years, you'll have tubers the size of your two hands. 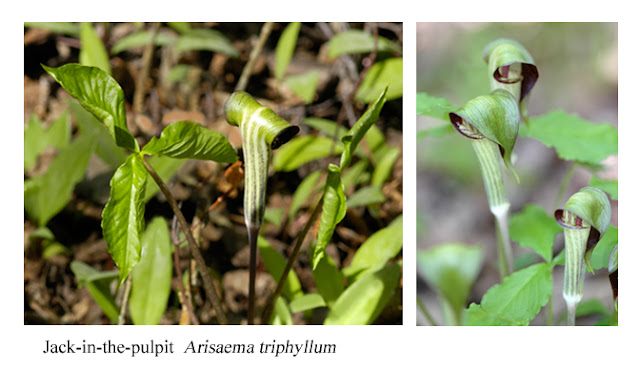 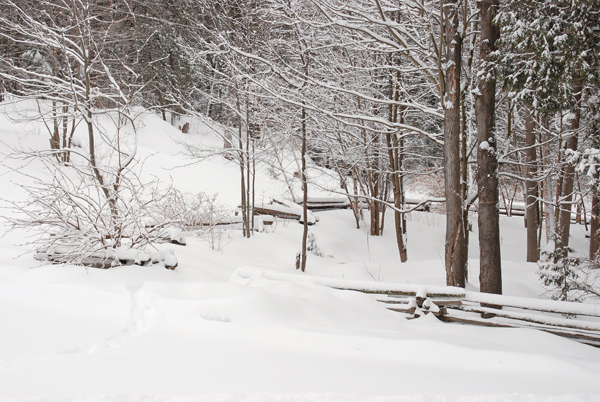 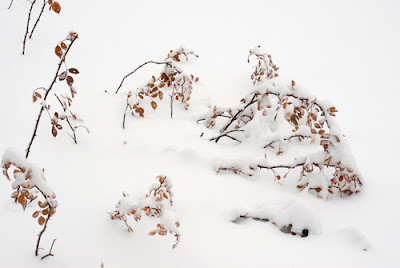