One more person says to me 'Oh, no good growing Phlox, they always run out and turn purple' and there might be an explosion!

Someone said that to me again yesterday, as we stood looking at my Hillside which still has quite a few phlox showing a few last flowers. There were white ones, pale pink ones, bluish-mauve ones and a dark almost red pink. Earlier, there had been the almost purple 'Nikki' and a variegated-leaf one with medium pink flowers as well. The Phlox did very well this year - they seemed to like the heat! If she had said only the 'run out' bit, I would have tried to explain about Phlox being hybrids and their seeds not necessarily giving plants like the parent, but once she threw in the other bit about them coming back 'purple' I gave it up as a bad case. One thinking error I can handle, but two are beyond me.

The original Phlox paniculata, what you might call your Natural Phlox, was magenta. Perhaps a washy magenta, but magenta. Not purple! Purple is darker, bluer, much closer to indigo than to red. Campanulas are sometimes purple, as are some grapes and some plums. The hybridizers have done their magic tricks and given us Phlox in a range of colours, all of them charming, but none of them really purple.

Just for fun, here's a picture of a late Harebell, Campanula rotundifolia, in the rain. All pictures lately have been 'in the rain' because I'm convinced it hasn't stopped raining since middle August. Ok, and a picture of Geranium sanguineum just to have a true magenta to look at. 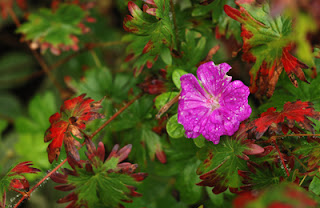 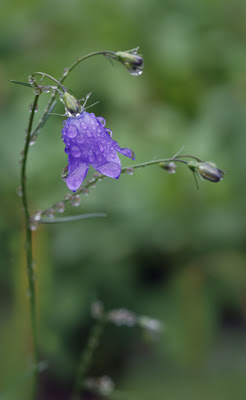