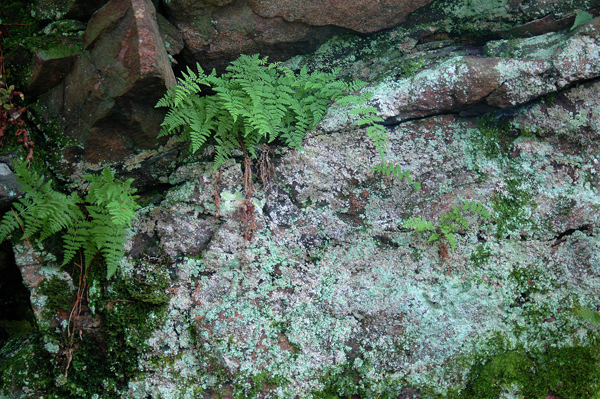 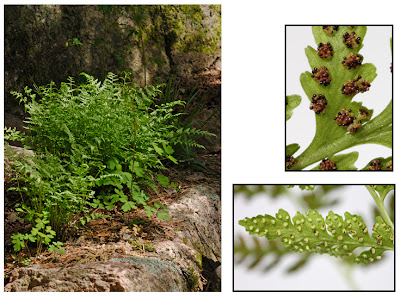 And it's a sure sign Spring is here.
Posted by Lis at 8:31 AM No comments:

Trilliums on a Snowy Day

Snow day today! It's snowing steadily and we are supposed to be getting a fair-sized accumulation. So far there is about 10cm down, so I am going to considering my path to the Studio (all 30 feet of it) totally impassible, and have a Snow Day!

(For those who caught it, yes, I am fully bilingual when it comes to measuring systems. I mix feet and centimeters to suit myself. Very Canadian.)

I have some Trillium seeds from the Trillium-l seed exchange ready to put into pots. The best instructions for germinating Trillium seeds are to give them 2-3 months of warm, that is, damp and warm, conditions followed by 2-3 months of cold ditto. As soon as they arrived, I put the seeds along with a bit of a lightly dampened mix of peat and perlite into little baggies, and put the baggies in an airtight container on my desk. Today I'll move the seeds into pots of the same mix with a bit of soil added, cover them, and put them on the floor at the back of my plant shed, covered with a thick blanket of pink insulation. They should stay cold without freezing like that. Then, when the snow starts to melt, I'll move them outside to warm up naturally as Spring arrives.  If all goes well they should form tiny rhizomes with a single root. Only next Spring will they put up a green leaf. And this first leaf won't look like a Trillium leaf although once you know what they look like you can recognize them. They look like little green flags! Look at all of them at the base of these clumps of T. grandiflorums: 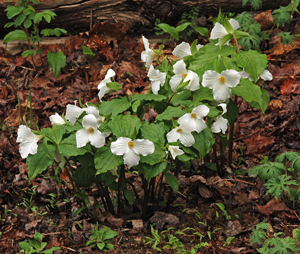 (No points for spotting the Dandilion.)

The year after that they will put up 3-parted 'real' Trillium leaves and in another year to two they should bloom.

Trillium grandiflorum is easy to grow in Ontario. They aren't very fussy about soil, but they do need enough sunlight and decent drainage. They won't 'do' in deep shade or a soggy spot. Other than that, just remember that they are Spring Ephemerals, which means they will be up early, will bloom early, and will go dormant in the summer. I had a fellow a couple of summers ago, came with his wife to buy some of my pottery, who was determined that he wanted to have a White Trillium in his tiny garden behind his row house. Always the helpful beaver, I sent him home with a nice three-stem potful. The next Spring they were back. I asked him how the Trilliums worked out.

I was kind of surprised, and asked him when did they die.

"August. First they got shabby-looking, and then they died."

I reminded him that they go dormant, and asked him if they had come back this Spring.

"No. I planted some geraniums there instead, they're good and give colour all summer long".

I was able to restrain myself. 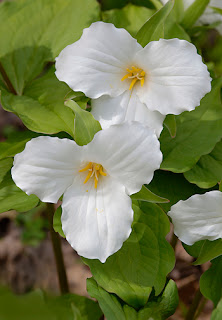 Toronto Gardens (link on the sidebar) has a thought-provoking blog about ethical questions relating to native plants. One that they touch on but don't go into detail about, is the often dubious origin of native plants being sold at nurseries. Since many of the more interesting natives are slow and/or tricky to propagate, they are dug from the wild, potted up, held for a few weeks, and sold as 'nursery propagated'. In my opinion, this is bad and wrong, on a number of counts. Where I lived before there were a lot of Wood Lily, Lilium philadelphicum, around. One day they were all gone, and there were holes where they had been. Somebody dug them, and there were far too many for any garden so we know what happened.


I have a hunch the problem isn't as wide-spread in Canada as it is South of the border, but we still need to be careful when we buy plants.

Here's a picture of a nicely round-petalled form I am encouraging in my garden. This is one of the best forms I've seen and it came up in my Sampler Garden. I moved it to a better spot and I'm hoping it will become a large clump. When it does, I'll divide it and eventually build up a bit of a stock of them. It's fairly large, too, and will have real presence in the garden. You saw it here first!
Posted by Lis at 8:23 AM No comments: