Went for a walk in the snow today, and there was a lot of it! I read in the paper that we already have more than half what we had last winter, and I'm sure we've had more than we had all the winter before that. It snuck up on me a bit this year. I've been so bogged down with pottery orders..... things breaking down..... chores..... I just about turned into a 'bah, humbug' person. Luckily I did recognize that some of it was just my own small Cloud of Gloom and I decided to take a few days off between Christmas and New Year's for an attitude tune-up. The last Christmas pottery order went home with a happy customer on the 23rd., the Christmas turkey was very fine, and several kitchen appliances do in fact still work.

The rest can wait while I enjoy the snow! 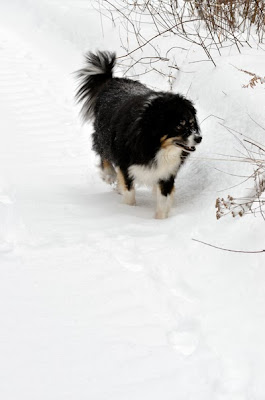 Kip loves the snow, but he has to stay on the driveway.

The snow is too deep for him to get through. He plows his way in, but then he can't see anything, or sniff anything, and comes to a frustrated halt. Then he sort of  backs out, shakes his snowy head, and trots off down the driveway again.

He's a funny one, loves snow but hates rain. When I open the door for him in the morning he checks the sky and if it's raining he won't go out. My cat, on the other hand, has been known to sit in the middle of the yard in a downpour. More than once.

All the things in the garden still sticking up above the snow have comical hats on, like these sedum stalks in the Rock Garden. 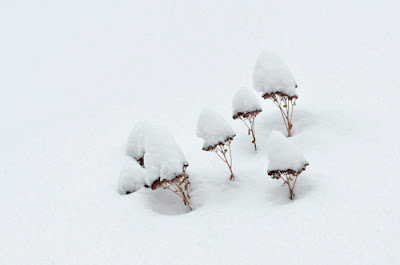 The seed heads of the tall teasels are at their sculptural best; this one is as graceful as a dancer. 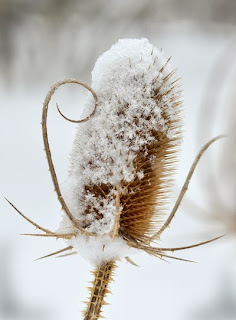 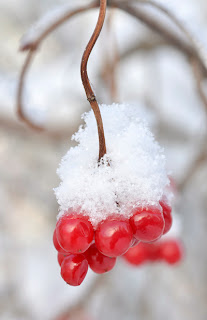 Near the end of the driveway there's a large cranberry bush. It was only a spindly stem a few years ago, but this year covers a large area and is heavy with bright red berries. They're too sour and what the Dutch call 'vrang', a word that doesn't really translate, but think pucker-power, to be of much joy for eating. Even the birds don't eat them until they are really, really hungry.

Tomorrow I'm going to get my snowshoes out.
Posted by Lis at 5:59 PM 2 comments: