A Happy Day Of Weeding

Today I had that most wonderful of luxuries: a whole day to spend in the garden! I had some new Basil, Dill and Parsley plants to plant, so I decided to work in the Herb Garden. We had a bit of rain yesterday and the day before, so weeding conditions were ideal. The mosquitoes thought so too, but I covered up and foiled their evil designs, at least mostly. Once it warmed up they went away anyway.

First order of business was pulling out masses and masses of self-seeded Heart-leaved Asters. Who knew they could spread so quickly! I'd left one clump last summer and apparently it had a Brilliant Career. The clump was right beside my path so you'd think I'd have heard the chortling but I didn't. Anyway, there were two wheelbarrow loads of Aster seedlings and there are still some under the yellow shrub rose. Speaking of Roses, they didn't come through the winter at all well. Of my 23 David Austin roses, maybe only 3 or 4 are showing signs of life. I have never covered them, but this winter  the snow was rather erratic, snow, then a thaw, then ice, then snow, then ice...  fingers crossed some of them recover. I was wondering earlier if I even wanted roses, but my disappointment when I saw how badly they were killed back tells me I do.

And I was sort of counting on the roses to get me through a Studio and Garden Tour next weekend. June 2-3 is not a peak period in my garden but usually the roses and the lavender are in bloom and most people then don't really notice how much else isn't, but not this year.

After all those Aster seedlings I had to have a little break to admire the Iris lacustris in the Rockery. 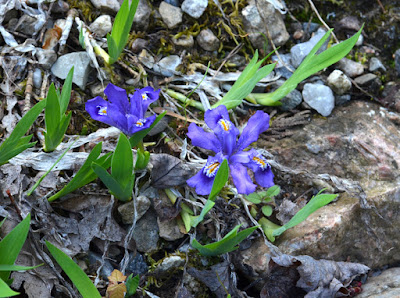 Back to weeding. Creeping Thyme has taken over far too much of the middle of the Herb Garden. It is very difficult to get out, especially with all the rocks that make up the paths. I used the garden fork, much elbow grease and some bad words and got a lot of it out. Not all, but I can attack the rest next time.

After that I needed to cool off so went and checked out the Creeping Phlox. Phloxes? They do seed around a bit but new plants aren't hard to pull out. Had to remove quite a big patch last year, though. A rather blue-ish mauve one had set up housekeeping right around a large clump of White Trilliums. It was fine until the Trilliums turned their usual magenta pink and then it was totally awful. This year the mauve phlox  is well away from the Trilliums. 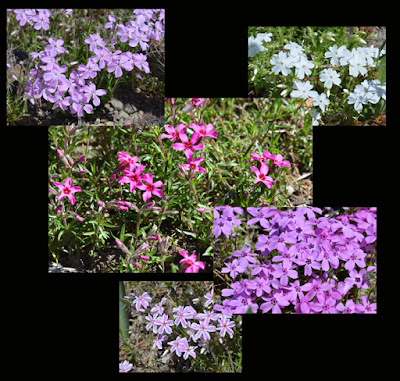 Near the remaining mauve-ish Phlox some Prairie Crocus have seeded themselves and I was surprised to see their deep reddish colour. 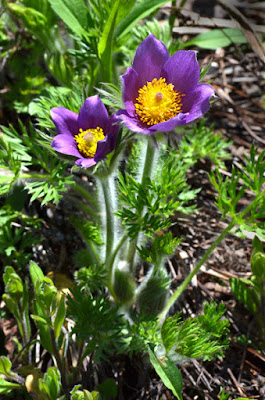 They don't clash with the Phlox, by the way. And I love those soft furry stems.

Back to work, cool drink in hand. The bugs are gone, but now it's hot. Dug over the small bed where I like to put the Basil and planted it. Then, for some reason, I put the Parsley between a large Lemon Balm and a substantial grey-leaved Yarrow. The dark green curly Parsley looks wonderful there! Where to put the Dill seedlings was harder. Several changes of mind later I put them beside the Evening Primroses (large patch as they attract cool moths) and in front of the poor red Clematis which is forever getting stepped on because it is too close to the telephone junction box. One day, should the Clematis ever seem robust enough to survive the experience, I'll move it.

After that spurt of energy I had to go check out the white Violets growing in the wet spot in the rockery. Still not sure if this is Viola Blanda or V. Macloskeyi. The former is supposed to have reddish stems and these don't. But they do have the twisted upper petals and the deep sinuses on the leaves. Whichever they are, they love their spot. It is a hole or dip in the rock and usually stays pretty wet all summer. 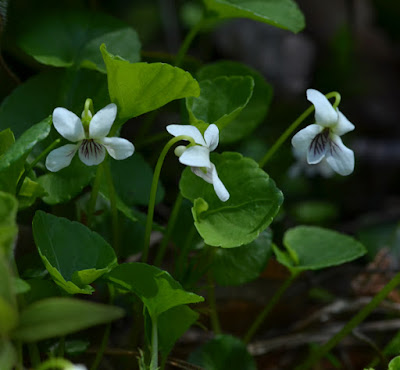 Nearby is a clump or cluster of Mitella diphylla, Two-leaved Mitella. The flowers are tiny, very delicate small fringed bells. The plant goes completely dormant early on. 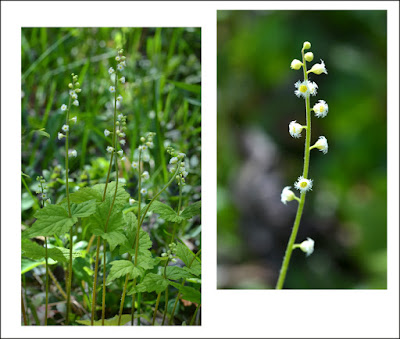 Bluets were very pretty too, perky and sunny-faced if not exactly blue: 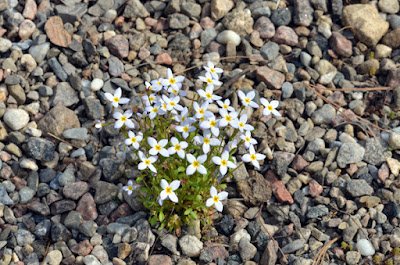 I guess the shadows on the flowers are blue.

The last thing to do in the Herb Garden was to find a nice pot and pot up the new baby Rosemary plant. Last year's plant didn't make it through the winter for the simple reason that I completely forgot to bring it in... and it was getting to be a nice size, too. Some plants need alarms to remind the gardener to bring it in in time.

After all that, time to go in for a glass of wine and supper! A happy day! 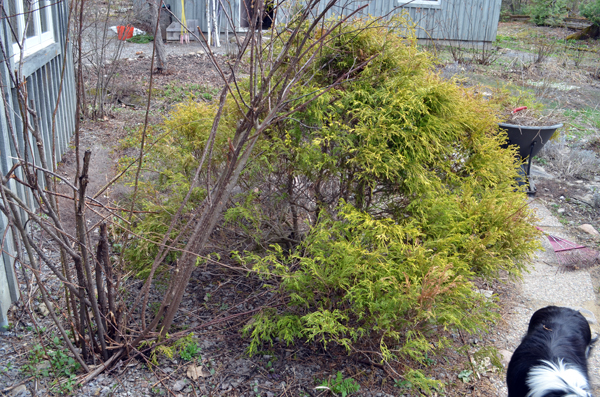 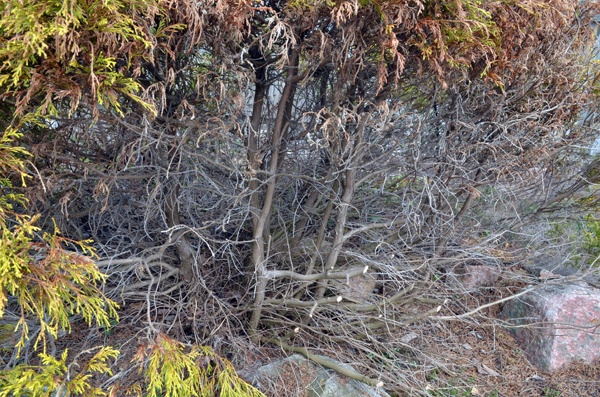 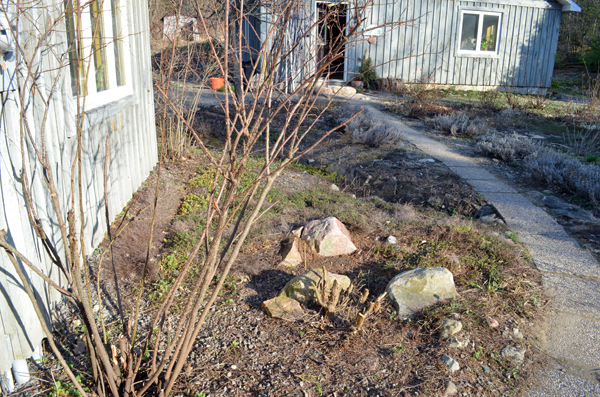 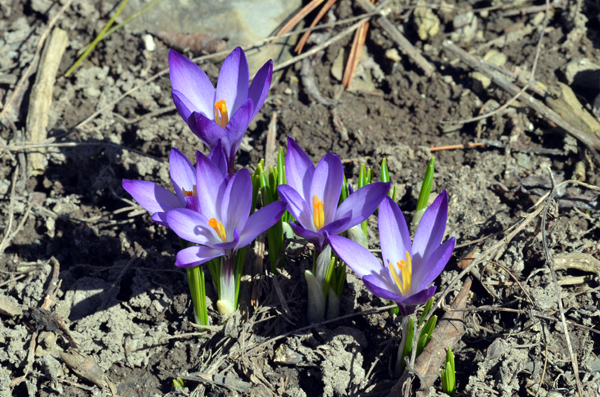