One of the pleasures of a garden is the morning walk-about. It's best done as an hour stolen from the morning before starting work, with a mug of good coffee and a faithful following hound. If the walk-about were an event in itself, you would have to think about the jobs you see that need doing, or the problems you note that need to be solved, but since the hour is being borrowed from the work day, you aren't on duty and can't be expected to think about those things. 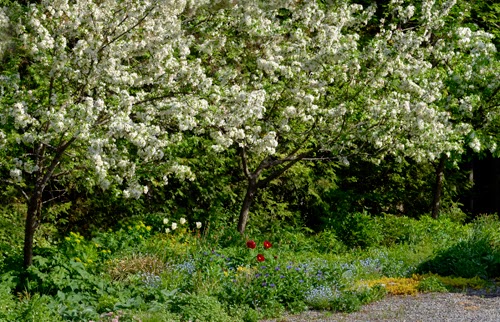 Let's start beside the house, where the crabapple trees are having their 15 minutes of glory. The red peony under the middle tree is finally beginning to bloom - it has been in the garden for years and only now is it blooming. It started as one stem, about two inches high, so I guess it needed to grow up. 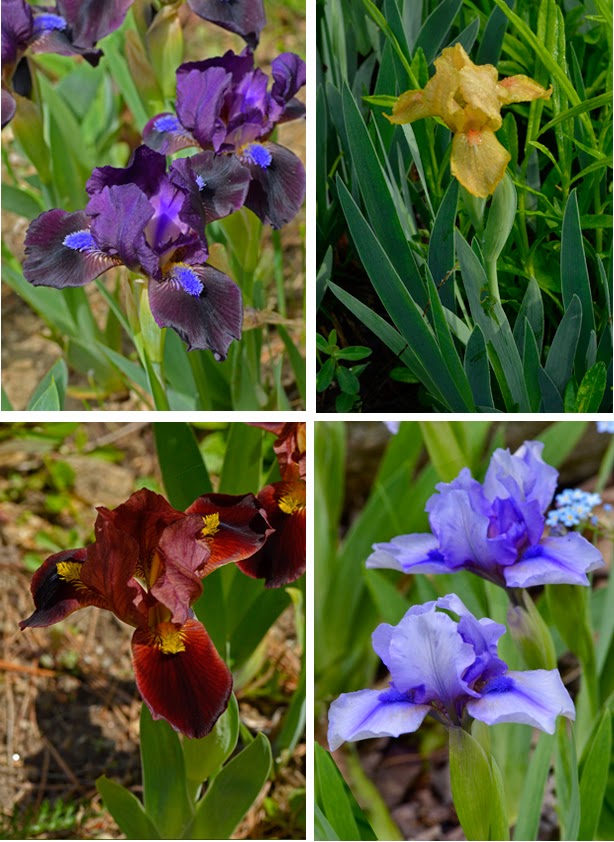 The dwarf bearded irises along the path to the Hillside are gorgeous. How did someone who decided not to have any bearded irises end up with so many? My excuse is that I had decided not to have tall bearded iris, and these are not tall. I keep finding them in pots at the nurseries (and stores) in the spring and fall for the colours, the satiny texture of the petals, the amazing form of the beards. I counted the different ones, and, well, never mind.
The path takes me around the Studio and into the Rockery. A friend gave me a piece of a Bloodroot she discovered which has yellow leaves. The flowers are the usual white, but the leaves are spectacular. The Forget-me-nots put themselves here, with their usual unerring instinct for where they suit. Forget-me-nots, like some lucky people, have Style. Thank you, Lee! 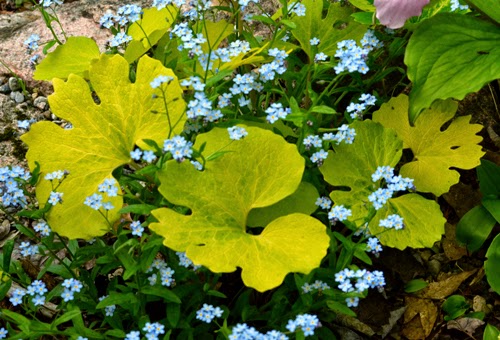 Another plant with good instincts is an ornamental strawberry, called, I think, 'Pink Panda'. A dumb name, but a nice, if stubborn, little plant. The flowers are quite large, and there are a few all summer long. It does however, insist on growing where it wants to grow, not necessarily where you might want it. I planted it at the top of a small wall, and it moved to the bottom. I put a piece in the front of a small bed of pale yellow daffodils, and it moved to the back.... fine, I'll just enjoy it wherever I find it. 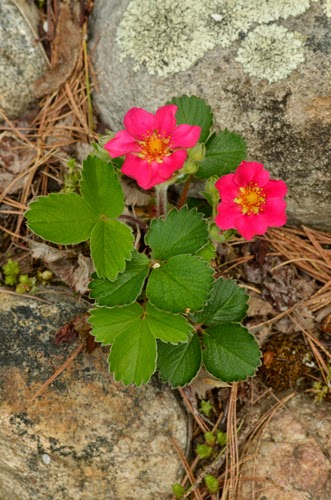 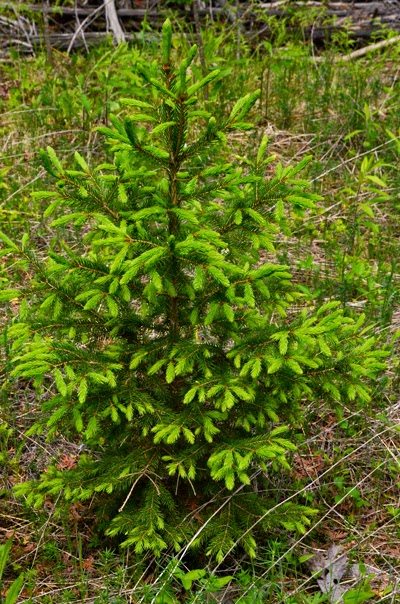 Continuing on my way around, I stopped for a minute to give one of the little self-seeded White Spruces a (metaphorical) pat on the head. They are headed to brief (but brilliant) careers as Christmas Trees, and I'm happy to see how bushy they are getting. The new growth is bright green and a bit droopy.

You'd be droopy too, if you had to grow 6 inches in about 3 days. 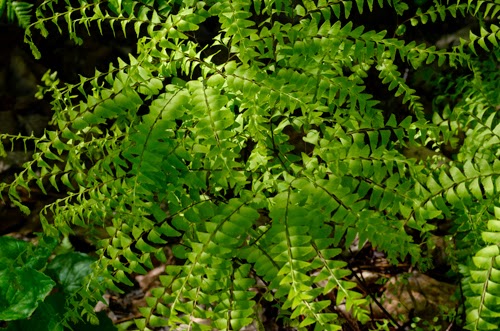 Everywhere, the ferns are springing up. They tend to rise later than many of the spring flowers, so sometimes I get a bit nervous and poke around carefully at the bases of last year's stalks to make sure there are tightly coiled green fiddleheads  waiting there. The new growth is unbearably green, so tender, so hopeful. The whole Sampler Garden, like the woods around it, is bursting with new growth.

I can even find something good to say about Ajugas - when they bloom, they do set off the new ferns beautifully . 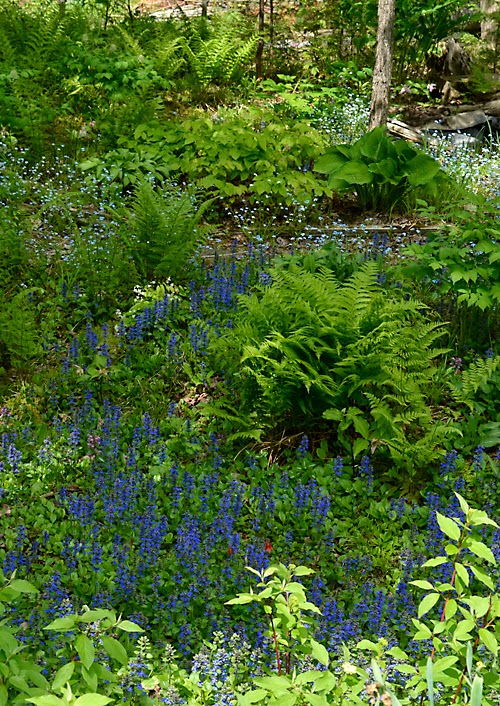 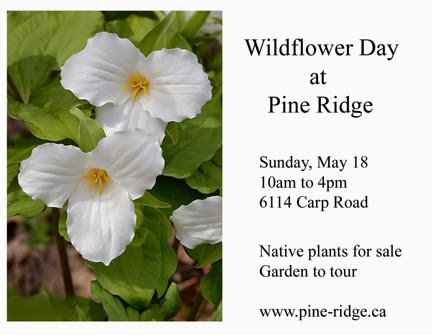 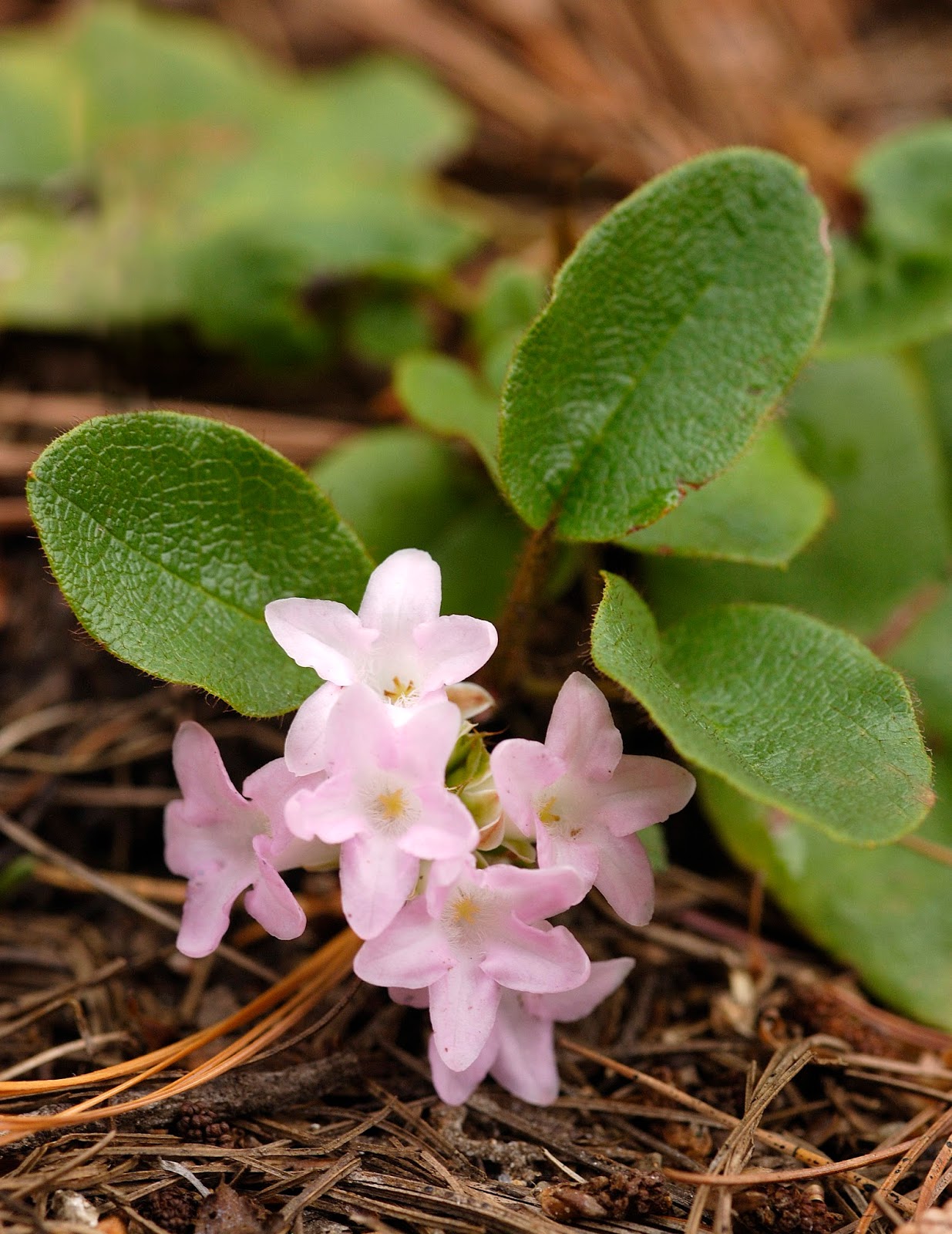