Some observations from a late Spring over-shadowed by a world pandemic.

It's still cold and wintery here. In the woods, winter takes a bit longer to arrive, and a lot longer to leave. Other gardens, those in open areas or in the City, already have blooming daffodils; I have snow piles. I did have the idea of getting started on the Spring clearing up one day last week when the sun shone and the air was warm. Didn't last long. The ground was still frozen.

There seems to be a squirrel family setting up housekeeping in the top of the hydro pole. This miserable pole is in the corner of my Herb Garden, near the house and visible from my office. Given all the rock here, burying the hydro line was pretty well unaffordable, but if I ever win a lottery, I'm getting rid of that pole. Meanwhile, I practice not seeing it. Anyway, all day a squirrel has been running up to the top of the pole with suspiciously fat cheeks, and coming back down clearly cargo-less. Crazy place for a nest. One year a small black bird lived there.  How do I get the top of a pole closed off to wildlife?

Speaking of wildlife, I've been having a dickens of a time with mice this year. I'm too soft-hearted (or maybe just too squeamish) to kill them, and every time I catch one and remove it to the far end of the driveway, another one moves in. I finally convinced myself they were coming in through the opening around the breaker panel, so I blocked them from leaving the laundry room. Worked, except there must still be one or two loose in the house because I occasionally still find signs. A leaf on my Hoya nibbled... a hole dug around a geranium's roots... mouse spoor in a desk drawer. I'm getting a cat. Just as soon as the humane societies are open again.

The winter was long, but not particularly cold. I'm very surprised, though, by the amount of lichens on the trees and shrubs. Sumach branches are covered. Every fallen branch I pick up is covered. I have never seen so many lichens before. 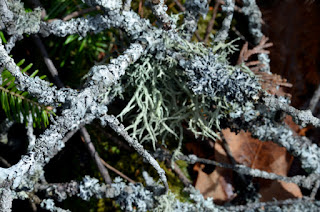 There seems to be a resurgence of interest in vegetable gardening. 3.76M chipmunks are delighted.

On a short walk along by the marsh yesterday, I was surprised to come across a small patch of False Morels. We had just had a flurry of snow pellets and they collected on the top of the larger one. They're often in or near that spot, but I've never seen them so early. 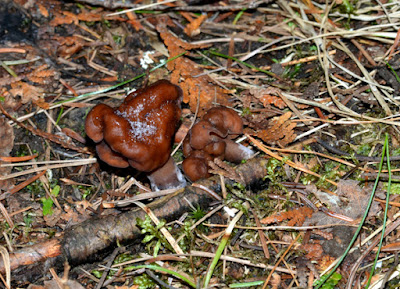 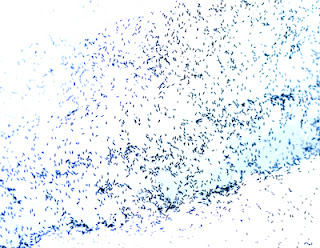 The next image is a tiny tiny fraction of the millions and millions of Springtails we had in the snowbanks a few weeks ago.

I always figure that lots of Springtails means lots of bugs all summer. So prepare yourself, the mosquitoes and blackflies are going to be fierce this summer.

Let's look at Snowdrops instead. Why aren't my clumps spreading? Oh well, at least they aren't shrinking. 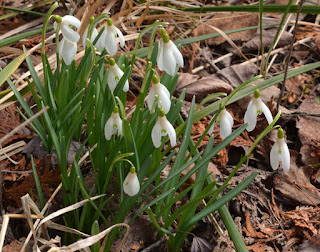 Now if the air would just warm up a bit, maybe we could get this Spring business on the road.