As usual with news, the Ladyslipper News is  mixed.

I'm absolutely disgusted, disappointed, furious and otherwise miffed off that three of my  Yellow Ladyslipper plants in the Sampler Garden have not appeared this spring. They were doing so well last year... now, nothing. I strongly suspect Enemy Action, that is, chipmunks. Chipmunks are a scourge. They tunnel everywhere and eat everything. They upend my pots and dig up anything freshly planted. This is the second time I've lost Yellow Ladyslippers in my garden while those in the woods are fine, so I'm sure it's them. 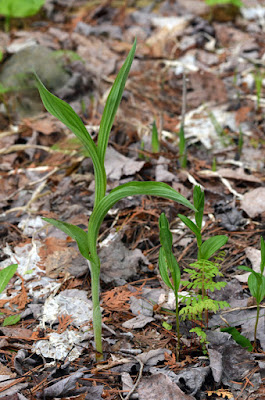 On the other hand, I'm delighted to report that my one plant of Ram's Head Ladyslipper, Cypripedium arietinum, is looking bigger and more vigourous than last year.

Not sure if it will bloom this summer, but it might. The top leaf is still tightly curled and I didn't want to risk damaging anything so I didn't check. You can see a small Oak Fern, some stems of a tiny Polygonatum and a Hosta in the background.


The Showy Ladyslipper clump is showing above ground. 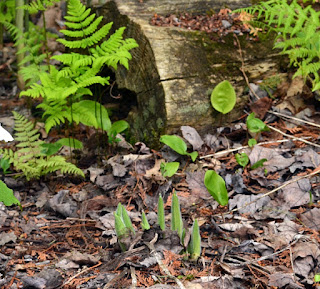 The clumps in the woods (in my Bog area) are looking healthy too. One of these was under a foot of water for a week, so I'm pretty impressed that it is even alive.

Not so sure about the Pink Ladyslippers. The ones in the woods haven't appeared yet, although the ones on the hill are up.  Odd that the ones which had good water last year might be gone while the ones that got really dry in the drought seem to have done alright. Not as many plants as two years ago, but still some. Looks like more fingers will have to be crossed although I suppose removing some of the small trees nearby which are shading them too much now may be more effective.

Now, nothing to do with Ladyslippers, more like one of those snippets of news they use to fill out a page in the newspaper, my Wood Anemone, Anemone quinquefolia, is spreading nicely beside the cedar it chose to get friendly with. I planted it some distance away, but it seeded itself at the base of a large cedar and has thrived there ever since. It's not a native form, being semi-double, but totally charming. 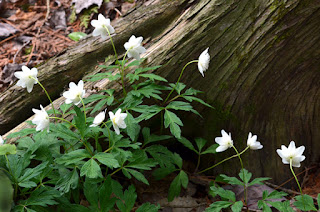 .
Back to Ladyslippers, one more good thing. Connaught Nursery has beautiful large potted plants of Showy and Yellow Ladyslippers at the Carp Farmers' Market. I'm going to be there early to get a couple new Yellows for my garden, although since this is the second time I've purchased plants to replace some eaten by Chippies, I may have to grovel a bit...

The bad news, not that it's so very bad, is that I have postponed my Wildflowers Day plant sale. It has been so cold this Spring that the plants in the pots are only now blinking and yawning and thinking about getting out of bed. For example, my Goldenrods are about 1" high... hopefully by May 28th the things in pots should be ready for the new season.

I will have a selection of native plants, many of them good for pollinators, and a limited number of Trilliums, both White and Red. Hours are 10am to 4pm, address is 6114 Carp Road. Contact me (see the left sidebar) if you have something specific you are looking for or have a question. Hope to see you!

The good news is, actually there are two pieces of good news. One, I am getting a new puppy! Her name is Elphin Rosie and she's a Border Collie. She'll be coming home the first week in June. She's mostly black, with a white stripe on her face, one white-tipped ear, a white-tipped tail and 4 white paws. She's totally adorable and I'm totally excited! Her main job will be Friendly Greetings, so if you come to visit you will see how talented she is at that!

Second piece of good news is, my Double Bloodroot is blooming. I bought this plant some years ago, but due to good management on my part, it first dwindled and then nearly disappeared and then gave it one last effort and succeeded! 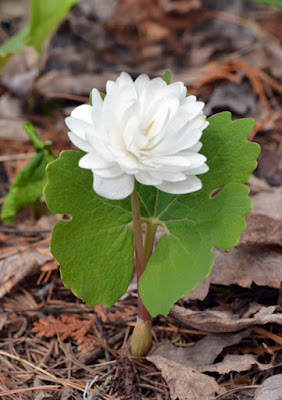 It's blooming a bit later than the singles and I understand the flower will last a bit longer. Most Bloodroots bloom for about 15 minutes, so that is good news too!