At about 3:40 EST this afternoon. The sky was overcast, with high clouds crossing rapidly from the South West. About 24C. Very little wind. Don't know what the barometric pressure was. Forecast was for scattered showers later, but it was dry at the time.

Things were, of course, happening. Somewhere south of my Peach tree, a minor government official paused in his study of a long report to get a cup of tea. On his way back to his desk he wondered if he'd still have a paycheck tomorrow. With four small children and a wife to support, the question wanted to fill his mind, but he resolutely put it aside and got back to his report. Further south yet, a much younger man surreptitiously reached for a young girl's hand; his heart skipped a beat when her hand met his halfway. A thousand miles to the east of them, a woman quietly removed her hand from the wrinkled hand of her old father, studied his face for a few minutes, not sure of her own feelings, and called the nurse. Further east yet, and somewhat north, a small group of children played a skipping game, oblivious to the war clouds gathering over their elders. Not far away, desert areas were too hot to cross; goats and men stayed in the shade. Despite the heat, two babies were born. In a vast city, far removed from the need to cross deserts, cars honked, men and women scurried and heat radiated up from cracked pavements. In a small town not far away, bargains were made, not always in the bargainer's best interest. Life, everywhere, was happening.

And I ate the edible portion of the only peach to ripen on my accidental Peach tree. 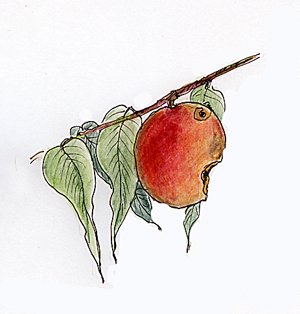