Seedy Saturdays and Seedy Sundays are popping up all over these days. If you don't know about them, they are events where various seed-savers, seed-sellers, seed-swappers and otherwise seed-ish people get together to swap, sell and so on the seeds they've collected. I'm going to one in Almonte Ontario on February 10. Since I don't have very many seeds (a few species, but not many), I'm bringing my Wildflower note cards and some Herb garden markers. 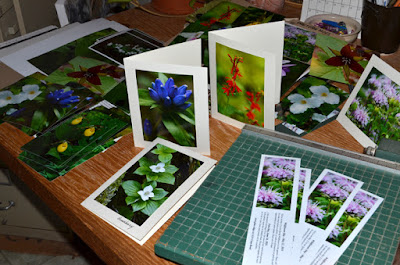 Well, to be honest, I'm going because it's fun! Last year I was delighted to get seeds of white Cleome and New Jersey Tea and I'm hoping for more great finds this year. Just being in a large room filled with keen gardeners is exciting too. So it's fun!


Seedy Saturday, Feb. 10, Almonte Civitan Hall, 500 Almonte Road, 9am to 3pm. There will be guest speakers, info tables by many gardening groups, seeds galore and, yes, photo note cards. If you come, please stop by my table and say 'Hi'!
Posted by Lis at 4:26 PM No comments:

If you go down to the woods today... 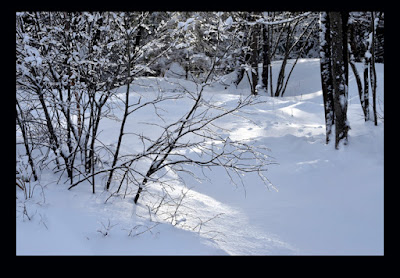 You're in for a big surprise...

Actually, no, you're not, but you might find some interesting stuff just the same. Seed heads, mosses, bark... if you look closely you can find all kinds of things. 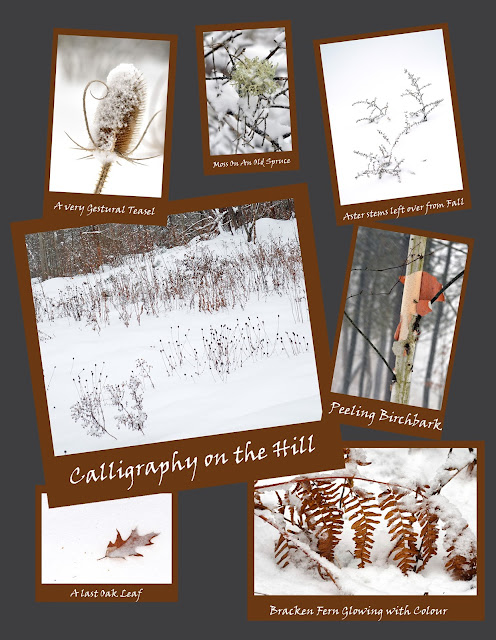 Maybe even a small dog sitting in the snow looking bemused: 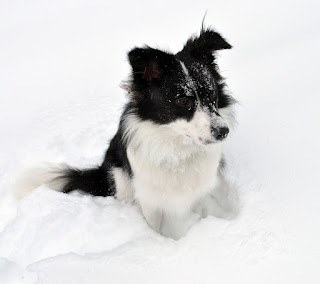 If we gardeners are surprised at how different our gardens look in the snow, think of how it must be for a dog!
Posted by Lis at 5:44 PM 2 comments:

Even in the winter, one can have a gardening surprise!

Rosie and I were out for a 'walk', or should I say, 'slog' the other day, wading through snow that was up over my knees and her head. Poor dog, the only way she could get ahead was by making a series of small leaps. It worked but she got quite tired. Still, it has been very cold and we've been a bit cooped up and we both wanted to be out so we kept going.

Eventually we got to the top of the ridge overlooking the marsh. I stopped for a brief rest and noticed a small branch from a conifer blown down and resting on top of the snow. 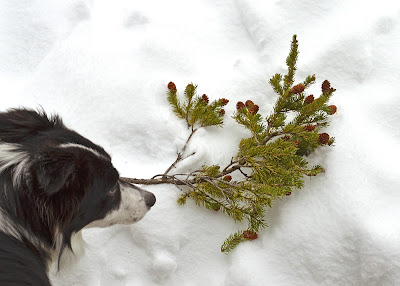 That's Rosie  photo-bombing my picture of the twig! She was finding it pretty hard going and was following me very closely. The twig interested me because the cones seemed very small. I picked it up and carried it home. Here's a closer look at the twig with the cones: 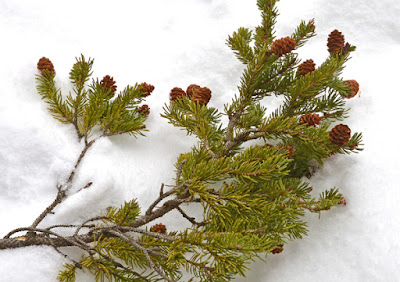 I looked it up in my Trees In Canada (Farrar, 2006), and it turns out to be Red Spruce, Picea rubens. The book describes it as 'uncommon, but present' for my area. Of course it is hard to interpret the distribution map very closely, but I know it's uncommon here because I've never seen such small cones before. I have a lot of White Spruce, Picea glauca, but their cones are always between 2" and 4" long. These are mostly less than 1". Also the needles on White Spruce seem a bit longer, darker green, and less curved. I don't think this can be Black Spruce, Picea mariana because that is mostly found right in swamps or other damp areas, and this tree is growing on a rocky slope quite a bit above the marsh.

The cones are really cute: 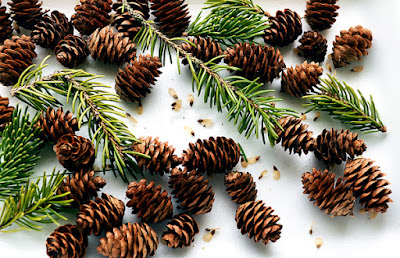 I'm going to plant some of the seeds and see if I can grow a few Red Spruce trees.

And I'm going to get my snowshoes out!
Posted by Lis at 5:53 PM No comments: