Finally had a chance to take a good look at the garden. The entire summer seems to have disappeared in a rush of work and other commitments, but now at last I can turn back to one of my favourite activities.

Speaking of summer, it does seem to be over. One of the Maple trees near the house is turning red at the top, the nights have a nip to them, and the sun is down by 8 in the evening. I'm sensing an early fall. The last few years we have had long drawn-out autumns; this year I suspect we won't. 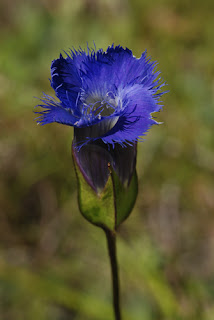 I checked the tiny meadow where I've been trying to establish Fringed Gentian, Gentianopsis crinita. It's a biennial and actually not easy to grow. I know a place where it grows by the acre, mixed with White Goldenrod, Solidago ptarmicoides, various grasses and low shrubs. It seems to like the alvar-like conditions there: dry, thin soil, little competition from other plants. On the other hand, I also know a place where it grows beautifully in a mixed woods with seasonally damp spots. So you would think it would be flexible, but I have found it tricky. I've gotten the seed to germinate, but every time lost the seedlings when I tried to transplant them. They are really tiny! So then I tried sprinkling the seeds in what I hoped might be suitable spots and had slightly better luck. The little meadow I mentioned  had about 30 plants in 2014. This year there is one. I'm not sure quite what this means. There weren't any in 2013, so perhaps I should consider it a 100% increase over the previous blooming year, given that it is biennial, and hope for the best in 2016!


The strip behind the Studio and below the Sand Hill seems to have reverted to swamp. Purple Loosestrife (yikes), the unending Field Horsetails, various reeds and sedges, and several Swamp Beggar Ticks, Bidens connata. The Beggar Ticks are over 8' tall! They reminded me of being a teenager in Northern Ontario. We called them 'Stick-tights'  because the seeds would get into your socks, or your horse's tail. I once spent the better part of an hour combing just a few of the seeds out of my dog's fur. Tootsie sat patiently the whole time, but my orange and pink plastic comb had combed it's last. Poor Tootsie, he was a big and handsome dog, and my brothers and I gave him a big and handsome dog name, but my Mother called him Tootsie and of course that was the name that stuck. She really wasn't safe when it came to naming pets.

Coming back around to the Rockery I saw a Monarch. At least, I'm pretty sure it was a Monarch. It was quite large and flew strongly, unlike the Viceroys which are smaller and fly in fits and starts. It swooped around me and landed nearby a few times, but never opened its wings when it was sitting so I couldn't check the lines on its hind wings. But I'm pretty sure it was a Monarch. The fall migration is supposed to be going through right about now. That's only one this summer, but I guess that's better than zero.

A Hop Vine has seeded itself into the edge of the woods and has scrambled a good 30' up a pine. When I looked up I saw dozens of tiny yellow hop heads hanging down all up and down the vine as it spiraled around the tree trunk. Striking, but it is such a weed. The yellow version has pretty much taken over a bramble patch nearby and I try not to look at it, knowing how hard it will be to remove. The roots are like cables, stretchy rubbery un-cut-able cables. Tarzan could use them. 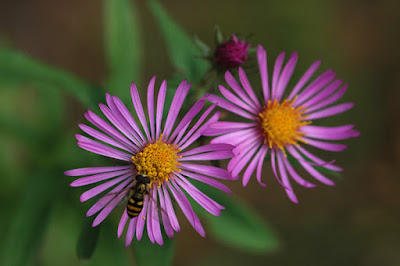 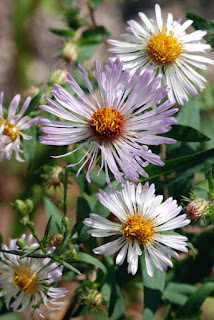 The Asters are in full glory. One plant of New England Aster at the front of the Crabapple Garden has been in bloom for a month, very early and a long time, and I wonder if it will do it again next year so I plan to keep it and try pieces of it in other spots. If it is consistently early, it will be a useful 'find'. But it could just be a fluke. I love the aster colours, 'jewel tones' is a phrase made for asters. Most of them are lavender-blue, but a few are amethyst pink and a very few are white or pale mauve.

The other Asters are as confused as ever. I keep trying to identify them, but I think it is hopeless. They cross and re-cross, leaving me with plants that have leaves like one species but flowers like another...

One short white-flowered one, possibly a form of Symphyotrichum (most of the Asters are now Symphyotrichum) novi-belgii, is blooming merrily pretty much in the driveway. Must move it someplace as it looks worth keeping.

There are entirely too many Goldenrods... not enough Closed Gentians... the Pink Turtlehead is gorgeous... Cosmos has filled many gaps, as it does so well... we won't look at the weeds... do I dare order some Tulips?