It was the first day of Spring today and it really felt like it. The sun was warm and bright, the air was buoyant, snow was melting, birds were singing... Rosie and I wandered around for a while, but the snow is still too deep in the woods for an actual walk, so we retreated to the Studio for a very spring-like activity. 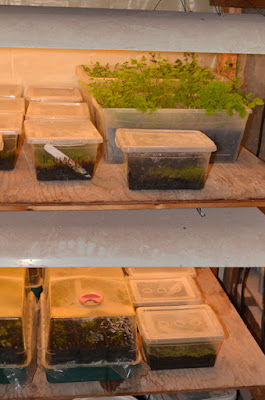 I grow ferns from spores. Here is a  picture of part of my setup. The dusty white areas are the tops of the fluorescent light fixtures, which are suspended about a foot above the shelves. It's a very simple setup: two shelves with two lights suspended above each one. It's in my pottery Studio, hence the dust. The small plastic boxes contain the spores sown on potting mix.


The label you see is inside the box, pressed in beside the mix so I can see the name when I take the lid off. I used to write the names on the lids... you can guess what eventually happened.

Most of these spores were sown last fall, a few just a couple of weeks ago. The ones from last fall were ready for some transplanting work, so, once I located that darn trowel of mine and some pots and potting mix, I got to work. 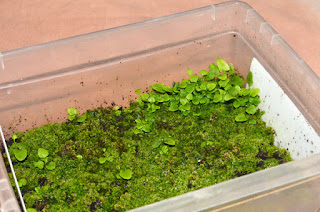 Here is what it looks like inside one of the small boxes. The green moss-like stuff in the middle is the germinated spores, which at this stage are small, 1/4" or less, prothalli. They are flat, roughly heart-shaped, and have many reddish hairs (rhizoids) which anchor them to the mix.

Two structures develop under each prothallus, one or several  antheridiums which will produce sperms, and an archegonium which will produce an egg.  The sperms 'swim' to the egg in the thin layer of water under the prothallus. Once fertilized, the egg will begin to grow and divide and soon the baby fern, the sporophyte, appears.

This box is Walking Fern, Asplenium rhizophyllum. You can see many small sporophytes, especially in the upper right-hand corner. 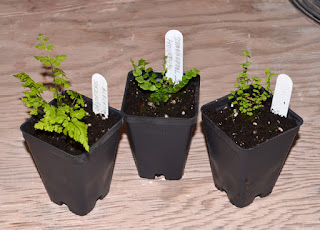 Once the little fernlets get big enough, I will transplant them into small 3" pots.

I didn't do the Walking ferns today, but I did quite a few others.

These are three different ferns, a Dryopteris dilatata, an Asplenium trichomanes, and an Adiantum aleuticum. Cute, eh? 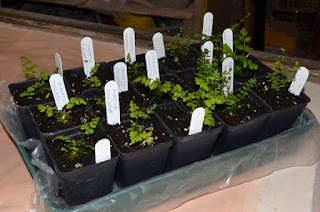 Here's a whole tray of cuties. I don't usually have a tray of all different species, usually the whole tray will be one kind, but today I had a number of different ones outgrowing their boxes. In every batch of spores, some plants seem to start more quickly, and grow more robustly, than the others in the batch. Later I'll have more of each kind and, being the compulsive sort, I'll no doubt sort them into groups. I have some plastic mini-greenhouses and they are very good for growing on the little fernlets. Right after they've been transplanted I keep the vents closed so the humidity will stay high and the little ones can recover from the trauma of being potted up. 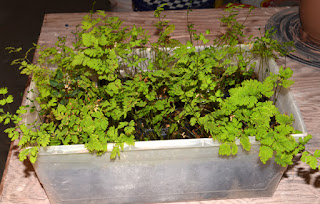 After a month or so, when they seem to be growing well, I start gradually leaving the lid off so they can get used to normal air. This is another mixed box, but this time it is because some of the 2016-17 crop were just too small to be planted out last fall and I have had to coddle them through the winter.

It was so warm and Spring-ish today that now I'm optimistic they'll make it!