Sunday, and a glorious Summer day: blue sky, dry air, soft breeze, birds singing...  I made myself a mug of coffee, said 'C'mon' to Faithful Dog and wandered out. Everything in the garden looked fresh after the rain we had on Friday. It's been an awful hot dry summer and it hasn't been much of a pleasure to inspect things lately so it was a very welcome change.

The first part of the garden I went into was the Sampler Garden where I inspected the ferns and my little (and new) bog garden. The little bog was looking pretty good: the Blue Vervain was strong and healthy, the Foamflowers seemed to have taken hold nicely and were even spreading a bit, the Barren Strawberries were much bigger than they had been in the pot, and the Western Holly Fern, Polystichum lonchitis, had several new fronds! That one is not easy to grow in our humid climate and the spores I carefully nurtured all winter ended up as just one plant.

Why is it that no matter how many seeds or spores I sow, I so often end up with only one or maybe two, plants? I have a hunch that if I could answer this essential question my gardening would improve enormously.

I left the Sampler Garden through the back exit, climbing over the big pile of wood chips that are still waiting to be spread on the paths. I've done this so often lately that the pile now has an actual path across it. Works fine, easy enough walking, just a bit uphill and then downhill... hmmm, no. I really will move those chips soon.

Turning back up the driveway towards the Rock Garden I paused to inspect the Gaillardia. It's supposed to be a perennial but with me it mostly seeds itself around and makes new plants every year. The native form is yellow but mine seem to be red and yellow so of course I like the pure yellow ones best. They're a wonderfully cheerful flower and great in a vase, easy to grow and bloom for weeks, but why oh why must they always grow in the driveway? What is it about gravel that attracts them so much? 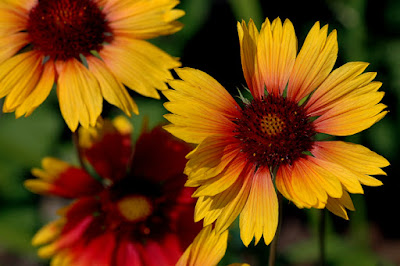 Another one that refuses to live in a flower bed and grows and blooms magnificently in the driveway is Mexican Hat flower, Ratibida columnifera. I like the way the 'cones' stick up boldly above the drooping petals. They all point the same way, like sunflowers. 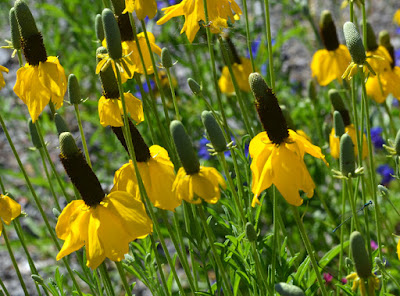 I've seeded both in several other spots, but the ones that persist are in the driveway. Maybe I should plant them where I want them, and then drive on them.

After this, I decided to go on a mushroom hunt. I'm going to a workshop called Fabulous Fall Fungi in late September and it's made me more aware of the mushrooms and other fungi here at Pine Ridge. The serious drought in 2012 had an awful effect on the mushies - for several years I hardly saw any, but luckily this year there seem to be more of them again. Granted, most of them so far have been near the Marsh or the Beaver Pond, areas that stay damp longer in dry spells, but still, seeing more fungi is definitely a good sign.

We found tiny red 'Toadstools', shiny yellow buttons that reminded me of rain-wet plastic slickers, fat soft brown ones the squirrels collect and store by hanging them up in the branches of trees and quite a few more. That rain on Friday really brought them out, I think. 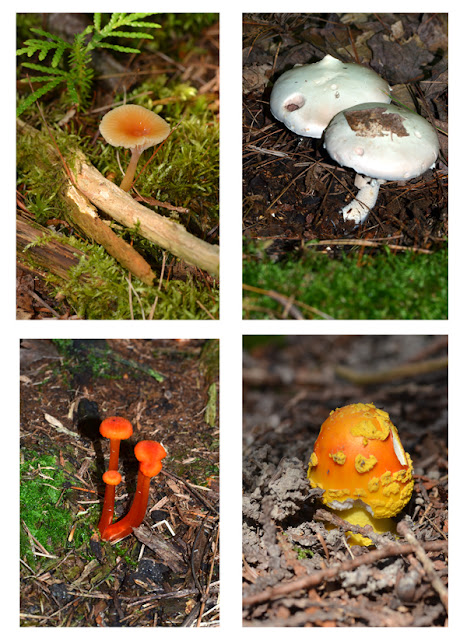 Dog and I followed my trail along the Marsh; that is, I followed the trail and she waded in the mud and then raced to catch up with me, until we came to the area at the back of the property where the wind storm in May knocked down so many trees. At that point we were forced to climb over and under half-down pines and between and over and sideways through a tangle of flattened birch, and through a Prickly Ash thicket and up over rocks... all in an effort to get to the back where I wanted to see if there were any fungi under the huge old Maples. I didn't find too many, but did note that a Groundhog had set up operations right at the fence line. Rosie was most interested and I had to restrain her from initiating an immediate large scale excavation project. Then the prospect of pushing our way back through the tangle was too daunting and I searched for a way around it. Following the path of least resistance, I soon found myself in a patch of huge cedars and alders.

Oops, where were we?

It's interesting how the most essential of life's questions sneak up on you like that.