Had the most excellent day! Packed my larger backpack with essentials such as camera and lunch, and headed down to Marlborough Forest. This is a huge natural area, something like 45 by 60 kilometres, completely inside the City boundary. It's a mosaic of City-owned, Province-owned and privately-owned properties, more or less administered by the City according to Provincial regulations, with the co-operation of a number of groups like Ducks Unlimited, the Ontario Snowmobile Association, the Rideau Trail Association and others. In practice the deer hunters and the ATV enthusiasts do what they want. This means you stay out during hunting season!

But it's a great place to explore an alvar. The area I went to, off Paden Road near Burritts Rapids, is an enormous alvar. It took a bit of a walk to get in to it, and walking on the chunks of rock they put down to make the trails is no joke, but once I got there it was great fun. Completely flat as far as I could see, with clumps of junipers interspersed with open grassy areas and the occasional low willow or alder clump. What I was looking for was Solidago asteroides, the White Upland Aster or White Goldenrod. It has had a number of names, but the botanists now put it firmly in with the Goldenrods. I have one plant in my garden, grown from seed, but I really wanted to see it growing 'in the wild'.

There were thousands! The picture on the left shows a typical plant, about 16 - 18" high, growing in with the sparse grassy alvar plants.


OK, I'm having trouble arranging these images! But the captions should explain them. If you know what the tiny purple thing with the startling blue stamens is, please tell me!

The pale Fringed Gentian was a real find, too. I didn't get good pictures but enough to prove that I saw it. Most blue flowers have the occasional white clone. I'd love to have this in my garden, but I'm not having any success growing Fringies, so far. I've had the seed germinate but lost the seedlings to damping off, I've have little seedlings which I forgot to check on and which died (I assume) in the first dry week, and seed sprinkled in a wet area down along the driveway has so far not resulted in sheets of blue. Maybe next year? They are biennials so maybe I'm just not seeing the new plants. I searced the Paden alvar area for next year's Fringies, but couldn't find anything that looked like a gentian rosette. Do they only start to grow late in the season?

It was getting late by the time I hobbled back to the truck. And I did hobble. Those miserable rocks on the trail were so hard to walk on my feet were so sore I could hardly get my hiking boots off.
Then, just as I was ready to drive off, I happened to look over my shoulder behind me, and saw something I've been looking for for years. At first glance I wasn't sure it was what I thought it was, but I had to stop and take a look. Yes! A white (almost white, anyway) form of New England Aster! 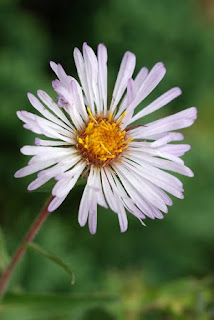 It was growing on a mound of rubble obviously pushed back by a bulldozer or some such machine, and right beside the trail the dirt bikers had made to get around the 'no vehicles allowed' gate across the trail. I admit it, a small piece of the plant came home with me. A research sample! I potted it up, and so far so good. These asters are really easy to grow so I am hopeful.. It may be a purchased plant discarded there or it may be a lucky accident, but whatever it is, I'm delighted to have it.

That is to say, I was the one with the secateurs, and 'Iceberg' was the rose bush that got smaller.

I can't really say I pruned it. The darn thing was sprawled across both of the paths that meet at its corner, lying in wait for any ankles that might be going, or trying to go, by. It is much too big and too sprawly for that spot, but is so healthy, and blooms so exuberantly for nearly a month every summer, that I just can't remove it. I didn't intend to have a monster rose in that corner but there it is, sort of like an Uncle Fred who has to be invited to family events but whose behavior than causes eyes to roll and voices to sharpen. I actually wanted 'Seafoam', but the nursery man told me 'Iceberg' was just the same. Right.

I thought at first maybe I could get in underneath and remove some of the longer canes, but that wasn't possible. It was a tangle of canes, most of them over 6 feet long, and there was no way I could get a hand or arm underneath without serious injury. Iceberg is one of those bushes that has stiff curved thorns, which catch and grab whatever gets close. The many canes all criss-cross into a dense tangle. Reaching in and cutting out canes at ground level is nerve-wracking. You work your hand in very carefully, secateurs at the ready, and a twig springs back and embeds itself in your wrist, you jerk your arm back and three more twigs catch hold. Since you're holding several canes back with your other hand, you now need a third hand to work the first one free....  I had heavy leather gloves on, and a long-sleeved shirt, but even so I got half a dozen long scratches and any number of pokes before I was done. After that I wasn't about to  carefully cut back each spent flower cluster, so just cut everything that extended beyond an imaginary circle about 6 feet across or higher up than about 3 feet. Now it looks like a turned-out pudding, but at least you can get past it without bloodshed. Usually.

I wonder if it was 'Iceberg' that gave someone the idea of the 'pavement rose'? Or is mine the only 'Iceberg' in the world that wants to be a ground cover?
Posted by Lis at 6:46 PM No comments: