The annual sale of Native Plants at the Fletcher Wildlife Garden in Ottawa is next Saturday. I've been brushing up my baby ferns and other plants to get them all spiffed for their turn in the shop window. I've got some nice things - Yellow Ladyslippers, Wild Ginger, Blue Iris, Foamflower, Wood Poppy.... Ebony Spleenwort, Clinton's Wood Fern and Polystichum tsus-simense (not a native but nice) and more. Here's a shot of the table, in the rain: 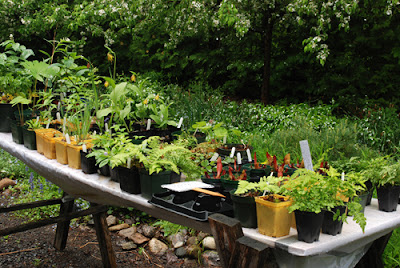 Doesn't look like much, but there are almost 100 plants there, and mostly only two or three of each species. The reddish things in the middle are from Connaught Nursery. They are baby Pitcher Plants (Sarracenia purpurea). They must be 3 or 4 years old now but still babies, and super-cute! Pitcher Plants are carnivorous, well, maybe we should say insectivorous, and you can some fun growing one in a basin on your deck. All it needs is a few inches of sand, some peat moss on top, and enough water to stay damp at the bottom. The 'pitchers', which are modified leaves, fill with rainwater. Insects go in, perhaps to shelter from the sun, perhaps in response to some chemical lure, and can't climb out because of the downward-facing hairs on the pitcher's inside walls. The victim decomposes in the water, and the plant absorbs the nutrients.. A sneaky way to survive in wet, nutrient-poor bogs! 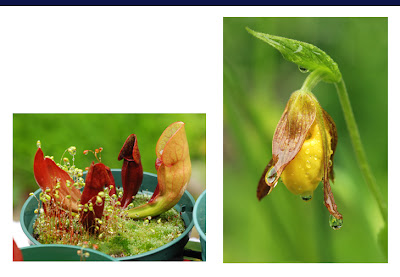 The wet bud is on one of the Yellow Ladyslippers. We've had a lot of rain lately, and today is no exception. Hard to get any weeding done in the garden, but good for the ferns!
Posted by Lis at 9:32 AM No comments:

Went for a walk in Shaw Woods yesterday. Millions of blackflies were delighted.

Shaw Woods (Shaw woods) is an outdoor education centre located South of Pembroke, Ontario, and West of Cobden, Ontario. It includes a beautiful stand of mature Beeches, a grove of Hemlocks, a Pine plantation, a wetland area, a rocky ridge, and some mixed woods. Just about every native plant habitat you could wish for!

I parked in the small parking lot, taking a bit of care not to get stuck like I did last time.... the ground is soft, and the truck sinks in a bit. (I wasn't stuck for long.) Clouds of blackflies immediately arrived, but I decided to soldier on, and headed off towards the Pine plantation. I wanted to see if the Pink Ladyslippers were showing their noses above ground. On the way I walked past a large patch of mixed Violets growing in a sunny part of the trail. 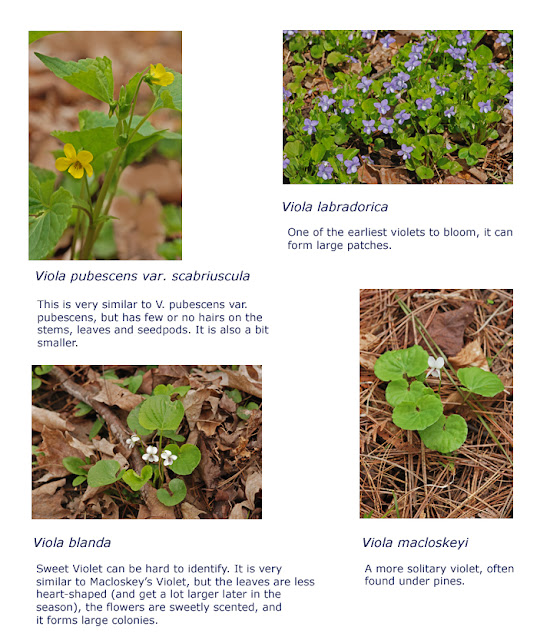 Then I headed over to the Trillium Loop Trail. What an amazing number of Trout Lilies there were under the trees! And so many flowers. Some years not so many bloom, but this year there is a bumper crop. Gardeners puzzle over how to get Erythronium americanum to bloom in their gardens, but I am starting to think they just need good soil, enough moisture, and time to mature. And enough sun in the spring. 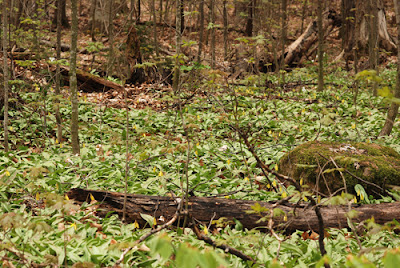 The Trilliums were also out in full force. A lot of fine Red Trilliums, T. erectum, including one group of three stems with cream and pink blooms. White, pale yellow and cream flowers are not all that unusual for this Trillium, but I have never seen one this shade before. 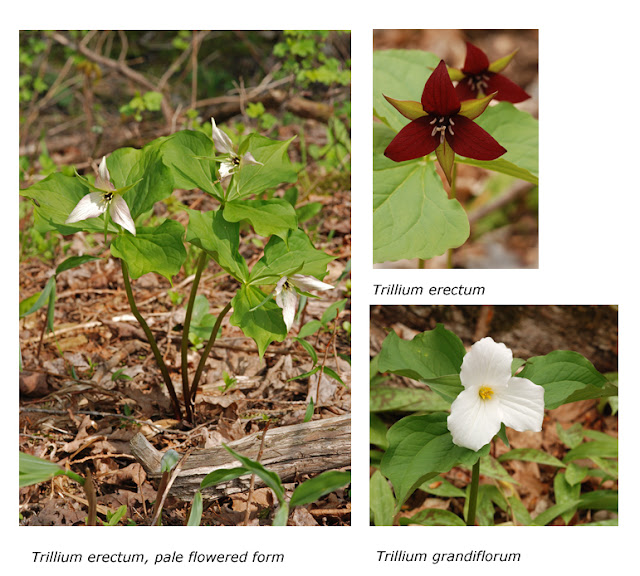 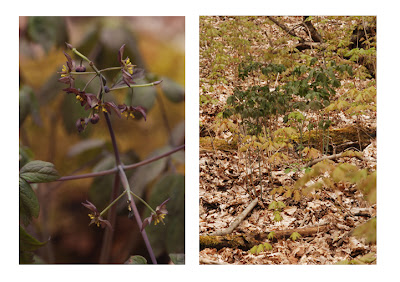 Near the Hemlocks there are a lot of Blue Cohosh, Caulophyllum thalictroides. The dark foliage shows up well in the bare Spring woods. The flowers are rather goofy, but the berries later in the Summer are a beautiful dark matte blue.

After this I could hardly wait to get back into the truck to escape the flying fauna. Hot, sticky and itchy only begins to describe how I felt. But a peanut butter sandwich, a drink of water and 5 minutes with the air conditioning on in the truck did wonders and I decided to check out the other part of the Shaw Woods, across the road. This isn't really part of the main area, but there are trails there so I went over. I drove there, all of about 200 feet, so I wouldn't have to walk back later. I parked over to one side in the short driveway.

There is a Hydro dam there, with a large pond on one side and a rushing stream on the other. After this the path goes up fairly steeply, up to an interesting rocky ridge. The glacial erratics in the Woods on the other side of the road apparently came from this Ridge. The ridge face has interesting lichens on it, including several kinds of Rock Tripe. 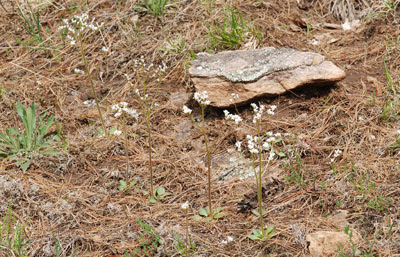 Up on the ridge the Early Saxifrages were blooming. These always seem to grow in lines. I guess they root into cracks in the rocks. The seeds that don't fall over cracks probably can't get established. I looked at them with some envy. I've been trying to get this plant, Saxifraga virginiana, in my garden and so far I have managed to lose all but one tiny plant. The first batch of seeds drowned when I forgot and left the pot out in the rain and the flat filled with water.... the second batch didn't make it through the hot dry summer we had that year, and the third batch, which only gave me a half-dozen plants, the darn squirels dug every one of them up. I re-planted them but the damage was done. So this Spring all I have in the rockery is one tiny plant. At least it is growing in a crevice! 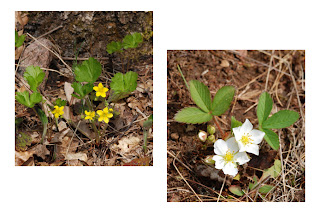 Barren Strawberry, Waldsteinia fragaroides, was spread like a carpet under all the trees and shrubs.The flowers are much like a Strawberry flower, only yellow. The leaves are a fine fresh green. This is a great ground-cover in a lightly shaded garden. Just for fun, I took a picture of a real Strawberry to put beside the look-alike.

In among the Waldsteinia I found a number of plants of Hooked Violet, Viola adunca. This is a violet that likes dry places - a bit contrary of it.You think of Violets wanting a damp spot, but not this one. 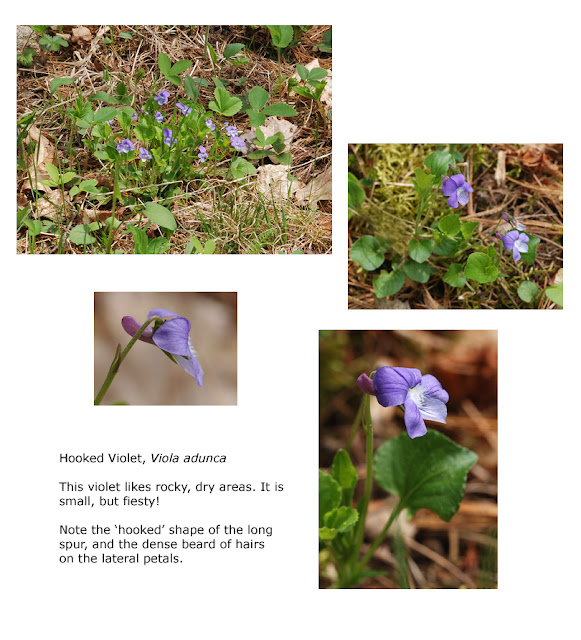 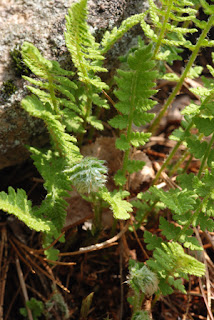 Also on the ridge was a plant of Rusty Woodsia, Woodsia ilvensis, it's fresh fiddleheads covered with long white hairs and looking like little furry balls. That's another plant that you'd think would like a shady damp spot, but like Viola adunca, it thrives in sunny, rocky spots.

When I got back down to the hydro dam, a white truck with the Ontario Hydro logo on it was parked right behind my truck. I looked around and sure enough, there was a fellow on the dam, fiddling with the winches and things there. I dropped my pack in the truck and moseyed down. I said 'Hi', which didn't impress him. He just scowled. 'Fine', I thought, 'be that way'.

'How long are you going to be?' I asked.

So I figured, well, he parked behind me, now I'll get some revenge. So I hung around and showed great interest (feigned of course) in what he was doing. It backfired, though, because he became quite chatty and explained everything! They use the winches to place large square logs on top of the concrete weir to raise the dam level. Somewhat ingenious, and somewhat awkward, I thought. He admitted that occasionally a log would get away on them and have to be dragged back up on to the dam.

What joy to see my old favourites in bloom again, yet what heartbreak when the flowers shatter and they are gone again for another year. Sometimes I think joy and heartbreak are two sides of the same coin. Babies, puppies, flowers...... all bring such sudden leaping joy, and leave such longing behind when they grow up. At least with babies and puppies you have the children and the dog to enjoy in the future, with flowers there are just leaves or, worse, bare spots in the garden. I'll just have to look at my pictures a lot! And stop being so greedy! 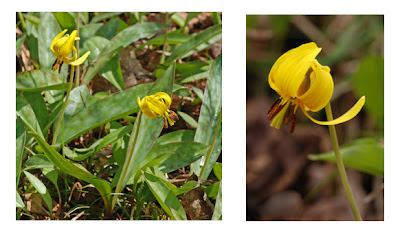 The Trout Lilies, Erythronium americanum, are wonderful this year. Far more of them have flowers this year than usual. I have acres of the leaves at the back of my property, but most years there are only a few blooms. This year there are dozens.Nobody is quite sure what makes them bloom or not bloom.... quite a puzzle. 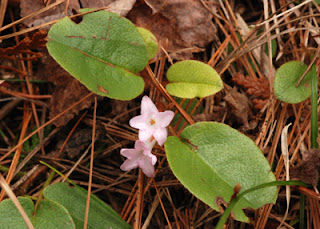 Another great favourite is Trailing Arbutus, Epigea repens. It is a shrub, but a trailing one. It likes north slopes and pine woods, so I put a few plants under the huge pines beside my driveway. They seem happy there. The flowers don't last long and the plant is not terribly impressive, but it is one of the first things to bloom every year. It is also sweetly scented, quite worth getting down on your hands and knees for. 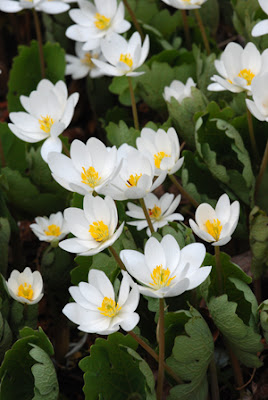 Bloodroot, Sanguinaria canadensis, is also very early. It's flowers only last a few days, but are spectacular when they all open in the Spring sunshine. My plant is spreading nicely and seeding around a bit. I'll have some to move into my woods this summer. There are already a few but I want sweeps of them!  Bloodroot loves rocky terrain, so it ought to be pretty happy here. 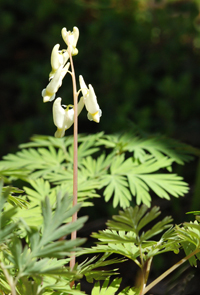 A tiny plant that I wish were more inclined to do the same thing is Dutchman's Breeches, Dicentra cucullaria. The original plant is certainly spreading, but there are few flowers and so far no seeds. It needs a slightly damp spot, I think, and mine is perhaps too dry. Either that or it is intimidated by the Pink Ladyslippers all around it. These are just showing their 'noses' and it looks like it's going to be a good year for them. 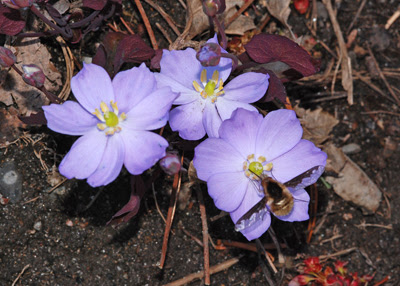 Here is a non-native plant which is another spring ephemeral. It is Jeffersonia dubia, or Japanese Twinleaf. It is just like our native J. diphylla, except that the leaves and flowers are suffused with pink-mauve. I've been looking for our native one for years. I know where there are some plants, but I've never managed to get there at the right time to snaff some seeds. And I would have to snaff them as they are in a Conservation Area run by a person who never lets anyone have any seeds. I'm not sure if I'd actually do it, but the plant is so hard to come by that crime is beginning to appeal to me. I'm not sure what the 'bug' is that is visiting the Jeffersonia, but there have been lots of them this Spring.