If you ever hear I've been taken away by little men in white coats, you'll know that it was scale insects that did it.

I have a dozen or so orchid plants. They're a mixed bag but mostly Cattleya types. I got them about 5 years ago at an Orchid Show when they were small and affordable. Since then I've waged war against these miserable scale creatures. I'm not sure what kind they are - there appear to be many different sorts - but likely one of the soft-scale species.

We go through the same pattern every year, it seems. In the Spring I put the plants outside and they seem nice and clean and healthy. They stay that way all summer, getting bigger, putting out new roots, setting buds. All well in Orchid World, I think. Then it starts to get cold outside so I bring them into the plant shed. Two weeks later the darn plants are covered with scale.

Then I wipe them off, laboriously and not-very-patiently. I have tried some insecticides but not only did they not seem to have any effect (probably because the scale beasties are protected by their waxy domes) but also now we can't buy insecticides in my area and I have none left. So the only option is to use rubbing alcohol and a tiny piece of paper towel on the end of a thin stick to wipe off every scale I can see. And that, of course, is the problem. They hide under the papery covers of the pseudo-bulbs, and probably also on the tops of the roots near where they emerge from the bulbs, and as soon as they get into the warmth after a cool period they all lay eggs. Many eggs, it would appear. And of course they all hatch. The hatchlings are called crawlers and that is what they do. They crawl to a nice juicy spot on a leaf and dig in to feed and build themselves a waxy dome house. Luckily, I don't think they can crawl far enough to spread to other plants. I make sure plants don't touch and hopefully the crawlers can't make it down their home pot, across the wooden slat bench and up into another pot. They are less than 1 mm long, so that trip would like us walking about 1000 miles.... with no food or water.

This winter I'm going to be really vigilant and have one more try at winning this war. It'll be worth it as the orchids are all starting to bloom and last year several of them were quite stunning. Five or six plants are already showing bloom spikes, several with fat buds. One plant, which I think also bloomed last year, has a number of spikes, each with one bud. They look like they are going to be large flowers. Good incentive to get me into the shed to water.... and try to get rid of those rotten bugs.

Quick, before the snow comes, take a look at this stump: 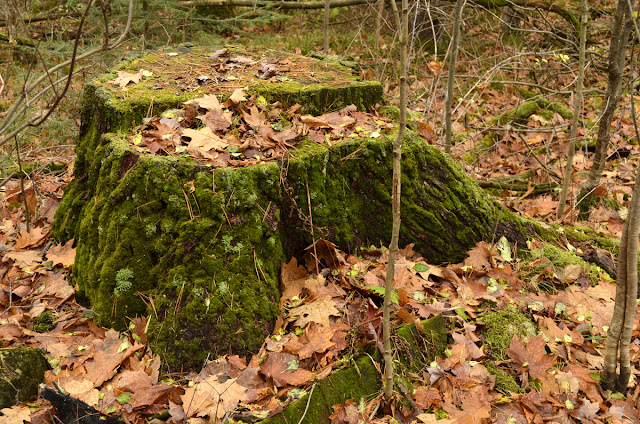 I'm not sure how old it is, maybe somewhere in the 20-year range, but it is almost completely covered in various mosses, lichens, fungi and liverworts. A great many different things are growing on it: 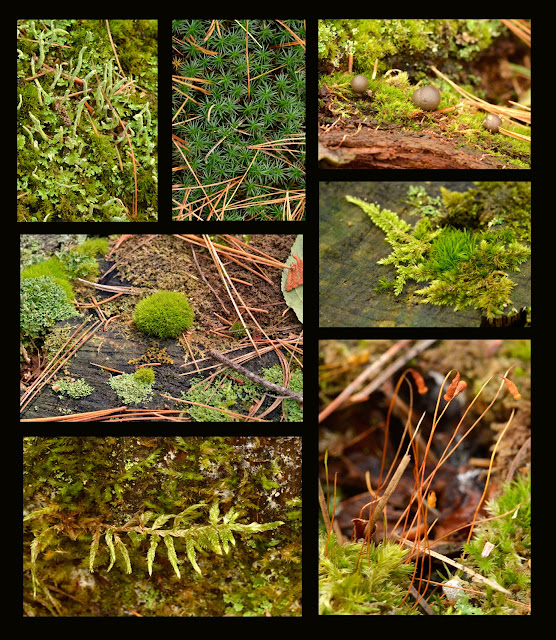 I particularly like the miniature moss-ball. Some mosses, like the blue one at the top, grow by spreading sideways, others by growing from a fixed centre. Yet others, like the one on the bottom, seem to head off for parts unknown like tiny explorers.

Looking even closer, I am amazed at some of the  wonderful patterns that appear: 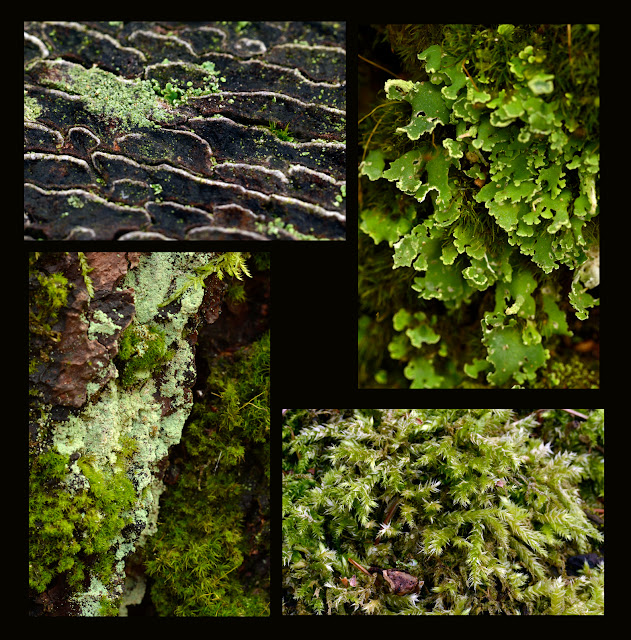 Too bad I don't have my microscope with me!