I hope you have snowdrops.

If you do not, get some. They are just about the only thing that will bloom in time to save the gardener's sanity while she waits for the snow to be gone and the ground to be dry enough for actual gardening to begin. Without Snowdrops, the outlook for future normalcy in the gardener would be grim.

In our area, we can grow all three of the main species. There are about 20 more different species, but sadly they are just not available here so I don't know whether they are hardy here.If you ever have a chance to get bulbs, or more likely, seeds, of any of the others, take it, and remember your friends. 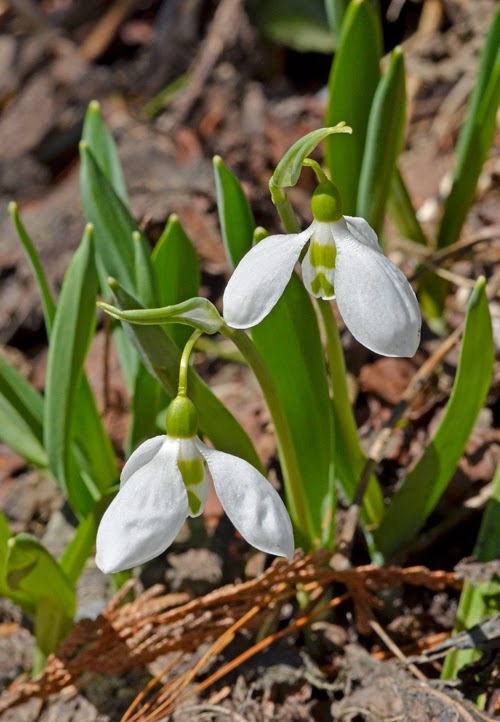 The ones we can get and which I know do well here are Galanthus nivalis, G. elwesii, and G. woronowii.

G. nivalis is the one that causes Snowdrop fever in susceptible gardeners. There are too many varieties to count, there are clubs for the afflicted, there are official registries, competitions, books.... if this sort of obsession appeals to you, a quick on-line search will make you very happy. Not that the search will be quick because of course if you are smitten with Snowdrop Love, you will spend the rest of the day following the many, many links. You'll have a great time, and maybe by the time you are done the snow will be gone.

G. nivalis is also the smallest and daintiest of the three. It is the one that makes us kneel in the wet leaves so that we can get close enough to admire the purity of the outer petals and the brilliant green markings on the inner ones.

G. elwesii is slightly larger in all ways: the flowers are a bit larger, the leaves are wider and taller, the bulbs are larger too. It is every bit as beguiling as G. nivalis.

All the Snowdrops are of course bulbs. The conventional wisdom about growing them is to move them 'in the green', that is, to move and propagate them by digging them up with a good sod and re-planting them immediately. Sadly, we cannot often do this as we are forced to order the bulbs in the summer and they will arrive, dry, in August. A good source (in fact the only source I know of, not counting little bags of dried-up bulbs sold by big-box stores at strange times) is Botanus. They have a fine on-line catalogue, very suitable for more time-wasting while you wait for the snow to go. Ask for more than a few bulbs as they will not all grow but you will end up with enough. They spread.

Last, and the opposite of least, is G. woronowii. It has decidedly wide leaves, but the flowers are as delicate as those of G. nivalis.

All the Snowdrops are trouble-free and need no special care. The foliage goes dormant without calling attention to itself and once established, the plants will return every year, just when you really need them.

As gardeners, we do have a tendency to keep our heads down. We get so involved with our own gardens, we sometimes forget to look up and see what is going on around us.


Here are a couple of interesting garden-related events happening soon which are worth looking up for. Best of all, I have a nifty give-away for one of them!

The Canadensis Botanic Garden Society is, as I mentioned a post or two ago, bringing Alexander Reford to Ottawa to talk about The International Garden Festival held at the Reford Gardens. This world-renowned garden located near the mouth of the St. Lawrence River was started by his great-grandmother Elsie Reford and is now open to the public in the summer months. It is a most unusual garden, begun as a private garden and now famous both for its scenic beauty and for its impressive stand of the Blue Poppy, Meconopsis betonicifolia. The lecture is being given twice, both on the evening of Thursday, May 1, first at 6:00 pm, and then again starting at 8:00 pm. Sort of like two dinner sittings on a cruise ship!

There is lots of information about this event on their website including details such as the location of the lecture (Cereal Barn, Experimental Farm, Prince of Wales Drive), parking, cost, etc. etc.

All you have to do to win them is.....  leave me a comment or send me an email saying which native plant you would like to see featured next in my Know and Grow box. Next Sunday evening, April 13,  I'll draw one name out of the metaphorical hat from those who have done so, and that person will be the lucky winner! Be sure to include your phone number or email so I'll be able to get in touch and let you know how to collect your tickets after the draw.


The other fun event happening soon is a Creativity Blitz. What is a Creativity Blitz? Well, let me just quote from the press release: "What better way to explore your own creativity than in the natural beauty of the 200-acre High Lonesome Nature Reserve, a property conserved in perpetuity by the Mississippi Madawaska Land Trust Conservancy. On Saturday, May 3 and Sunday May 4 from 9:00 am to 3:00 pm young and old alike are invited to participate in the first ever Creativity Blitz at this oasis of tranquility in the Pakenham Hills. Join with others and connect with Nature and explore your creative side!" Being the first one ever, nobody really knows what is a Creativity Blitz! But if you come and join in, you can help make it what it will be.

And have fun while you are at it. I'll be there as a volunteer and possibly will be working on my Fairy Village project..... nope, not telling you any more. It's all free, kids are welcome and the buzz in the air will be from more than the bees.

You can read the rest of the press release, which gives all the details of time, place, contact info and so on, on the Misissippi Madawaska Land Trust Conservancy website.

There are extensive trails and there will be a number of interesting (creative) projects going on to watch, so come and join in!

Having suddenly gotten interested in Milkweeds because of wanting to help Monarch Butterflies, I think I mentioned in an earlier post that I sowed a few Milkweed seeds. These were seeds from a pod which had been sticking up above the snow all winter. I wondered if they would be alive and if they would germinate.

To my delight, one seedling quickly appeared. 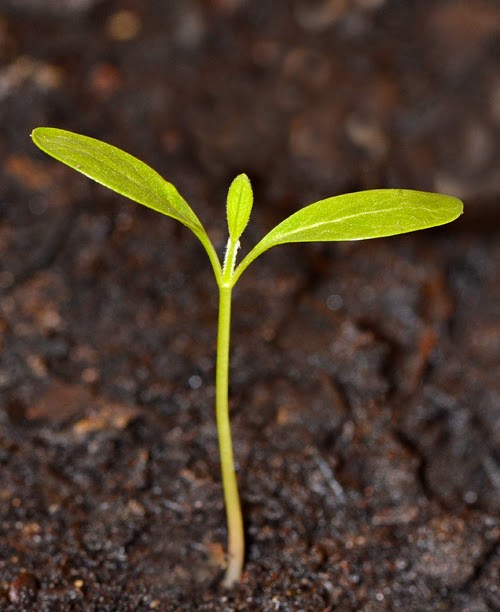 You can even see the 'furriness' typical of young Milkweed plants, at least on the stem under the second pair of leaves.

But several weeks have now gone by and no more babies have popped up. Wondering what was happening, I did what I should have done in the first place, and checked a couple of books. In one, William Cullina's most excellent Growing and Propagating Wildflowers of the United States and Canada (I think there has been some propagating going on inside that title), I read that "seed germinates without a cold period, but it is slow and sporadic". Oops. Now I can't put the flat outside because of the one seedling so I'll just have to be patient. Oh well, I'm slow and sporadic myself.

Then I did some more reading, particularly in Milkweed, Monarchs and More by B. Rea, K. Oberhauser and M. A. Quinn. This is nifty little field guide to life in the Milkweed patch and is available from the MonarchWatch website. I learned about the Milkweed's unusual flower structure and its curious pollination mechanism. 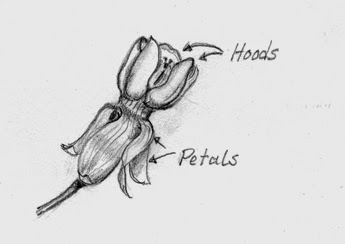 These little sketches are adapted from the pictures in the book. In the upper one you see the typical Asclepias flower - just one, not the whole umbel - with the petals reflexed right back to the flower stem (and the sepals hidden underneath) to expose the business part of the flower to whatever bee, butterfly or beetle may be passing by. The 'hoods', which look like petals to us, hold nectar to entice the passing bee, butterfly et al. Between each pair of hoods is a slit in the central column. Each slit contains a  little body (shown in the lower sketch) called a 'pollinarium'. 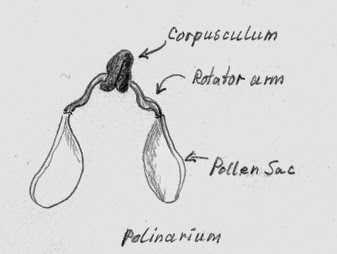 Each pollinarium has a sticky pad, a 'corpusculum', which attaches the pollinaria to the column, and from which two 'rotator arms' extend. The pollen is collected in sacs at the ends of the arms. When an insect touches a corpusculum, it sticks to its body, and when the insect leaves, it pulls the pollinarium out of the small slit. The arms are called 'rotator arms' because they rotate when the arms dry in the open air, so as to get the pollinarium into position to get stuck into the next slit the insect visits. Typically, pollinaria get stuck on insects' antennae, and do not easily release until the insect has had time to move to a new flower.

One pollen sac contains enough pollen to fertilize an entire umbel. The pollen grains grow down the column hidden inside the slit, fertilize the ovules, and the distinctive Milkweed pod forms.

Turns out there are about 110 species of Milkweed in North America. There are only 3 in the Ottawa area, the Common Milkweed, Butterfly Weed (A. tuberosa) and Swamp Milkweed (A. incarnata) although there is some thought that a fourth, A. exaltata, may occur not very far south of here. As well, there is a species, A. sullivantii, which is extremely similar to A. syriaca, hybridizes with it, and also may occur in the southernmost parts of the Valley. It differs mainly and most obviously in being smooth, while A. syriaca is usually quite downy.

Common Milkweed is an 'early succession' plant, that is, it is one of the first species to move in and colonize open or disturbed ground. Sometimes it eventually gets crowded out by other species.

Until this year, Milkweed was on the Ontario Noxious Weeds list, which meant that you weren't supposed to encourage it.... luckily for us, and hopefully the Monarchs, this is being changed.