Ah, Spring! The wind blows warm, the wind blows sharp, the sun shines, the sun hides, and my mood goes up and down with the weather.

I'm excited to see the Snowdrops, so pristine, so white, blooming with snow still piled up only a few feet away. 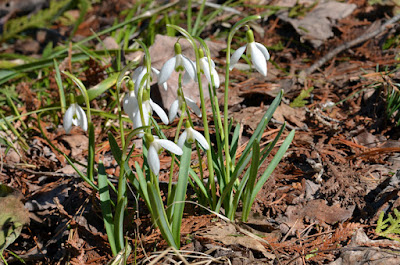 I wish they would spread. Years ago, I saw a yard not very far from here that had thousands of Snowdrops under a large stand of Maple trees. They must have self-seeded; why don't mine? I did try splitting a clump last year, but they don't seem to have made it through the winter. Do I try again?

My tiny pool is still a giant ice cube. I can see, though, that it will be a job to remove all the leaves that have fallen in. It is every year, but it seems worse this year. And of course I haven't a clue as to where my spring rake is hiding.

A small Muscari, I think the variety 'Valerie Finis', is in bloom. It has self-seeded! The blooms are very small, only about 3" high, but a lovely clear soft blue. It does seem to like it dry as it has spread into a spot where there is barely an inch of soil over a rock ledge. It blooms well before the regular dark blue Grape Hyacinth. 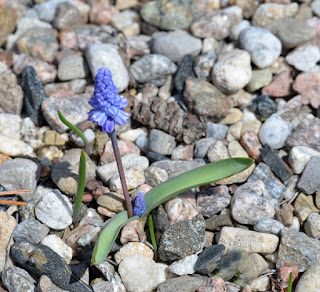 Right beside where the Muscari are blooming there was, once upon a time, a nice cluster of Trembling Aspen. They were very small 10 years ago, but had developed into 20' high, graceful white-stemmed trees that turned a wonderful yellow in the Fall. I was looking forward to enjoying their rustling sounds for many Falls to come, but it was not to be. The beavers, having eaten or otherwise destroyed every edible tree near their pond, discovered them and embarked on a Major Project. They made a 300' long 'dragway', chomped down every Aspen, large or small, and dragged them down to their pond. All that is left now is just one last section of trunk, balanced somewhat precariously across the large Pine that fell in last year's windstorm. I wonder if they'll get it cut up  too and moved, or if they'll leave it.  If I were a lot bigger and stronger, I'd pick it up and throw it at them - a temper tantrum is very tempting right now!

We're talking trees a bare 30' from my Studio.

Several patches of Chionodoxa are blooming. A nice pink in the Sampler Garden: 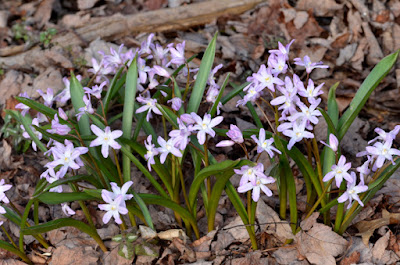 And the more usual blue in the Crabapple bed. Only one bloom open here, but there will be a cluster. It seeds around a bit, and is always a nice surprise wherever it pops up. 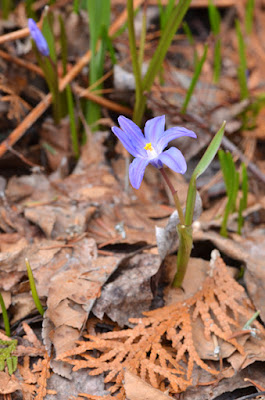 There is a white form as well, but I haven't found it yet. I do have a white form of Scilla, Scilla bifolia alba. It's very small and delicate but charming: 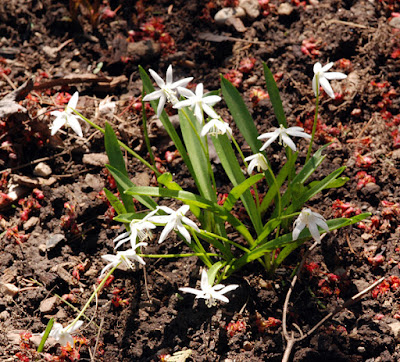 That picture was actually taken last year. You can see lots of fallen Red Maple flowers. This Scilla is a bit later than the other small bulbs, although this year several clumps are already opening.

These early Spring bulbs are hard to tell apart and often sold under the wrong names. I'm not sure I have mine all correct! The Chionodoxa were sold as Scilla; and the white Scilla was sold as  S. sibirica which is quite different, blooming later, with the flowers a strong medium blue (although I expect there is a white form), and the flowers shaped like tiny half-opened umbrellas. There are Pushkinia and bulbous Iris as well. All are worth having.


Lichens seem to have liked the past winter. Everywhere they seem more extensive than they were last year. This one is quite large, maybe about 8" across, and very vigorous. It's mixed in with another one that looks like the tongues on leather shoes. I must try to get a picture to show you, but here is the round one: 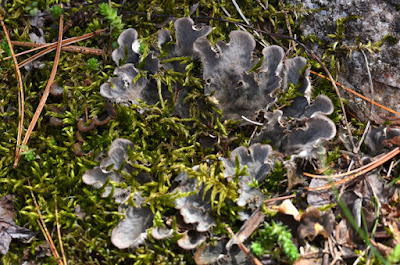 Crocus here, however, are now mostly historical. The chipmunks seem to have gotten all but the one called Ruby Giant (which is neither ruby coloured nor giant). It's spreading a bit. A glorious colour, and a perky flower. 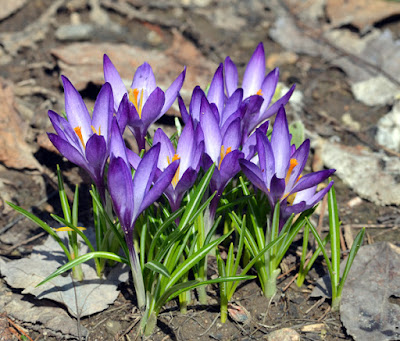