Maybe I'm not disciplined enough to ever be a good gardener. I started this afternoon with a quick walkabout, making careful mental notes of the work that had to be done. It was obvious that the Herb Garden was in bad shape, overgrown, full of non-herbs, with a whole bed of chives that had finished blooming never-mind-how-many days ago.... a mess, in fact. I made a neat list of the (many) garden jobs that need to be done and put and put Fix Herb Garden right at the top.

I started by cutting the chives right down to the ground. You might as well, the old stems will turn yellow and fade away anyway. Cutting them right back leaves a bare space for a bit, but they soon put up new fresh stems and will look alright for the rest of the summer. I have the usual magenta chives, but I also, thanks to some kind friends, have some pale pink and some white ones. And I grew some really tiny ones from some seed exchange seed, only about 5 or 6 inches tall, with flowers the size of small marbles. But they all need to be cut right back or they'll seed everywhere. Having done that, and remembering that they had already established an outpost in the Rockery, I went to cut those back as well.

Three hours later I was ready for a shower, having had a fine time weeding a corner of the Rockery.

Now tomorrow, for sure, I'm going to tidy up the Herb Garden. That is, if I don't spend hours mooning over the Roses, which are opening and looking gorgeous even though the bushes are very short after the cold winter and which certainly need to be photographed. 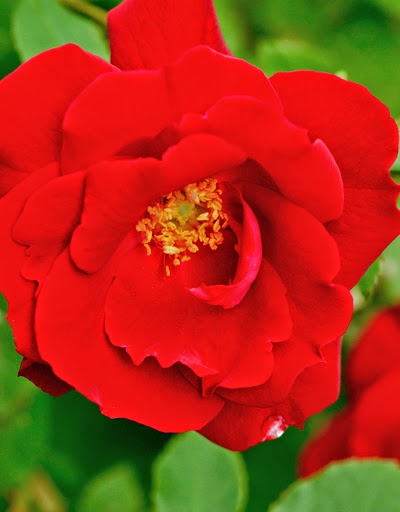 Or admiring the Digitalis grandiflora 'gloves': 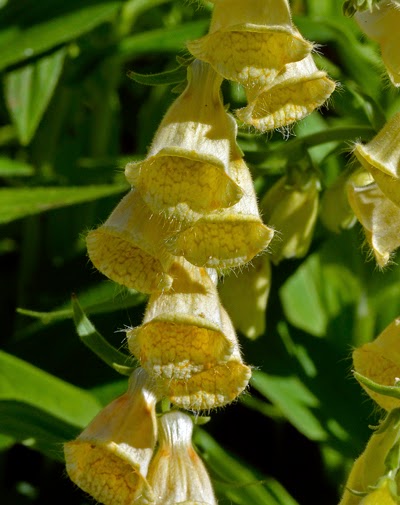 Or the wild hairdo flowers of the Honeysuckle that has climbed to the top of the birch tree: 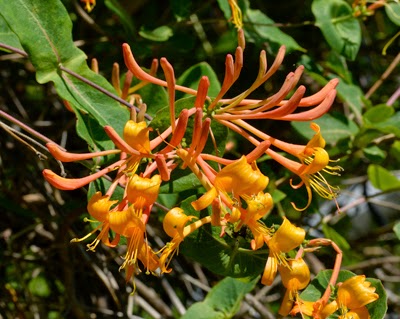 Or getting into any of the other fine activities that distract me from my careful to-do lists. Oh well, the great thing is to have an up-to-date to-do list. How else would you know what job you weren't getting done?
Posted by Lis at 2:53 PM 2 comments:

Having been fully occupied with a couple of Serious Projects lately, I have hardly had time to even look around my place. This morning I thought I'd take a quick gallop around just to see what was in bloom, having once again missed the 15th of the month, which is supposed to be Blooms Day in the world of garden blogs.

Well, plenty of things in bloom. A few dandilions still, not many,
but a few. Lots of fleabanes, standing up above the low plants they are shading out, looking soft and pink and innocent as usual. Plenty of what I call the stretchy weed - don't know its real name, but it stretches itself along the ground under better things and when you pull on it, it seems to stretch. Its flowers are tiny but that's deceptive. Each tiny bloom will become a hundred thousand (or so) seeds, and they will all germinate next time it rains.

Lemon Balm has as usual reared its ugly head in sundry spots. By the way, never plant more than one Lemon Balm. If you do, you will decide dead-heading looks like a lot of hard work, you'll put it off and eventually forget about it completely, and it will shoot its little prickly seeds all over your property. They will all grow, and each little plant will have roots into the next township. Sort of like ajugas, only taller.

Daisies are doing well, I see. And they seem to have made some sort of alliance with that hot magenta Geranium that seeds around. Pretty enough, but I'll have to toughen myself and yank them as they are both much more aggressive than any of the 'real' flowers. 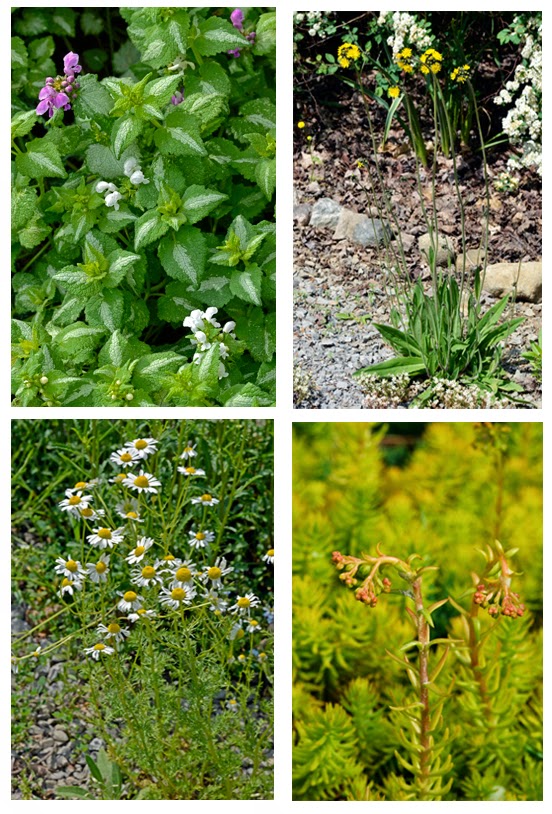 Moving briskly now (coffee cup nearly empty) I see that the Lamiums have outdone themselves. I have Lamiums where other people have grass... or rugs or pavement... all shades of white, pink and almost-red. The leaves vary a lot too. None of which excuse its tendency to take the inch and then grab the yard.

Hawkweeds, three kinds, doing quite fine, so glad you asked. This one likes the gravel, but then, what doesn't. I think the real way to start seeds is not to get little pots or flats, good soil, water carefully yada yada, but just to toss them somewhere on the driveway. Everything vegetable grows in the driveway.

Chamomile certainly does. And it refuses to grow in the Herb Garden.

Sedum 'Angelina', guaranteed not to set seed or spread in the garden, is now everywhere and blooming nicely, thank you. 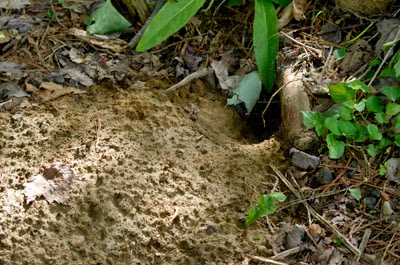 I see the dear chipmunks have established another outpost, this time under a cedar near my path in the Sampler Garden. These things happen when the gardener isn't around to blast the dear things with the hose. 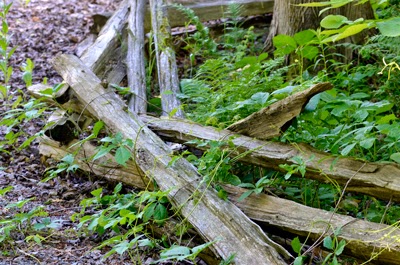 The fence appears to have met with a slight mishap. The resident Hound doesn't like a certain Black Squirrel and I guess it visited, ran up the large Cedar on the corner and taunted him. A certain amount of Leaping Up and Barking must have ensued, leading (sigh) to a certain amount of Fence Rebuilding. It'll have to wait, I'm busy. 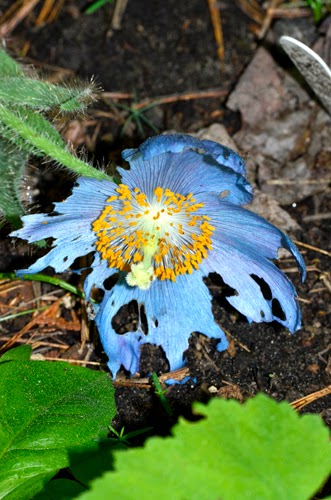 A quick jog down the hill to the Marsh trail to check on my one Meconopsis bud. It was starting to fatten before I got involved in other things, and, as it happened, before the monsoon rains we had last week. The plant was crashed over, the flower was lying on the ground and I see the slugs had a fine feast.

But I did have a flower on my Meconopsis! The most success I've had in years of trying! I got 20 seedlings from 3 packets of free seeds, planted out 15, 12 survived the winter (and it was a cold one) and one put up a tall stem with one bud on it. I know you are supposed to cut off the first flowers so the plant is more likely to bulk up and become a perennial, but I left it as I may never have another one.

Sad, but what a beautiful blue!

And guess what, I did have something nice in bloom! The Showy Ladyslipper nearby had two flowers. It's only a small plant, having had a slight setback when a beaver (muskrat, squirrel, dog???) dug it up two summers ago. 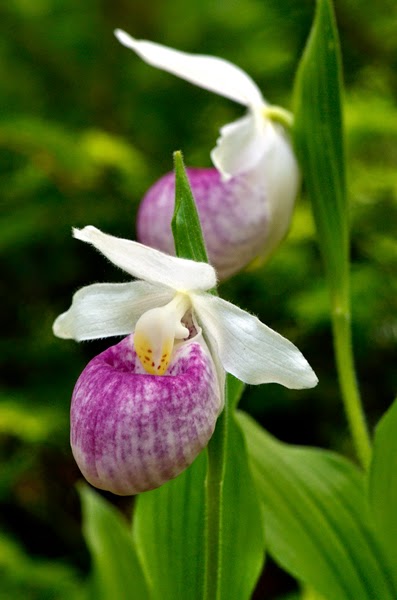 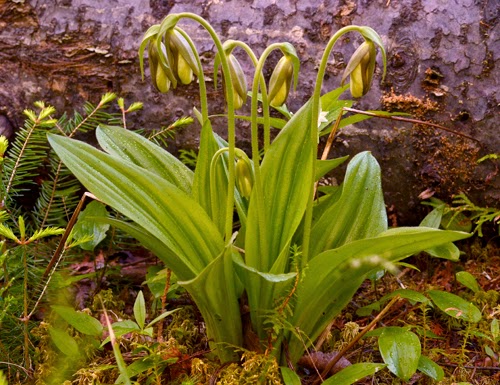 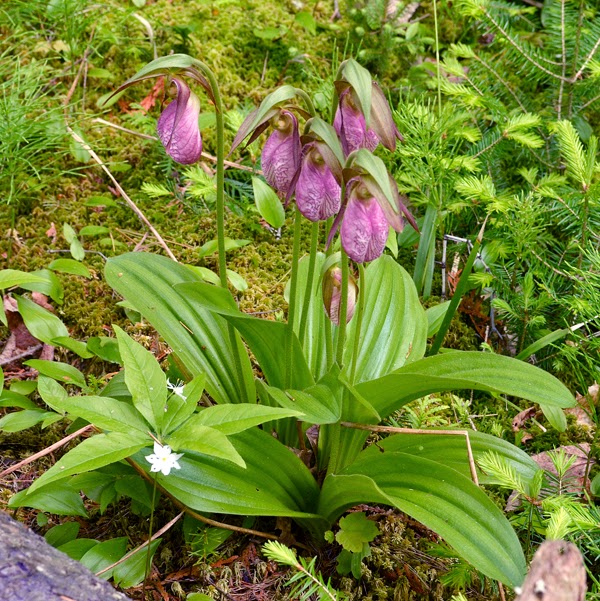 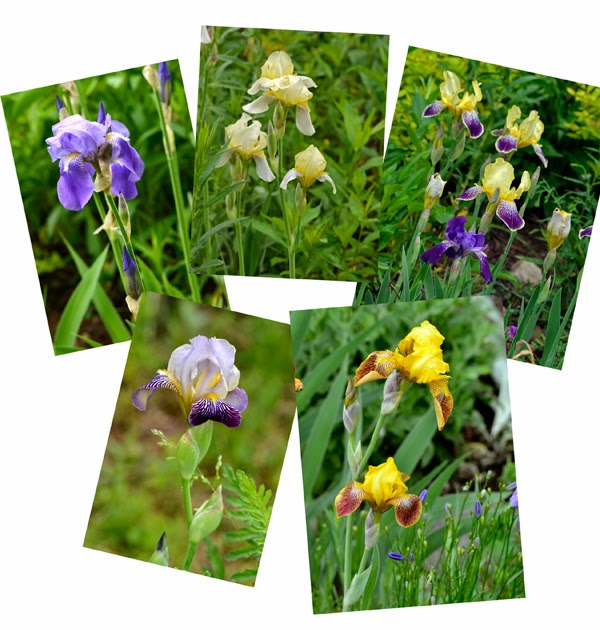