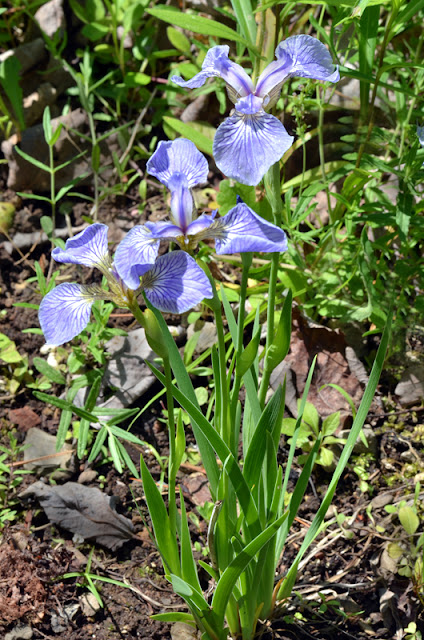 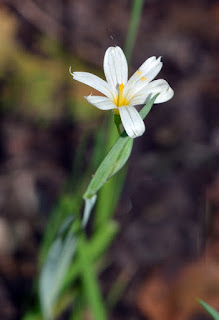 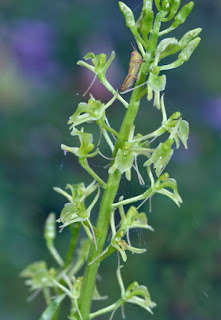 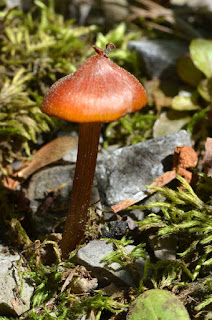 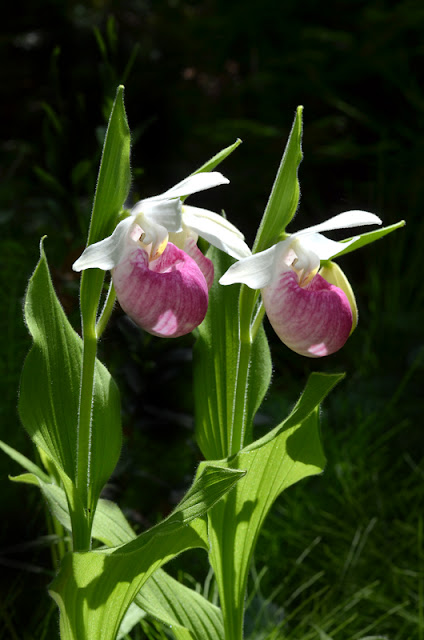 Of Violets, and Ferns


The last few days in the garden have been so beautiful you just want to walk around and stare at everything. The ferns, especially, are at their most beguiling. They always start a bit later than the rest of the plants, coming into beauty after the Trilliums and the spring bulbs. We've had it very wet and cool this spring, so the early flowers have all been, while late, quite spectacular. The ferns around my little pond are outdoing themselves: 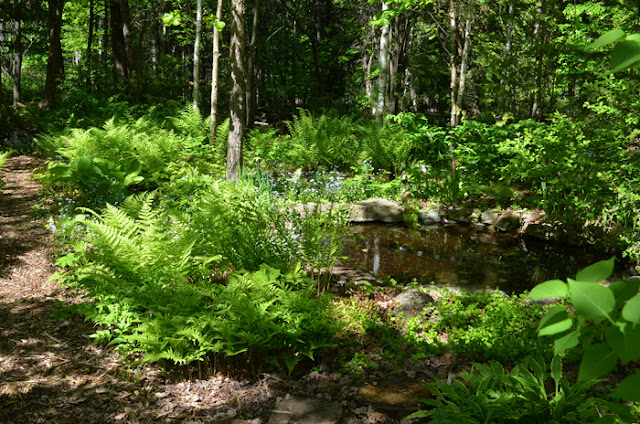 Looking back from the same spot: 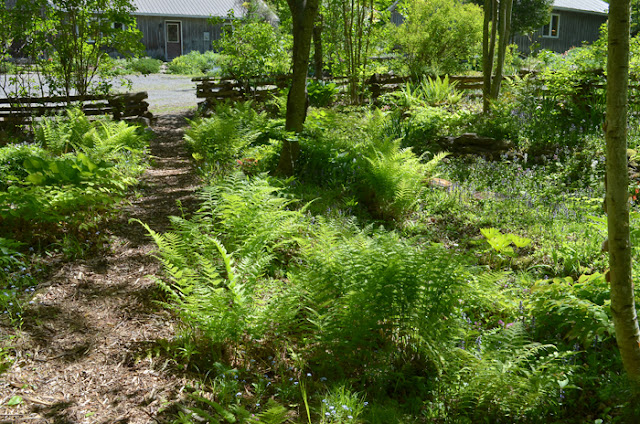 This is particularly gratifying because when I started this garden, I dreamed of a woodsy place with  an understory of ferns. I'm thrilled to think it's working! 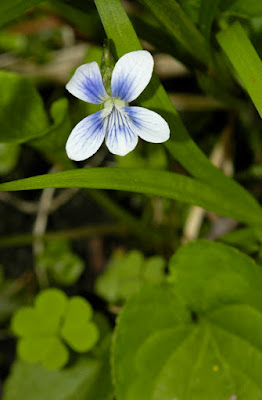 In among the ferns, and liking the same damp conditions,  Swamp Violet, Viola cucullata (what a name!), raises it's perky flowers.

It has a number of colour forms, at least here it does. Many plants have the plainer mauve/purple blooms, but some are white with a blue eye while others are pale purple or even almost a pinkish mauve. All have the characteristic blue 'eye', as you see here. A very similar violet, Le Comte's Violet, V. affinis, differs by being slightly taller and more slender, and having flowers of a softer mauve, with no 'eye' and a tuft of small hairs on the lowest petal.


Both are good garden plants, maintaining healthy foliage but quietly 'disappearing' once their day in the sun is over. 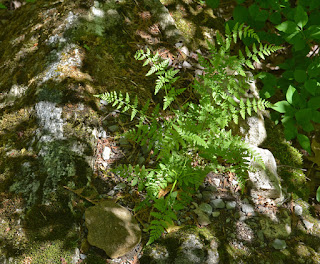 Here's a  Fragile Fern just starting to grow again. This clump is in my Sampler Garden and is a clone of a clump in my woods, which is much larger and lives entirely on top of a large flat boulder. It's been there for many years, and seems to be thriving. So I winkled a tiny piece off and brought it home and planted it on top of a similar chunk of rock in the garden. This is it's third year, and it seems quite happy.

No soil to speak of, a puddle when it rains and then drought when the puddle dries up.

And they call it 'fragile'.


The Interrupted Ferns near the marsh are showing their fertile leaflets. This fern, instead of having its sori on the undersides if the fronds, has them as specialized leaflets partway up the stipes, that is, interrupting the sterile pinnae. This is one of my largest ferns, reaching 6' at maturity. 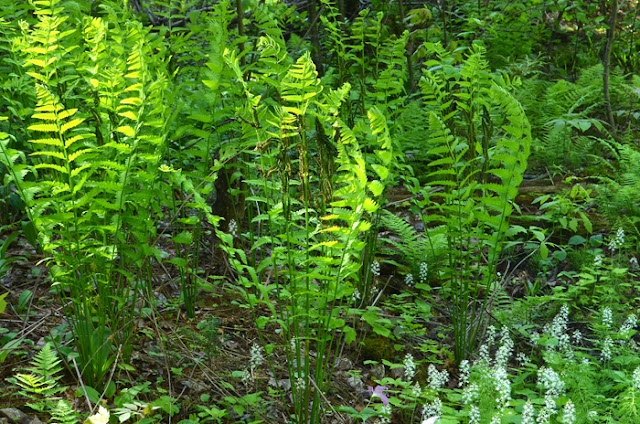 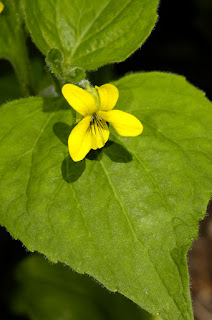 Viola pubescens has charming yellow flowers. It self-seeds all around my garden and I just leave it alone. Yellow Violet goes dormant in the summer so it doesn't take much real estate!

There are two forms of this violet: one is fairly 'furry' all over, and the other, V. pubescens scabriuscula, is smooth all over. It's particularly obvious on the seed pods.  I only have one plant of the smooth form and it's not spreading. 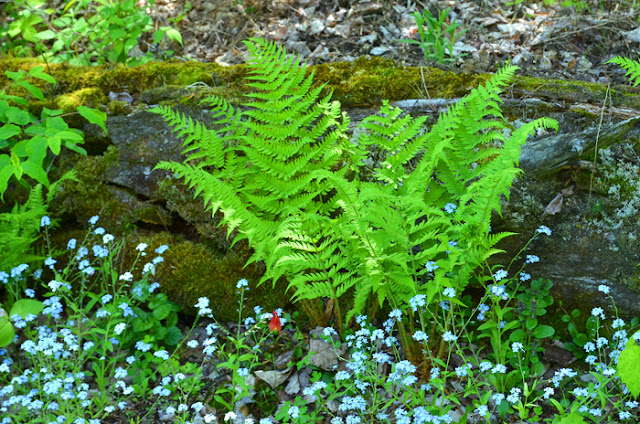 Back in the rock garden, the Marginal Wood Ferns are bright-eyed and bushy-tailed. A robust fern, it likes rocks, survives drought, tolerates a lot of sun, and stays healthy looking all summer. What's not to like?

Now, feel like a challenge (or two)? Can you identify the three fiddleheads below? 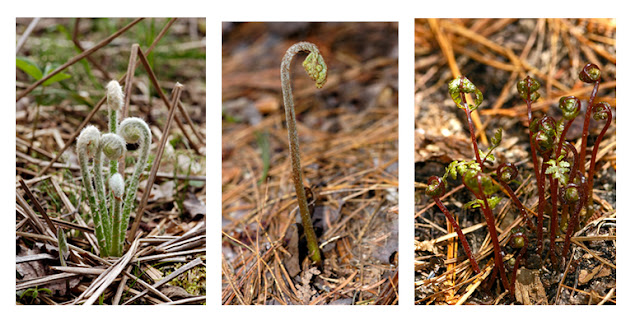 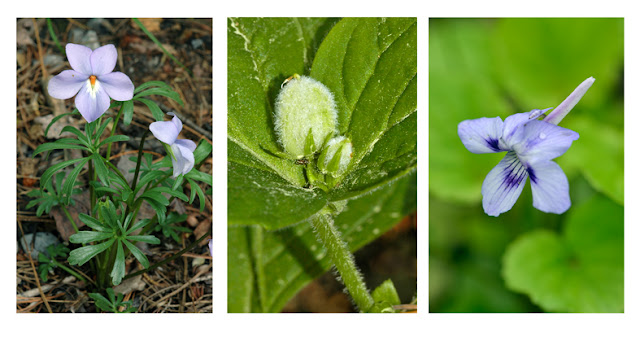 Both of these little quizzes are quite challenging! Give yourself one point for each one you know, and if you send me a comment with the answers, I'll select one person to win  a framed photo of one of my violets!