My husband said it this morning: 'Where's winter?' he asked.

Good question. It's the middle of December and it's like early November out there. Practically no snow, no frost. Just drear, drear, dreary wet grey woods, soggy raspberry canes, dripping branches and ferns flat on the ground looking bedraggled. One thing, you can sure see the evergreen ones!

Kip and I went for a walk just now to see if we could see anything worth photographing. After half an hour we both agreed the answer was 'no' and we came back in. Here's Kip looking damp: 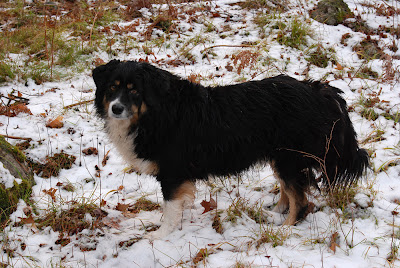 Notice his fine eyebrows! When he was a wee pup I chose him because I liked his brown eyebrows.

We did admire some mosses, though. I love those 'moss balls'. These are mosses that have the acrocarpous (upright, clustered) growth form. Here's one: 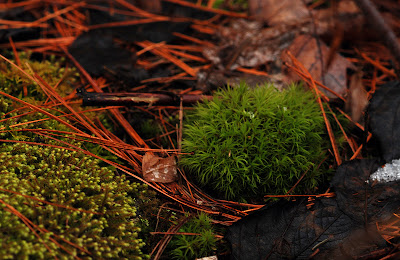 Here's a moss that has the other growth form, that is, creeping or sprawling, or pleurocarpous: 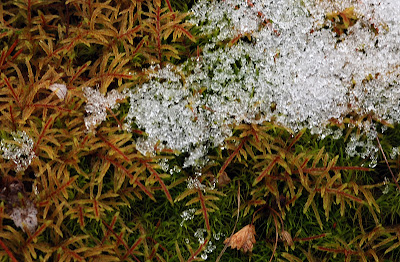 We did see a curious fungus. It was only about 3" high and at first glance looked like a patch of scales from a pine cone nibbled apart by a squirrel. Each one is flat, with an outline like a lozenge or tongue, and with the bottom sides of the lozenge curled in to create a sort of tube. I'm sorry the picture isn't clearer, but it really was dark out there! 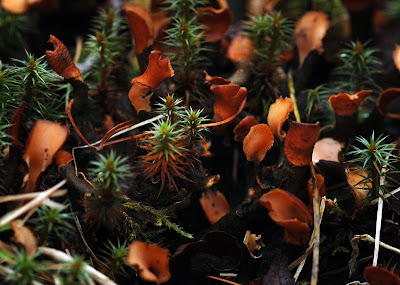 Tomorrow is supposed to warm..... if this keeps up I'll have to do some garden work!
Posted by Lis at 1:07 PM 2 comments:

There's just something about paths! Is anything more satisfying than making a new path.... suddenly new areas are accessible, new plants become visible, new ideas develop in the gardener's mind.

I've been working on my trails the last couple of weeks. There was plenty of other work I should have been doing but I've been itching to work on my trails all summer, and now with the cooler weather I've gotten right into it.  I've been chopping, snipping and clearing like a path maniac. You can now walk all around my property without having to push through thick stands of young Balsam Firs or climb over (or through!) fallen trees. Not that it is a walk in park, mind. I'm a firm believer in following the path of least resistance when it comes to paths through the woods, so my trails are rather twisty and winding, and have the occasional large log to leap over or leaning tree to duck under. Not for the faint of heart perhaps, but good for the walker's fitness!

One small area I found as I was scouting a way through for a cross path is on top of the rock ridge, sloping gently towards the north, and bare except for wonderful mosses, lichens, and small, first-year rosettes of Rock Harlequin, Corydalis sempervirens. This is a biennial, forming the small rosette one year, and growing tall and blooming the next. It likes dry rocky places, and while the flowers are a bit 'meh', the blue-green leaves are gorgeous. Here's a closeup of a couple of plants in the moss: 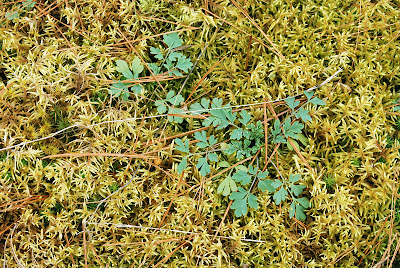 You can see why I wanted my trail to go near that. It's going to be a very neat spot in the spring! Actually, it's pretty neat already. 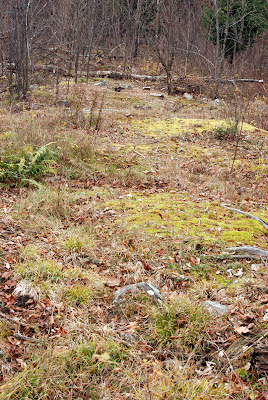 I don't want to walk on the mosses and lichens, so I placed small rocks along the left and across the back of the area shown in the picture to remind myself where to walk. Just at the top of the picture you can see one of the huge Pines that went over in the 'not-tornado' of (I think) 1997. The weather people called it a 'micro-burst', but it had a lot in common with a mini-tornado. About 30 huge White Pines were blown over, making one heck of a swath of deadfall. I still can't easily get through there, but Kip just walks down one tree to the next to the next and leaps off when he gets where he wants to go. I think he's tickled that I can't follow him!

Making new trails allows me to see more of what is growing. I found a nice patch of Dewdrop, Dalibarda repens which I'll photograph in the Spring, a fruiting patch of Spinulum annotinum, Bristly Clubmoss, a small Christmas Fern, Polystichum acrostichoides, and a patch of Northern Ground Cedar, Diphasiastrum complanatum. I have acres of it's cousin, D. digitatum, but only (so far) this one patch of this one. I knew it had to be here, but couldn't find it anywhere. Ha, it was there all along, just hiding! 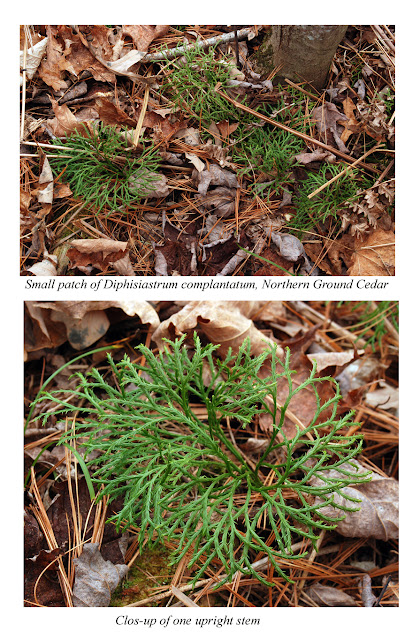 Compare it to D. digitatum: 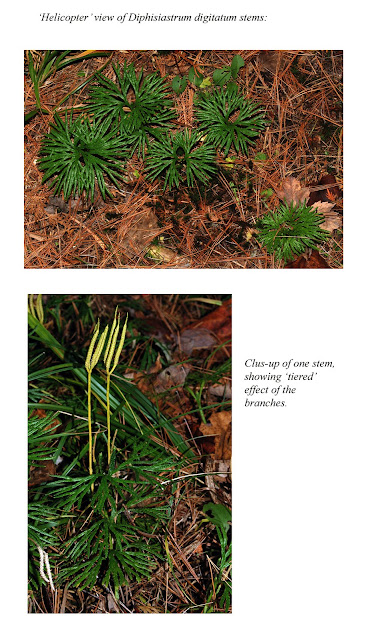 Given that snow is in the air tonight, I've finished my trails just in time!
Posted by Lis at 2:16 PM No comments: