Suddenly, everything is alive! Sunday night we had a torrential rainstorm, and the next morning there were signs of life everywhere. 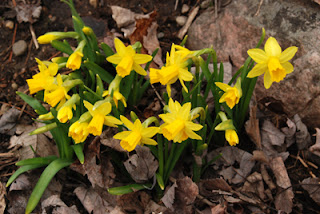 One of my favourite little daffodils, Tete-a-tete, with its two blooms on each 4" stalk, went from tiny green nubs showing to full bloom, literally overnight. 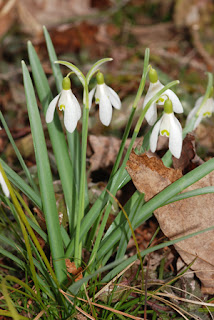 Snowdrops appeared all over the Sampler Garden, pushing up through the leaves and grasses. There are two species of them there - the flowers look exactly alike but the leaves of one are greener and wider than the other.

One of these days I'll do some research and figure out which is which species. They were both sold as Galanthus nivalis, but obviously at least one is wrong. 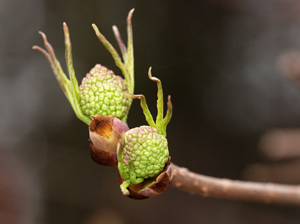 The Elder bushes were suddenly covered with their improbable flower and leaf buds. They look sort of prehistoric, as though they are going to develop into something really scary..... come to think of it, Elderberries are kind of scary. They spread like the dickens and the bushes are super brittle. The birds love the berries, though. 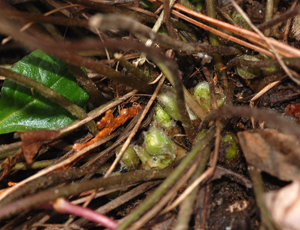 The Hepaticas (both Hepatica americana and H. acutiloba) have fuzzy buds tucked down at the bases of the leaves and I expect the flowers are only a few days away. When Spring is late the plants grow faster to compensate. Too bad the gardener can't move faster as well! So much to be done, and all of it at once. I spent several hours today gently removing leaves from the fern beds and part of the rock garden. They'll become mulch once I know where the plants are and can tuck them in around them. Right now a lot of things aren't visible yet. 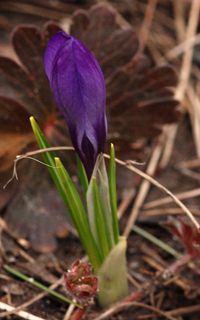 And the first crocus! This is Ruby Giant (which is neither ruby-coloured not giant but gorgeous anyway) and it looks a bit forlorn surrounded by the mud the rainstorm washed down around it. The Geranium behind it is almost completely buried. I tried to dig it out but it was still so wet I figured it would be better to wait a bit and not trample the rest of the crocuses.