The Ups and Downs of a Gardening Day

I'm too tired to talk!

Started early to weed a small area in the Hillside Garden. Last summer's drought was so bad I lost heart and, sometime in July, quit weeding entirely. In fact, I quit even looking at the garden. So the crabgrass got happy and took over a patch about 15' by 20' in the middle of the border.

Practically as soon as I got started I broke the new garden fork I bought yesterday. Grrrrr. It's going back - it should not have broken. All I was doing was digging up grass; I wasn't even digging up rocks. I had to get the old bent fork back out of the garbage and go on with it, but felt I deserved a short walk-around first. 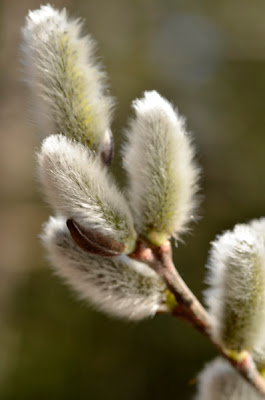 Took a look at the Pussy Willow bush in the Sand Hill
Garden. The kitties were gorgeous today. So soft and large.... silver in the sunlight.


This bush came up on its own and in a good place, but
I have to keep after it to make sure it doesn't turn into
a 40' tall tree!


Then the phone rang (inside my bucket where I keep it
so I don't lose it) and dang, a customer wants to come and
buy a gift for her daughter. Sure, I'll be home today, come
on out. 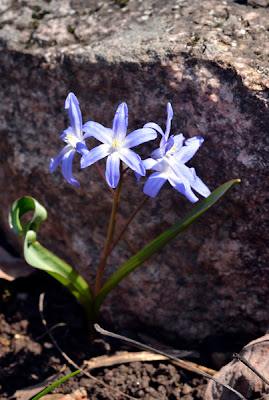 Also in the sand garden, a beautiful blue
Glory-of-the-snow blooming in front of a
chunk of granite.

Guess the squirrels missed one....bulb, I mean,
not granite chunk. 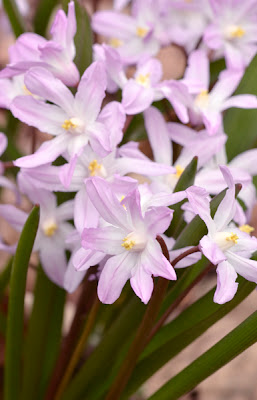 There was a nice patch of it's pink cousin in the Sampler
Garden. For some reason, this one never gets eaten. From
a few bulbs the patch has grown to some dozens now.

I'm afraid to step anywhere in the Sampler. It is my
woodland garden, and the leaves are still covering just
about everything. Trilliums are coming up, looking quite
comical with caps of brown leaves tilted on their heads.

That so-called pond really needs work. I've decided to
get rid of it and changed my mind about six times already
and it is bugging me. Next week, a decision MUST be
made. 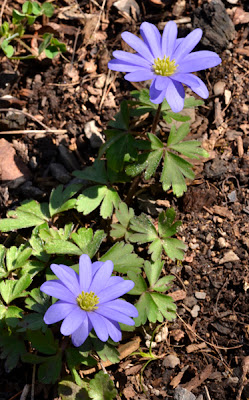 Digging out crabgrass again,  I got to thinking, so
many of our worst weeds are imports from Europe.

Where does Europe get its weeds?

Down at the edge of the Rockery the little pot of
Anemone blanda 'enem' (what a name, who came up
with this one?) made it through the winter.

I didn't really expect it to survive. A. blanda is barely hardy
here. This one is tucked into a sun pocket in the rocks,
maybe that will help. 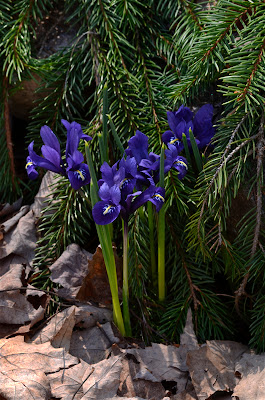 She is nice enough and is happy to select a
large platter with a sunflower on it. Her husband, however,
needs work. First thing out of his mouth, he tells me he 'hates
gardening'. Alright, lots of people do, but does he have
to tell me three times?

Ah, never mind. For sheer purpleness of being, nothing can
beat Iris reticulata. This small clump is pushing up from
under a prostrate white Spruce.

This Spruce survived the drought, most of the others
didn't. On the other hand, it may need to move. It is growing
across my path and the spot it is in doesn't do it justice. It
deserves a starring role. Must give this some thought....

My favorite little Daffodil, 'Tete-a-tete', so-called because every stem has two flowers on it, is blooming everywhere. I wanted to show you 'Rip van Winkle', but I couldn't find him; guess he is still asleep. 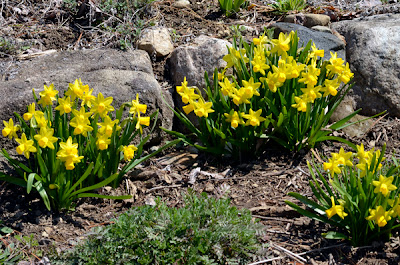 Tete-a-tete seeds itself around. You can move the clumps around anytime you find them, they never even
slow down.

Which is more than you can say for crabgrass. It neither sleeps nor slows ....

But I got the spot done, and never mind that I feel wrecked, it was a Grand Day in the Garden!
Posted by Lis at 6:42 PM