Aren't garden successes wonderful? You feel so good when one happens. And today I have two of them to report!

The first involves a peony plant which has gotten large and bushy over the years, but has never bloomed. It is one of the fern-leaved ones and it was a gift so I don't know it's name or ancestry, but I have been waiting impatiently for it to bloom and it hasn't. Last fall I remembered having read something about peonies not liking more than an inch or two of soil over the resting buds and I carefully brushed away some of the soil around it's stems.

And today I saw that it has many fat red buds! Ah, success!

The other success I discovered today is even more exciting. I've been trying for a long time to get a patch of Fringed Polygala, Polygala paucifolia, established in my woodland garden. I've had seeds which did not germinate.... I've had seeds which germinated and did not become seedlings..... I've had seedlings that did not become plants..... in other words, I was failing with them all along the line. And yet they grow in masses only a mile or two away. Last summer I got some cuttings from a neighbour. I put them in sand and kept them moist and cool (as much as I could in that awful drought summer) and by fall there did seem to be roots on one of them. I planted it in my mini-bog near the marsh, figuring it wouldn't grow anyway and what would I do with it all winter.

Imagine my delight this morning to see a nice tidy plant, with two flower buds! Here it is, on the left. The picture on the right, just to show you what the flower looks like when it is open, was taken near the White Lake Fen, another place where it grows in its numbers. 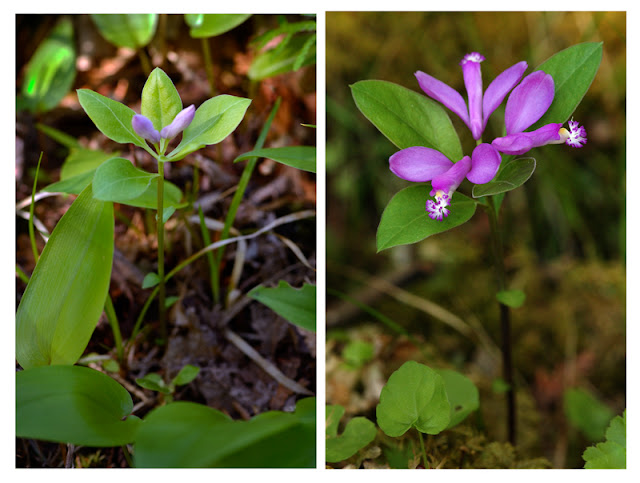 P. paucifolia is a curious plant, really. It grows in the moss in boggy areas, and in bone-dry conditions under tall white pines. I've seen it in full sun, and in heavy shade.  It spreads underground to make large patches, and is considered a shrub by some authorities. It occasionally has above-ground seeds, which look like a flake of cayenne pepper, but more often has one or two seeds that develop underground right on the stem or rhizome. These underground, or cleistogamous, flowers, never open, but usually self-fertilize and produce seeds. They are pretty hard to find, though, involving crawling along the ground on one's stomach scraping soil (or bog muck) away from the stems.  The whole plant is only about 6" high, and the flowers are most curious. They look a bit like orchids, although some people see a resemblance to small birds or even angels. Whatever, their curious shape and bright colour make them one of my favourite wildflowers.

Is one small plant too soon to claim success? No, I'm feeling optimistic today!
Posted by Lis at 5:57 PM