I was musing about luck as I worked in the garden yesterday. It was a beautiful day, sunny but cool with a small breeze to keep the bugs down. Since I'd worked hard at my pottery all the previous week, I decided to take the whole day off and just garden. It was what I call a Freedom Day. Free to do what I feel like, and no pesky to-do list! 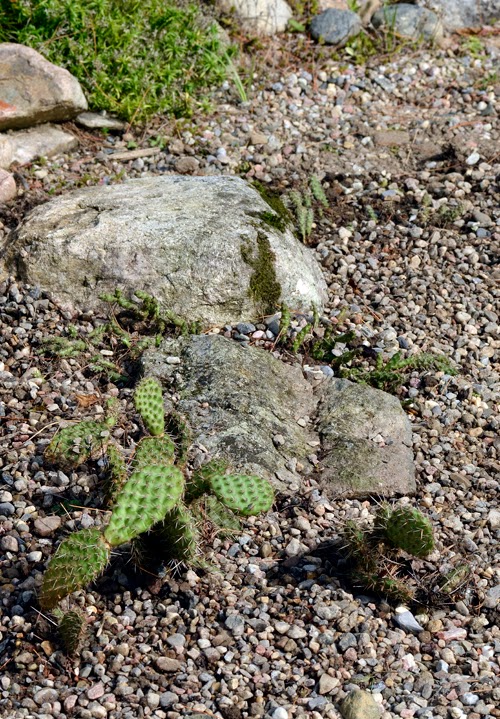 The first thing I felt like doing was finishing moving a few cactii. Some years ago I bought eight or nine different varieties of Opuntia from Gardens North. They did fairly well in the sandy area behind the Studio and while they didn't get very big, several of them did bloom. They didn't really impress me - I liked the architectural quality of their pads, and was tickled to think we had hardy native cactii, but as a garden design element they were a big ho-hum. It didn't help that they were hidden by some ornamental grasses. Anyway, I noticed this year that they were looking a bit punk and realized that not only were the nearby pines dropping needles all over them, but also they were shading them. Monday I decided to move the cactii and while I'm not totally happy about their new location, I think they'll do much better there. Full sun, excellent drainage (hardly any soil, really, and that on top of sloped bedrock) and plenty of air.

Of course, when I put the spade under to lift them, they did what Opuntias do best, that is, they became many Opuntias. I just planted all the clumps together as they were in the first place. With luck they should be more impressive next year. 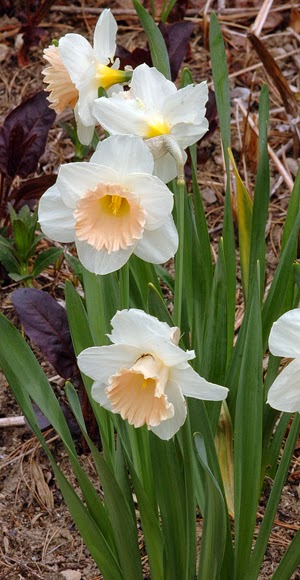 Speaking of next year, I was lucky about a certain Daffodil. Three years ago I moved a path and the bulbs of a certain daffodil were in the way. I dug them up and planted them (temporarily of course) in the back of the vegetable plot. They did very well there, tripling in number and blooming better than ever. Last August I dug them up and dried them off and put them in the garage for re-planting in the fall. In April I was poking around looking for something else and guess what. Nicely frozen and then dried daffodil bulbs. Arrggghhhh!

Not sure of the name anymore, but 'Avalon' comes to mind. It is not a 'perfect' or 'show' daff, but the soft pastel peach trumpet is pretty. It's sturdy, too, and shows up well in the early garden.

I was most annoyed with myself. I don't like waste and I don't like it when I do something that dumb and beside, I was sorry to lose my pretty pink Daff.

To my delight, it seems I hadn't dug up every bulb, and this spring there were two flowers. Such luck! I dug them up and re-planted them yesterday, not forgetting them again! 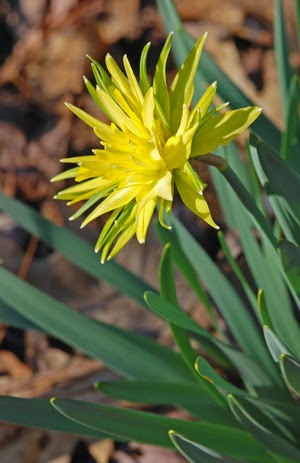 (By the way, if you haven't ordered yourself some new spring bulbs yet, there is still time..... Botanus  is a BC company with a nice selection. They have some of the smaller bulbs too, which are always fun.) You could get a few bulbs of narcissus Rip van Winkle', for example.

Rippy, unlike his namesake, is always up early. One of the first Narcissus to bloom. It opens green and brightens to a chrome yellow. It's small, only a foot high, and I'm sure you can find an inch or two of space for a bulb or two.

You can point him out to visitors, and they'll look at you strangely when they think you won't notice, and you can laugh inside. 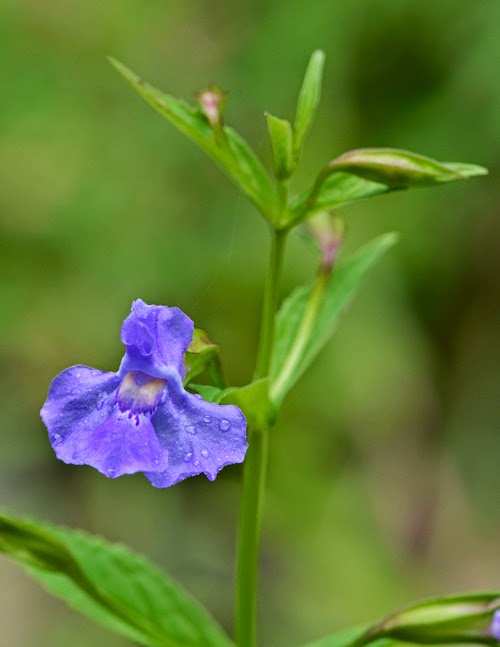 Growing things from seed is always fun, and often the only way to get a certain plant. In 2011 I brought a few seeds of Mimulus ringens, square-stemmed Monkey Flower, back from a hike. Two of them came up, and in July of 2012 they bloomed in their pot. Hmmm, I thought, how nice, a couple of plants of that Monkey Flower, I must find them a good damp spot.

Did I get around to planting them? No, of course not. It was  August before I looked for them and then they seemed to be gone. Rats. A native species I didn't have and here I'd lost it again.

Well. This spring there was one sprout of something in a little plastic lid under the bench where I keep the fern babies. It looked sort of like Purple Loosestrife which comes up everywhere but not quite. The way the leaves attached to the stem seemed different. Also, Purple Loosestrife stems aren't square. To my delight, it was a plant of Monkey Flower!


And I discovered some new luck yesterday, too.One of our native thistles (did you know that Canada Thistle isn't native?) is Swamp Thistle, cirsium muticum. I didn't realize it was a biennial and neglected to save seeds. Not one plant last year, and I missed it because it is quite a dramatic plant and looked well behind some pale daylilies. All thistles are dramatic, but this one is both dramatic and graceful. It's supposedly common in our swamps, but I have never seen it in the wild. I was given the seeds and told the plant could get 10' tall but that was all. 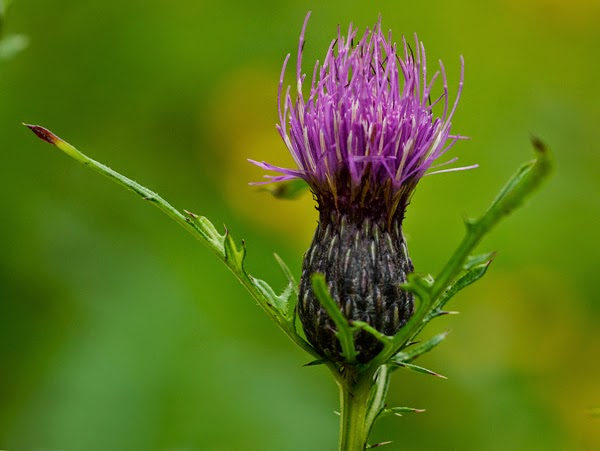 Each plant has many flowers, and they form an elegant candelabra shape. Mine only got 6' high, but were impressive.

So today I was delighted to find one plant blooming at the edge of a patch of Jerusalem Artichoke. The 'chokes' are a pest and will have to come out someday soon, but I'm so glad a seed of Swamp Thistle found a home there.

Now that is gardening luck!