In my last post I promised to take a look at some of the dry-land asters, but I'm too restless today and will postpone that one to maybe next week. Today I'm going to wander around in my patch and look at whatever catches my eye. Some days just aren't meant to be focused, some days are meant for ramblin'. 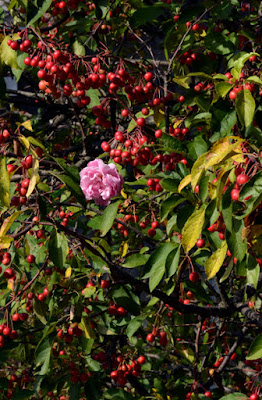 The Herb Garden is looking good. We had a little rain, and the plants have all responded by perking up and looking green again. I'm surprised by the roses - they seem to have all put out some new and very tall stems, straight up in the air (except Iceberg, of course, which sends it long shoots out horizontally to catch the gardener's ankles), with clusters of flowers at the tops. This one, Mary Rose, went up into the Crabapple tree. It looks a bit comical, one pink rose surrounded by a heavy crop of red crabapples, but I guess it beats the 'lollipop' look of the other bushes with their flowers waving in the air six feet above the rest of the bush.


The red thorns on the nameless one beside Iceberg are amazing.

When I started the garden here I decided, firmly and definitely, not to have either Roses or Bearded Iris. I have 23 Rose bushes and at least that many Iris. 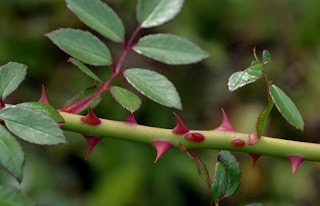 Moving over to the edge of the Rockery I nearly stubbed my toe on a plant in a pot. I had purchased a nice bushy plant of a Persicaria, a cultivar named 'Golden Arrow', which has nice yellow-green leaves and small red flowers. It is supposed to stay under 18". I carried the plant around for a bit, mentally testing it in a number of places... then got the spade and dug a hole and got some compost and improved the hole and stuck the plant in and tamped it down and got some water and watered it, and stepped back, and, drum roll please, it was immediately obvious it was in the right place! 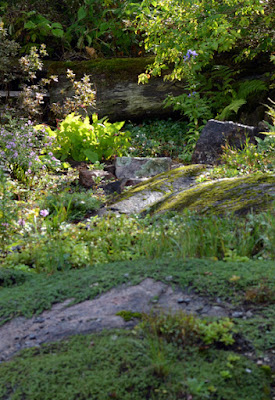 It's the round yellowy clump just above the middle in this not very good picture. It fits just right and should look even better next year when it expands a bit.

Funny how sometimes you get it right. I suppose it's also funny how often you don't, but maybe that isn't actually funny.

Planting this one plant did mean digging out about a pailful of Ajugas, something I consider a bonus. It would have been easier with a garden fork, but I don't have one right now. Broke mine the other day trying to lever out a largish rock. I seem to keep breaking my garden forks in the fall, when  I can't buy a new one because the stores don't carry them in the fall. 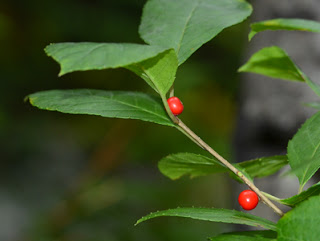 My Winterberry bush has two berries this year. Since this is a 100% increase over last year, I am not going to get discouraged. 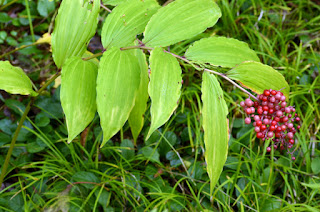 The stems of False Solomon's Seal, now to be known as a Maianthemum, are elegantly arched, holding their messy heads of berries close to the ground. The squirrels and chippies always eat them, but they seem to wait for them to ripen. It's curious how the berries ripen at different rates. 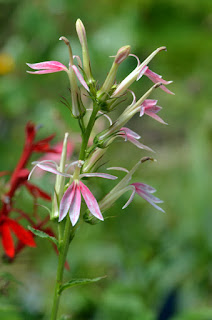 Several of the Cardinal Flowers bloomed pink or pink-and-white. I grew them from seeds collected near the Marsh and planted them around the little pond in the Sampler Garden. They need more sun and bloomed quite late.

Several people got small plants of this from me, and I fear they will have been disappointed. I like the pink ones, but if you want red, well, oops. 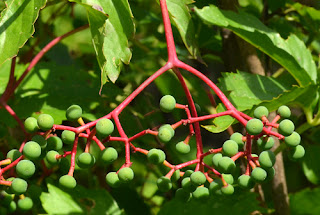 The stems on the Virginia Creeper are beautifully red. Here the berries are still green, but in a few days they will be dark purplish blue. Virginia Creepers don't bloom (and have berries) until they reach a certain age, then they sometimes fruit quite prolifically. This has been a good year for them, maybe they like drought? 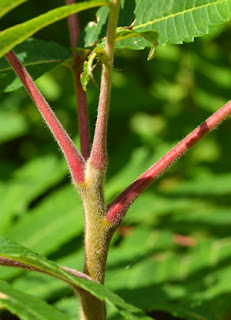 Red stems on the Sumachs. I like their furriness, but hate their spready-ness. Sumachs have every intention, I do believe, of taking over the world. Sort of like Ajugas.

I wonder what would happen if you planted a patch with all the bad spreaders - Sumach, Ajuga, Geranium sanguineum, Goldenrod and so on- would they achieve a stable state, a sort of 'detente cordiale', or would they annihilate themselves and then get replaced by something kind and gentle like maybe a race of Violets? Not that I'm going to try it, I really don't think the Violets are very likely. 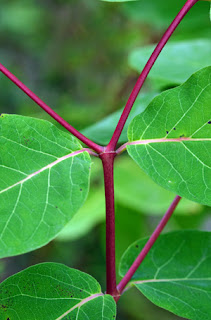 Lovely stems on the Apocynums. The leaves turn a bright yellow, too, giving quite a fine effect a bit later on. This is another candidate for the field of spreaders.


A lone plant of Agastache foeniculum, Anise Hyssop, has snuck in among a patch of Heart-leaved Aster. This Agastache has a wonderful licorice scent and makes great tea. Just put a few leaves in a pot, with maybe a few lemon-scented leaves like Lemon Verbena or Lemon Balm, and pour on boiling water. Refreshing to drink and it will remind you why you have a herb garden. Not that the Agastache will stay in the garden, but you'll find it somewhere nearby. 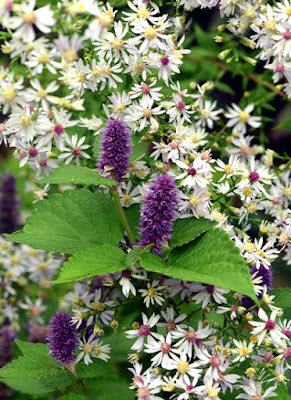 These two are tucked in under the skirts of a (also very spreadish) shrub Rose. I'm not sure which Rose this is, it was sold as R. caroliniana and it might be but I haven't checked. The flowers on this rose are single and lovely (what rose isn't?) but it's real beauty is its hips. 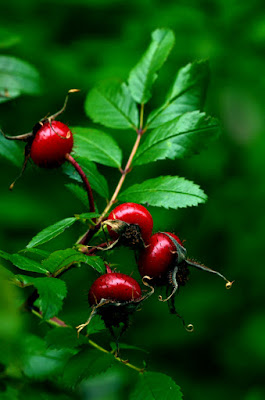 That brings me back to the front door... it's been a fine ramble!