Today I pruned my roses.

You may reasonably wonder why I should be doing that in January. My garden rejoices in the presence of, I think, 25 rose bushes. Some of these are bush roses, such as Fru Dagmar Hartrup and Harrison's Peach, some are species such as R. glauca, (formerly R. rubrifolia), and R. woodsia the native Smooth Rose, but most of the others are David Austin roses. I find them quite hardy here, although in a winters where the deep cold arrives before the deep snow, they may die back to only a few inches above the graft. Most years they do fine.

This year the roses stayed green and even put up the occasional flower well into December. Some of the later canes reached inspiring heights. Mary Rose went up into the crabapple tree and bloomed between clusters of deep red crabapples. An attractive colour combination, but a somewhat absurd sight nonetheless. Gertrude Jekyll, always an original thinker, headed up into the cedar clump nearby and thrust her pale pink double blooms out from between the green sprays at about the 6' level. For once, I had to reach up to sniff.

Which is one of the fine things about the David Austins - their fragrance. Most smell like the roses of old, that is, sweet and fruity. Very few of the modern tea roses have much in the way of fragrance, and if they do it tends to be a muddle of cheap colognes and aftershaves. The shrub roses rarely have any scent, and most of the so-called Explorer roses, such as John Cabot and Champlain, have no scent at all.

There is one of the Explorers that I like very much. It has clusters of small dark red roses, a very lovely rich colour, and a habit of blooming for weeks. It came labelled Heritage but of course it isn't. It might be Champlain but I have no record of having purchased that.  Seafoam, also not an Austin, has no scent but its small white suffused with pale rose blooms, in graceful clusters, come all summer long. It is one of the last to bloom. In fact, some of the canes I just cut back had (frozen) buds on them. Seafoam, at least the one I have, has a very bad habit of growing horizontally. This leads to lots of bloom, but also seriously scratched ankles. I did cut it back severely a few years ago, but it didn't take kindly to this treatment and sulked for a long time. Only this past summer has it started to forgive me and gone back to its usual rampaging approach to life. For a long time, I thought this rose was Iceberg, but some research has shown me that is wrong too, and it must be Seafoam, which is what I thought before someone convinced me it was really Iceberg. Sigh, and big Note To Self, I really must make good permanent labels for my rose bushes.

Normally, I would have trimmed the roses back in November, but this year it was so warm I was afraid it would encourage them into new growth, so I left them. But they looked fairly silly, not to mention reproachful, sticking up above the deep snow. 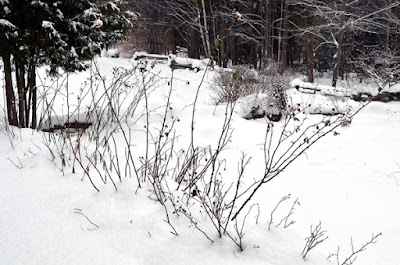 Not wanting to fill my boots with snow, I got out on my snowshoes and trimmed them all back to just above the snow. Other than the canes getting caught in my wool coat, it was pretty easy. One cane fell rather far from where I was standing and tumbled over the low fence and I thought, 'darn, now I have to walk all the way around' in true post-holiday laziness, but it turned out to be quite possible to use another long cane to fish it back within reach.

First time I ever trimmed roses on snowshoes.