Leaves are starting to show red here and there, especially some of the show-off Sumachs, there is a nip of frost in the air, and the season of garden renovations is in full swing.

There's something about August that exposes all your gardening weaknesses. You see them, but it is too hot to do anything about them. You maybe make an entry in some notebook: must move that daylily...... or you brush by some overgrown thing and give it the 'just wait until I get my secateurs' glare, but you don't actually do anything. It's too hot, the garden is too dry, and that glass of chilled white wine is calling.

But September, ah September. It is cooler. The border revives. Asters bloom. A tomato finally ripens. Birds check out the feeders, notebooks in hand, with an eye to winter patronage. Out come the secateurs, the garden fork, the spade, and, in my garden, the crowbar. To work!

So far, I've done bits in a number of different areas. It would make more sense to do everything in one area and then move on, I know, but I can explain. I started in the Crabapple garden, where I removed a 100-sq-ft patch of Adenophora 'Elizabeth'. Nice flowers, nice leaves, too bad about the garden manners. It was taking over the whole area, and I was not, simply not, moving three large Peonies. I intend to reduce the Japanese anemones too, but will wait until they finish blooming. For some reason they all fell over this year, but then the ends turned up and now the flowers are all facing forward nicely at about the 2' level. Odd, but looks fine.

Then I putzed around in the Rock Garden several afternoons, planting the stuff I never got around to planting in the spring. Doesn't every gardener have pots that sit around for months waiting to be planted? Of course I couldn't just stick them in the ground, I had to dig new places for them, move some rocks, carry buckets of pea gravel over for mulch, you know the drill. It's fun to make new garden! A new plant is the best excuse to indulge! My tiny bog is doing fine and I had to sit on the rock above it and admire it. So far no weeds, and the moss is green. The steps down to the lower part of the rock garden were overgrown with Viola labradorica, the Dog Violet (what a name for a flower!) and I dug those out. Then I got sidetracked a bit and spent a couple of afternoons clearing more trail in the woods. I basically hacked a path through the patch of young maples and hornbeams behind the Rock Garden. Used my trusty secateurs to do it, too. Who needs an axe or a saw if she has secateurs? But I ran into a fallen spruce, spiky branches sticking straight up ready to scratch or poke anyone who tries to climb over it, so I had to back off on that project. October is for things that need axes and saws.

Then I cleared around my Goldenrod and Aster test beds, put down landscape fabric around them, and covered the fabric with pea gravel. Looks like a million bucks and took all of an hour to do. Where the fabric is now will be paths later; these little beds are the pioneers in the rough patch at the far end of the rock garden. I hadn't planned to extend the garden that far, but a certain bulldozer pushed a certain pile of crushed rock too far and .... never mind, it's a great spot for some of the 'wilder' plants.

In between, I've been attacking the Hillside Garden, which needs major work. It's become a difficult area. The soil is clay, and I haven't been able to mulch it the last couple of years. When it is dry, and this summer has been very dry, I can hardly get the fork in, let alone up-end any perennials. It rained a bit last night, and I got some Goldenrods dug out (too many of them) and got a start on removing the Geranium Sanguineum. (Some call it Bloody Cranebill, and that's not an adjective.) Now there's a thug for you. Spreads like the dickens, and roots to China. And always only has a few flowers. One plant, surrounded by rocks and gravel, is a fine thing, but a patch of it is a boring mess.

Of course, that's only one side of renovating. The other is new planting, and that will wait for Spring. I have some ideas......

Oh, and I promised some more pictures of Fringed Gentian, so here they are: 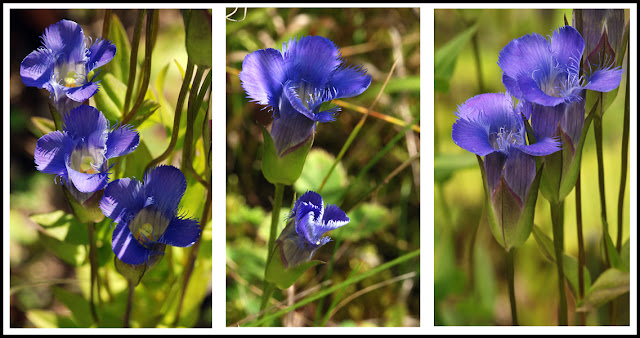 The flowers only open in the sun, but aren't they worth waiting for?
Posted by Lis at 6:46 PM