My latest one was born of necessity. The gravel walkway beside my Studio, actually between it and a short clay bank, has been impossible to keep weed-free. It is often damp, with runoff from the hill behind, and the clay is heavy and sticky. I've pulled.... I've hoed, I've even resorted to Nasty Chemicals. Nothing worked for very long.

During heavy rains water runs down the walkway on its way across the driveway and then down to the Marsh. I've made a shallow swale along the edge to channel this a bit. Still, I think the rain is washing tons of seeds down with it.

Now Horsetails, Equisetum arvense,  have come up in it.

Frustrated, I thought of landscape fabric. I had a bit, given to me by a friend who moved away, tucked in the shed. There wasn't nearly enough, but I also had a roll of house-wrap, left over from when the house was being built. It was some kind of synthetic, waterproof, sturdy, black.... well, why not, I thought. 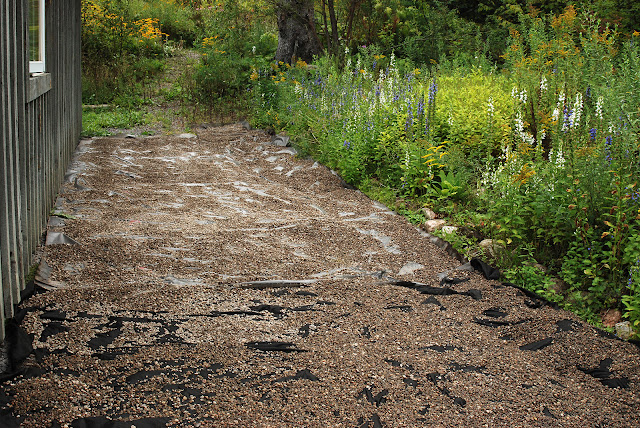 You can see there's still lots more work to be done: the path up the hill is a mess, the clay bank needs a complete overhaul, I need to put more gravel on the fabric.... but maybe now this area won't be quite so daunting.

And maybe this will be one of my more successful hare-brained schemes.
Posted by Lis at 5:30 PM