I've had a great crop of chipmunk tomatoes this year. They didn't start to ripen until past the middle of August, but once they started, there was no stopping them. I know more ways of serving tomatoes than an Italian restaurant....  What are chipmunk tomatoes? Well, the chippie that lives near the veg patch is a tomato lover, and he takes a bite out of each just when it is ripe to claim it for himself. I've been keeping an eye on the tomatoes, trying to beat him to them, but with no success. Every ripe tomato has a bite taken out. At first I didn't want to eat them, but now I just cut off the chewed bit. Ya do what ya gotta do, sometimes.

I like to keep my geraniums. By now I have a nice little collection of different colours and leaf forms. I mean pelargoniums really, but you know what I mean. Those red things you get at the nursery in the Spring and plant in pots. Ah, but there are also many shades of peach, white, different pinks, dark plum red, bright crimson..... and leaves of all kinds. I have a gorgeous oak-leaved one which gets to about 3' tall in a good summer, and a little one with bright red flowers like perfect miniature roses. Also some scented ones, and one called Mrs. Taylor which has the most beguiling deep scarlet flowers with darker spots.

Late in the Fall, just before frost in fact, I take cuttings and stick them in some pots I made. I just tidy up the cutting, jam it into the soil, water it, and put the pot on the windowsill. All but the pine-scented one always root. To see them, you wouldn't think they were cuttings at all. Most of them even bloom, and by Spring they are nice, if small, rooted geraniums. Then I move them into large pots outside. By July they fill the pots and bloom like maniacs. If I manage to keep them dead-headed they go on until frost.

I took the cuttings yesterday and brought them inside to pot up. I was too tired to do it right away (I'm in the middle of a nasty cold) so I put them in water in a blue pottery bowl. How beautiful they looked! 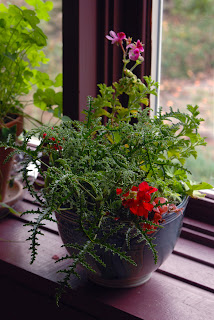 Bah, humbug. Until now, I liked that bush. It was planted behind a Mugho Pine and the Christmas colour combination appealed to my sense of humour. Today I looked at them - bright red Burning Bush, bright green Pine. All around them, brown seedheads, bare Sumachs, grey rocks.... that Bush has got to go. It was hideous! Totally out of key.

You may recall I planted a single squash plant this Spring and I wondered if I would get squash. Short answer: yes. The vine got huge, leaves 18" across, stems trailing 10', and there were 8 large acorn squash. Unfortunately, they seem to be watery and tasteless. Is this because it was a single plant, or because I watered the plant (it was a very dry summer) or was it a weird seed? Rogue squash?

I always knew you had to hill your potatoes. When I was a kid my parents made us hoe and hill the potato patch. Naturally, we resisted mightily but I can't say it actually did us any harm and it probably did the family diet some good. Anyway, when I started growing my own potatoes I knew how to plant them, how to hoe them, how to hill them.... and my potatoes were always pretty good.

This summer I ran out of time soon after the first hoeing and never got them properly hilled up. When I harvested them, each plant had one or two large potatoes and that was all. Reading an old gardening book one night, I came upon a scientific reason for hilling potatoes. Seems the tubers grow at the ends of stolons, and stolons only form if the root of the plant is deep enough in the ground. So if you don't hill them (or plant them in a trench and fill in the trench as the plants grow, same thing really), no stolons, and few potatoes.

Why is it that when you dig a 1-gal. hole to plant a 1-gal. plant, there is never enough soil to fill in around the rootball? I dug a nice hole the size and shape of the rootball of a White Spruce which had gotten much too big for its pot, and put it in, and had to go get a wheelbarrow load of topsoil to fill in around it. This seems to keep happening to me....
Posted by Lis at 5:22 PM