OK, fast forward to last Sunday. I finally got out there again, planning to work on my new path. I was delighted to see that all the ferns are alive and well, and that the other wildflowers all looked bright-eyed and bushy-tailed as well. No sign of the Clintonia, but then, it goes dormant in September. The Fletcher people had put some dead birch logs along the edge, which looked a lot better than the yellow tape we had there before!  A lot of people walk (and walk their dogs) along the various trails, and the fern area looked empty so without the tape or now logs, people would walk on the plants. 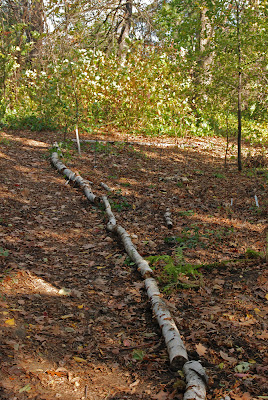 You can see the logs here. The existing path is on the left, the start of the fern area is on the right of the logs. The spot so far is about 40' by 10-15'. You can see the wonderful dappled shade cast by the huge trees which are just, as the film people like to say, 'out of shot'. What you can't see is the ferns - told you they were small!


Here are some pictures of the new path: 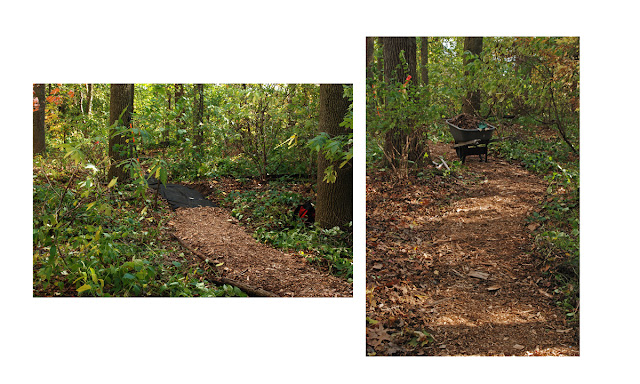 I started by clearing where I wanted the path, pulling out Vine, leveling the ground a bit with my drag hoe, moving a couple of small rocks and so on. Then I put down a double layer of permeable (cloth) landscape fabric, the kind the lasts about 3-4 years and then deteriorates to nothing, pinning it down with wire staples every couple of feet. Then I covered the fabric with a few inches of wood chips. Getting the wood chips was almost the hardest part of the job!

The hardest part of the job was talking to all the people who came by and stopped to find out what I was doing. It was fun talking to them all, but I soon found I had to stay alert as some of the questions were hard to answer. Why was I doing this?( Um, well.....)  How long before the Glade would be finished? (Um.... never?) Did squirrels, of which there were two hanging around hoping I had squirrel lunch in my backpack, eat ferns? Why had the Fletcher people mowed down the meadow? (Did you read the sign???) And so on. Quite a few people were out with kids, and they were all very interested. Anytime I felt I had answered enough questions I would ask them, with a smile, if they would like to help. It really worked with adults, who all promptly decided to continue their nature walk, but the kids were all keen to work! They were great at stomping down the wood chips.  One kid patiently picked up about a hundred acorns. Not sure what he was planning with those, but by the time he left his pants were hangin' a bit low.

Anyway, that may be it for work on the Glade this year. The weather is changing and I think snow is not far away. Not really enough warm weather left for ferns to establish before winter, so I think I 'll wait before moving more of them in. Dan (remember Dan) plans to plant a few Spinulose Wood Ferns, Dryopteris carthusiana, and some Marginal Woods, D. marginalis if he has time. Next spring, Christmas Fern, New York Fern, Silvery Glade..... lots more to come! And some more native ground covers (I snuck in some White Trillium plants already) and a concerted effort to get ahead of the Dog-strangler. I plan to approach it like a science experiment. I intend to mark about 20 plants, then each week cut down whatever growth it made that week. If I keep records, I should be able to find out how often it needs to be cut down to eventually exhaust the roots. Even grass will die if you cut it low enough often enough. At the same time I hope to cut the rest of the Vine in the Glade every couple of weeks so at least it won't seed, and to dig it out in small areas as ferns get planted. It's not a huge space, so it would be possible.

What Dan and I really need is some help! Anybody up for a challenging project? We could be the Fern Team.... I'm serious here, guys. If you are in the Ottawa area, willing to work hard for a few hours each week, and would like to join us, get in touch.
Posted by Lis at 2:51 PM