I've been busy re-working what I call my Hillside Garden. It's called that because.... well, because it is a hillside! When the house and studio were being built, the bulldozer pushed the topsoil from the foundation sites to the side and up over a large exposed granite outcropping. Men with bulldozers do these things.

Here's a picture of what it looked like last fall: 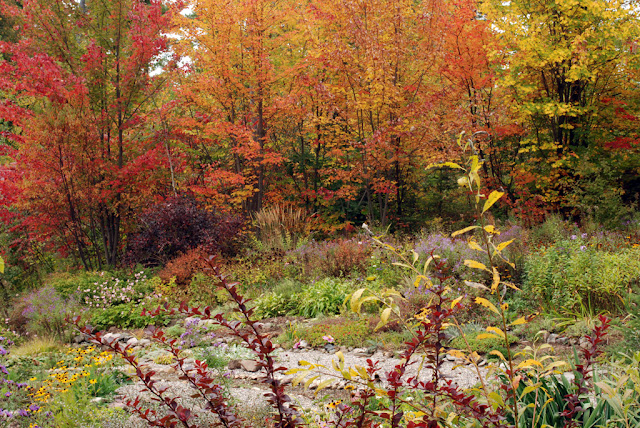 I'm actually rather pleased about that picture, simply because it shows that my garden really does merge into the surrounding woods fairly well. Of course, last summer was a dreadful drought year so the plants in the garden were all shorter and skimpier than usual, but still the basic idea of the garden was working.

But I didn't do any real weeding last year, having lost heart due to the drought, and had done very little the year before. My garden had been on a garden tour the year before, and I ran out of time for getting ready (story of my life) and ended up yanking weeds instead of digging them out. As a result, grass and other nasty stuff got seriously established. So it was really time to give the area a going over. It was rather daunting, being larger than it looks in the picture and having a lot of clay in the soil. Also it is much more on a slope than the picture shows. Maybe this picture makes it clearer: 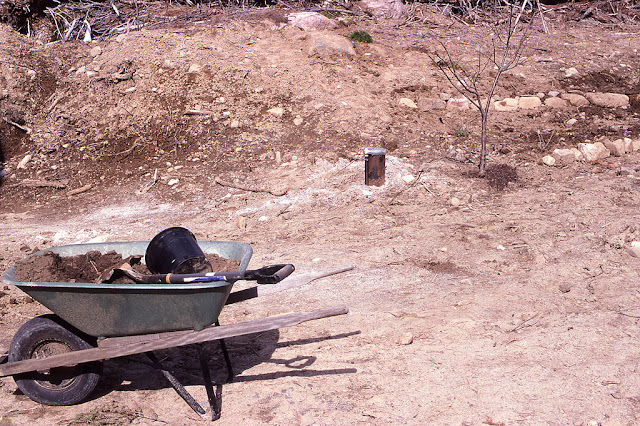 That was the year after we moved in. The picture shows about half the Hillside area.That wheelbarrow is still going, by the way. The metal thing in the middle ground is the wellhead; remember it as I have a great plan for it and will tell you about it as soon as it is done.

I finished the last bit of the digging part of the re-working yesterday. The perennials I am keeping have all been lifted, de-grassed and re-planted. Many many things that were either proving invasive, like Rudbeckia fulgida 'Goldsturm' or too inclined to seed themselves around, like Digitalis grandiflorum, or otherwise undesirable, have been pulled out and trucked to the compost heap. Things like Bearded Iris have been divided and reduced. One thing I wonder about: how did someone who decided, quite rationally, not to have Bearded Iris end up with so many? I've also added some new things like a rose-coloured Veronica, several Oriental Poppies in peach shades and some yellow Heleniums. I have searched for red Heleniums, which I left space for, but no luck. Have to get some seed, I guess. They're easy enough to grow. 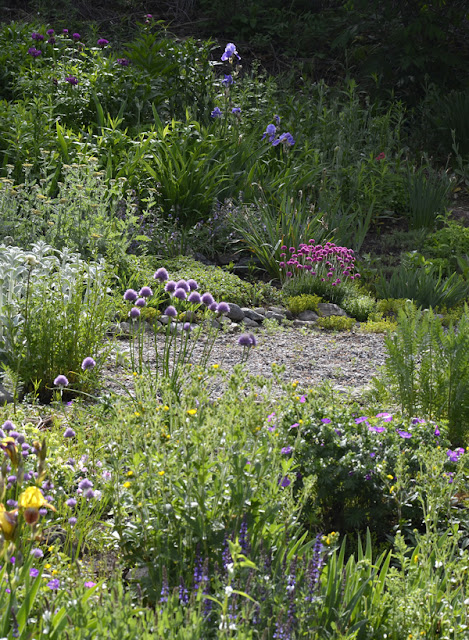 You can see, especially in the back, that there are large gaps, best thought of as Planting Opportunities, and that the foreground is still a bit of a muddle. Still some Geranium sanguineum (super-invasive and a job to dig out) to get rid off but I thought I'd do that after it blooms, and I'm not sure I'll leave those Chives. I like their shape and don't hate the colour, but they're kind of spreadacious too. Maybe some better mannered Alliums could replace them. The large open area behind them, by the way,  is deliberate. The path, which you can't see, is between the Chives and the open area, and the open, graveled, space is very restful. It sets off the terraced hillside, links this garden area to the others here, and acknowledges that this is really all a rock garden. Best idea I've had so far, putting pea gravel along the Hillside path.

It was quite a job, but in the end I enjoyed it. The weather really helped, lots of soft rain and fairly cool temperatures. Most of the plants I lifted never even wilted. Actually, even the stuff on the compost heap didn't wilt.....