Someone once said that the Holy Roman Empire was neither Holy, nor Roman nor an Empire, and we can say theWild Blue Iris is neither very Wild, nor always Blue. 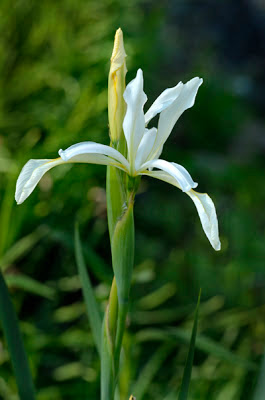 Here it is in its white form. It surprised me in the garden the other day. I had gotten some seeds for Iris versicolor, alba form, from a seed exchange, I forget which one, and had grown some plants. Then the first ones bloomed, all blue..... I gave most of them away and chalked another one up to experience. I didn't really want to try to get seeds from the blue ones and grow them and see if any white ones appeared. A few plants I kept and put in the Rockery and kind of forgot about.

So it was a bit of a thrill to see this!

There was only one flowering stem, but it had 3 buds and they all opened. The flower seems a bit 'skinny', but otherwise a regular I. versicolor. Next year's flowers may be more substantial; it isn't unusual for a plant's first flowers to be a bit small. 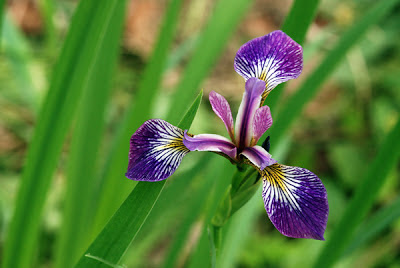 Then there is the 'red' form, called 'Kermesina'. It seems to come true from seed. All the plants I got bloomed purple-red like this.

But my favourite is still the plain, common blue one. It is an adaptable beast and will do quite well in a variety of situations. In the wild you may find it on the shores of rivers or lakes, or in a bog. In the garden, it will cope with typical flower-border conditions. I know a field near my place that has a few inches of soil over a flat limestone pavement and it blooms there by the hundreds every year. 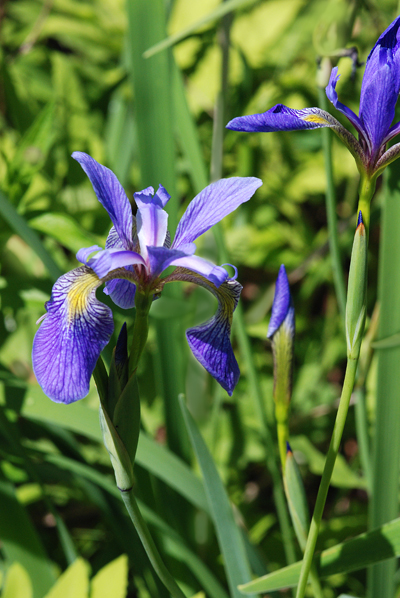 But seeing this Iris in a bog, as I did at the White Lake Fen, is a revelation.

The leaves were a full 3' high, the flower stalks were a good 12" above the leaves, and the flowers were twice the size of the ones I have at home. The picture above was taken near the Fen. It was a very sunny day and the image is a bit contrasty, but you can see the vigour of these flowers.Clearly it likes to have its feet or at least its socks, wet.

There are actually two native Wild Blue irises, I. versicolor, and I. prismatica. I. prismatica differs in having very narrow leaves and somewhat more narrow petals. I don't know of it occurring in the wild in the Ottawa Valley, but if you can get a plant, it should do fine in your garden just like its cousin. These irises have fibrous roots like the Siberians, and can be handled in much the same way. They need dividing every few years to encourage blooming, but other than that, need little care. Full sun is best, but they can manage with dappled shade. They are not as susceptible to the various miseries that afflict Bearded Iris, another blessing.

If you love blue flowers, and what gardener doesn't, you need this one!
Posted by Lis at 4:16 PM