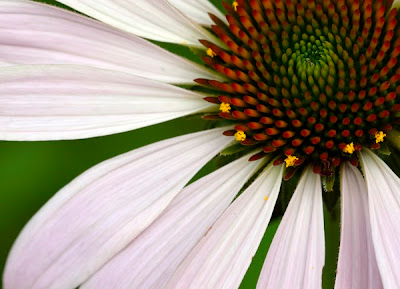 There are some plants in my garden that just seem to appeal to bees. Lavender is one - when it blooms the whole Herb Garden is alive with buzzing.  Sometimes there are several bees on one spike, every one of them concentrating madly on getting that nectar and not noticing that their spike is tipping right over. Another one they love is Lamb's-ears or Stachys. I like it too and have lots of it in my Hillside Garden. It looks so good with gravel that I can hardly pull out the seedlings that come up in the path.... But I have learned to cut the flowering stems down before they go to seed. The challenge is to do it without annoying too many bees!

Later in the season, the bees love the Coneflowers. I suspect they come for the pollen. If Echinacea flowers have nectar, and I don't know if they do, it seems to me it would be out of reach for any but the largest bees. But I'm not a bee, and don't speak 'bee', so I don't know.

I have six species of Coneflower in my garden. Of course the main one is E. purpurea, of which I have several cultivars. The original plants I grew from seed. They germinated easily and bloomed a year later. What surprised me though was that the next generation of seedlings (and there were many of them) included quite a lot of white ones. By this time, I had purchased a plant of 'White Swan' and was able to compare it with my white seedlings. On the whole, the seedlings are more attractive. They have yellow cones instead of White Swan's orange ones, and the petals are longer and more graceful. 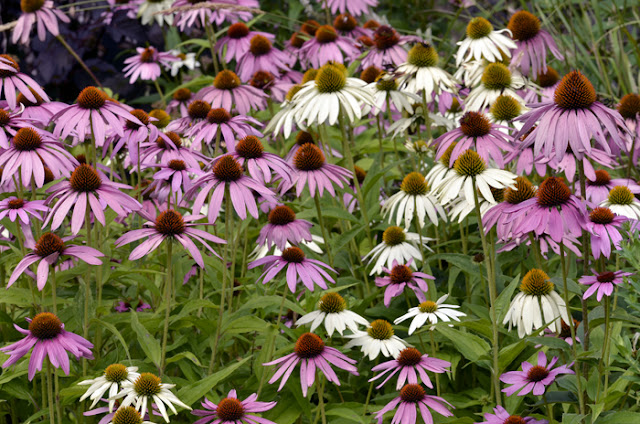 Both in the closeup to the right and in the larger image above, you can see that the cones on the white flowers are more yellow than the ones on the pink flowers.

I do find Coneflowers hard to place in the garden. They are an unusual sort of pink, pink with brown undertones, if you can imagine such a thing. August is the month of Phlox and Yarrow, and both of these clash dreadfully. I did once think an orange Daylily would be good with the Coneflowers, but not so. Together, they both looked dingy. Then I tried a yellow Daylily, and that was worse! The Coneflowers are rather muted colours, and are not enhanced by brighter flowers nearby.  Really, the best combination I have come up with so far is with the Ninebark 'Diablo'. It's leaves are a dark maroon-purple, but with brown undertones. These two are very good together. And because the shrub is always there, you have the bonus of not having to worry about it blooming at the same time as the Coneflowers. Actually, Echinaceas look their best with grasses, ornamental and otherwise.

Grasslands are in fact their natural habitat. There are nine species of Echinacea, all from the prairies or drylands of the middle of the North American continent.

Three of the species, E. atrorubens, E. laevigata and E. sanguinea, are native far to the South of us, and do not survive our cold winters.

E. tennessiensis, which is considered 'endangered' in its native state, will survive here, although I have only managed to get blooms on it once and the plants eventually dwindled to nothing. I must try them again, if I can get seeds.

A big difference between E. purpurea and its cousins is that it has a spreading root system while the cousins have taproots. The taproots make the plants very drought-tolerant, but also mean that nurseries find it hard to produce the plants in pots for the home market and that the gardener can't move the plants around easily. You have to put tap-rooted things where you want them and leave them there! That's a problem in a garden like mine, where the smart plants carry their passports at all times. 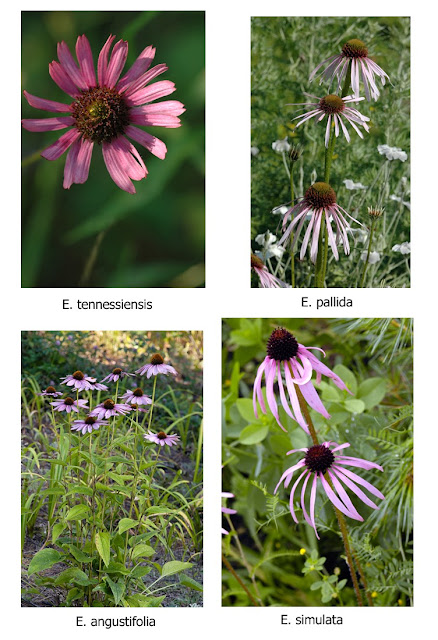 The difference between E. pallida and E. simulata is apparently in the colour of the pollen. E. pallida has white pollen (good match with the name!) and E. simulata has yellow pollen. I haven't been able to see this, as to me to pollen on both seemed a sort of pale yellowish-whitish grey..... maybe I need a bee to help me with this.

E. angustifolia is much like E. purpurea, but smaller, tap-rooted, and maybe a bit pinker in flower.

Of course, every family has one oddball, and the Echinaceas have E. paradoxa. It is yellow! 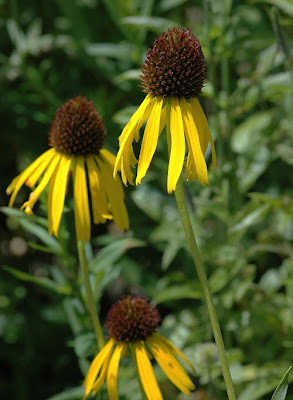 Probably, E. paradoxa has the genes that allowed the plant breeders to develop so many yellow, orange and red cultivars!