As some of you will remember, I was pretty annoyed last fall when She bought a new trowel. 'What am I,' I thought, 'chopped Daisy stems?' About the only thing I could do was ease my feelings a bit by hiding on her. I went down to, no, I'm not going to say. It was not under the weeds around the Pitcher Plants down by the bog. I might need to go there again. We older trowels can hide like that, we're not so shiny anymore.

Then one day She was growlin' around because She couldn't find me and wanted me for re-potting some ferns. Somebody (not my friend) suggested she use the new one, but she said, no, she wanted the old, experienced one. It was, she said, just right for those pots.

'Experienced???' What the hey does she think, what an insult, what nerve... after all my dedication, hard work, loyalty... wait. Isn't 'experience' a good thing?

Anyway, I stayed hidden. The two-foot deep layer of snow may have been a factor.

Then I kind of forgot about it and got back to work. There was a lot to do in the spring, you know how that goes in a garden. And since then I've been so doggoned busy I haven't even had time to check out the new inmate.

Yesterday I was sort of having a rest, down near the bottom of the potting soil bin. Not hiding, you know, just restin' up a bit after potting up about a million little Aquilegias. Maybe not a million, maybe only about 30, but you know I never went to school. Anyway, there I was having a well-deserved kip when I heard a little, gentle, voice say 'Hi there'. What??? I sat up, shook off the peat crumbs and looked around. Oh, my..... well, isn't that the cutest thing you ever saw.... Slim, shiny, with inches marked (shows intelligence, must have gone to school and studied science) and, get this, RED HAIR. 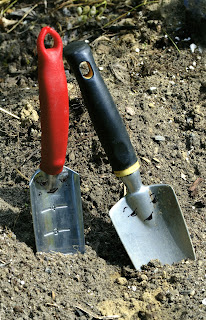 We had a little chat. We older guys know how to do that. I explained about how there are always an awful lot of baby ferns and native plants around here, and they always seem to need re-potting. I mentioned that I had told Her several times that there were just too many of them these days, she really ought to have another Sale and get rid of some of them, but she didn't seem to be listening. Anyway, I was able to give my new acquaintance some important tips about how to enjoy working here. She seemed to appreciate it.

Seems a little shy, though. Unless that is just natural born caution. Not a bad thing in a girl, especially a red head. I'll just have to move slow. You can come along, watch an expert, but remember, . wa-a-a-lk your ponies....
Posted by Lis at 8:38 AM