July in the Garden of Delight

In many ways, July is a difficult month in the garden. The weather is of course one factor: if it isn't a drought, it is a monsoon. This year we've been lucky enough to escape both, at least so far, but we've still had some torrential rains. 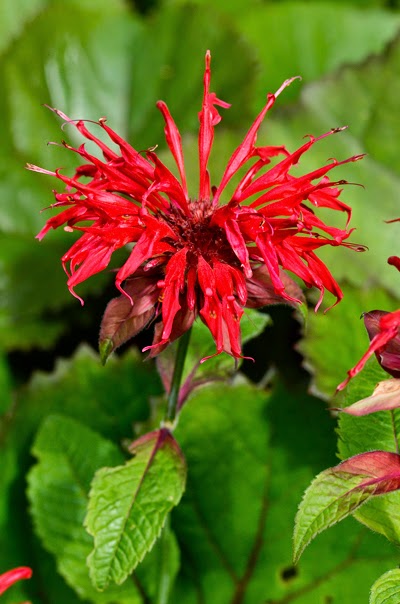 But of course what is hard on one plant is good for another. The roses are totally bedraggled after yesterday's heavy rain, but the red Monarda are looking fine. I have some growing in front of the huge leaves of Ligularia dentata 'Desdemona' (which, by the way, is exactly the same as L. dentata 'Othello', hmmmm, did someone get their Shakespeare confused?) and the two harmonize wonderfully. Luckily, the Monarda is finished blooming long before the Ligularia throws up its harshly yellow-orange ragged daisies which clash dreadfully with the red-purple leaves. You can always cut them off, of course.

Both plants like damp soil, so in dry years they struggle.

A painted turtle seems to like the grouping too. She's been hanging around for a few days now. Probably laying eggs, but the darn chipmunks usually find those. I waited and she obligingly came out of the flowerbed and onto the gravel of the driveway, but I couldn't convince her to put out her front feet. Not sure what that is all about! Were her feet tired from digging? 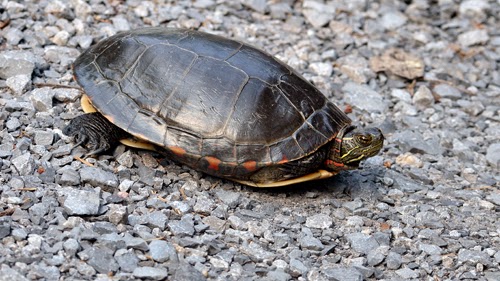 She's pretty tame, comes out to see what I'm doing it seems. Turtles apparently like lettuce so I'm going to try her with a leaf or two. 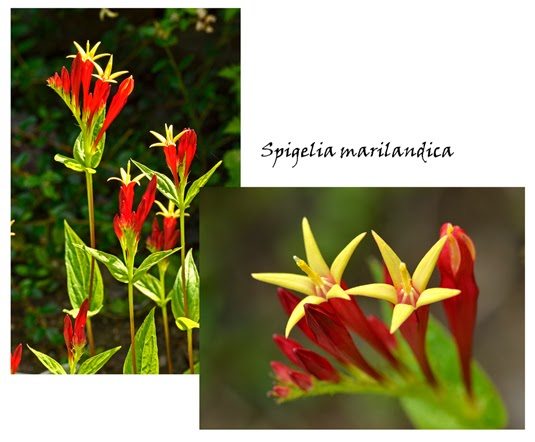 Another plant that is pretty happy with all the rain we've had is Spigelia marilandica, or Indian Pink. I wasn't too sure it would be hardy here, but my plant has come through two winters so far and seems to be getting larger. It's not native here in the Ottawa area, but is south of us. The plant is about 18" tall. The flowers do have a very, well let's say, odd, shape. The bunched anthers could be a moon rocket.... 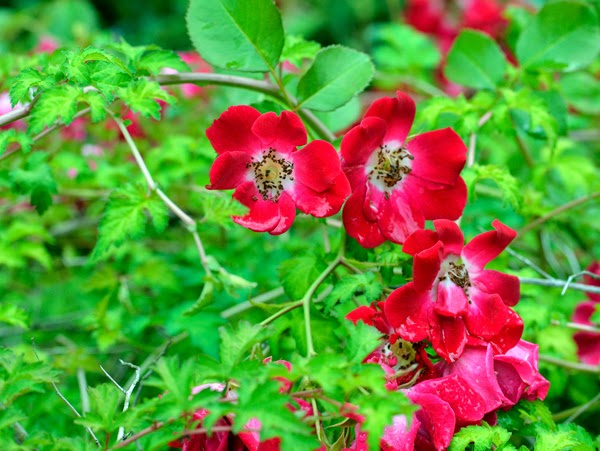 Right near the Indian Pink are two plants that have me in a bit of a quandary. One, the Stephenandra, is a very determined, light-green-leaved, arching-stems shrub. It forms low but dense prickly mounds. In the right place it makes a useful green blob. The rose, Dortmund, was a tiny seedling, on its own roots, and was planted several feet away. Naturally the two are now hopelessly intertwined. My quandary? Every time I see the Stephenandra I remember the kind friend who gave it to me.... and every time I see the rose I remember the nasty person I bought it from. For no reason, this lady felt the need to criticize me for growing roses that were not on their own roots.... it left a bad taste and over time I've quite taken against poor Dortmund. In my previous garden it was a favourite as it climbed happily all over a cedar fence. Can I like a rose that keeps bad friends? 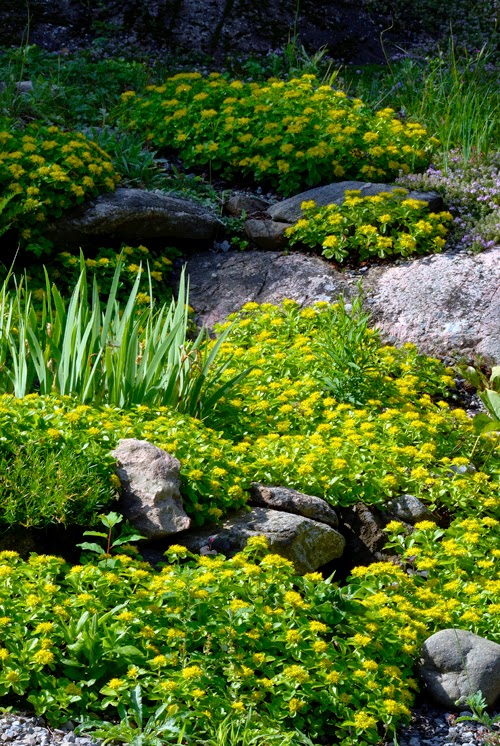 Speaking of friends, another one gave me this sedum and I love the way it has seeded itself in among the rocks in the rockery. It does need restraining sometimes, but then, Cecilia is a pretty high-energy person so it fits!

So many of July's flowers are yellow. I wonder how people who refuse to have yellow flowers in their gardens manage July? Or August? 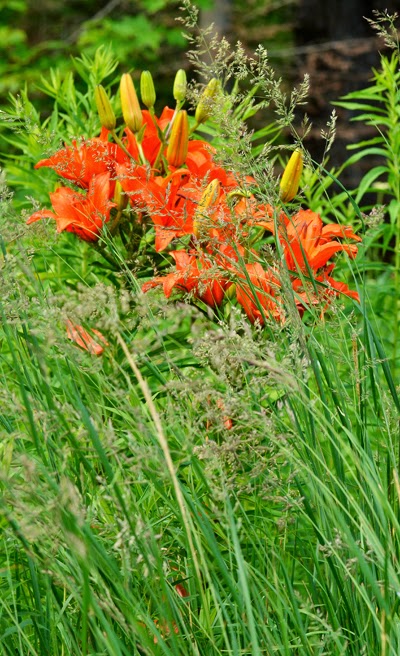 These orange lilies, while not yellow, look great in with the grasses. I love the way the grasses sway in the wind, now hiding, now revealing, the sturdy lilies.

These lilies were a gift too, but not from a friend. They were a prize I won for something or other once and since I'm not that fond of lilies, I stuck them in the sandy area behind the Studio. They've done magnificently there! Fully 4' tall, and a dozen blooms per stem. The original three bulbs are now at least six, too. Maybe I need to like lilies better!

There are some orange lilies in the Crabapple garden, too, but they are redder, have dots on the inside of the petals, and are quite short. For the life of me I can't remember where they came from. I must have planted them, but the mind is blank....
As it is about this plant: 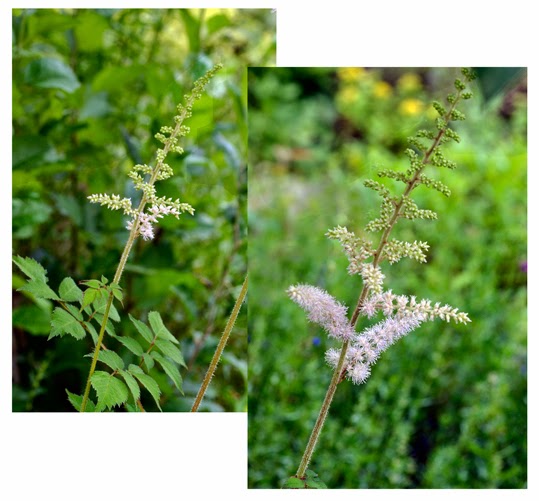 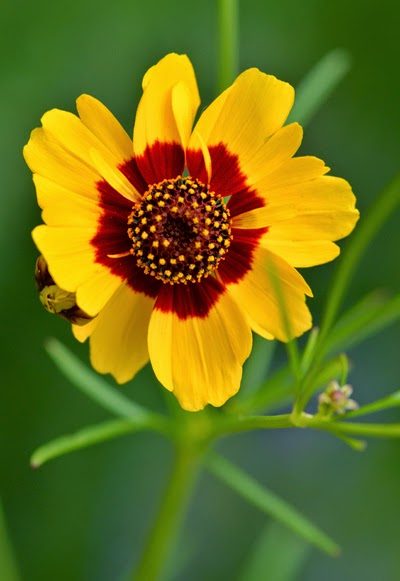 It came up in the middle of a patch of Hyssop. If you know what it is, please let me know! I should know, it looks familiar, but the name escapes me.

Last, but not least, I'm enjoying the Gaillardias and the Anthemises. Both self-seed and come up all over the place, but the variations in their colours are endlessly fascinating. 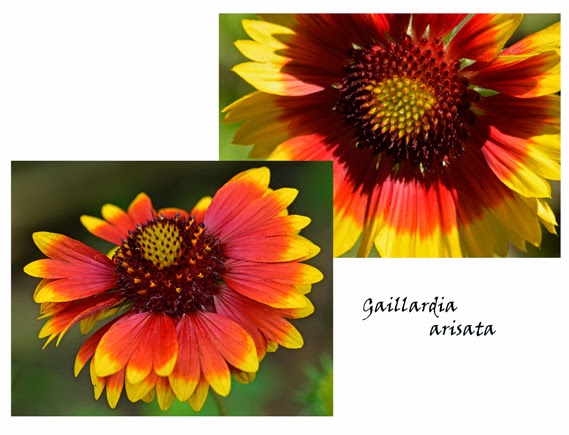 If your garden needs a smile, get some Gaillardias!
Posted by Lis at 10:54 AM